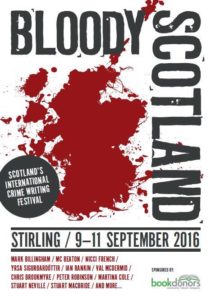 So this year’s Bloody Scotland festival is fast approaching – running from 9-11th September, I shall be there and if you are a lover of all things Crime Fiction I can promise that its definitely worth a visit. Great authors, great events, the fastest friendliest festival you could hope to attend and a banging good time from the moment you arrive until the moment you leave.

The entire programme can be found HERE but today Im starting a series of posts that will look at just a few of the great authors and the things going on, I’ve asked them the same set of questions to give you a taster, I’ll talk about a few of the events and lets see if we can’t tempt you to hop onto a train, plane or automobile and come along and join in the madness. In fact look you could win tickets to the opening reception HERE – go on give it a go.

The festival is relaxed so I am too and in that spirit I stuck a pin in the list of authors I’ve got for you and came up with Matt Bendoris and Neil Broadfoot – in a twist of fate they will both be answering the question How Tartan is your Noir on Sunday 11th at 10am (10am guys really? Best not stay TOO late at Crime in the Coo then) alongside Bill Daly and Aline Templeton – I’m definitely not missing THAT. 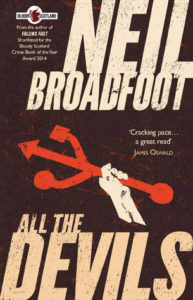 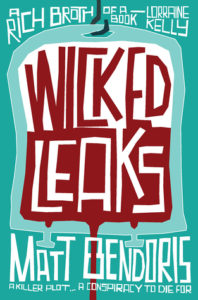 Matt’s latest novel is Wicked Leaks  – which I havent gotten around to yet having only just, because I’m so inefficient, read DM For Murder (review spotlight coming soon on that one) but its fast coming up on my reading list and having read the answers I got back to my little lead in interview I’ll be getting onto it very soon..

Could you tell us a little bit about your latest novel Wicked Leaks and what readers can expect from it, maybe about what originally sparked the idea?

It features a terminal patient with a terrible secret – he claims to have been involved in the ‘assassination’ of Princess Diana. He soon ropes his nurse into his web of conspiracies who ends up running for her life. The original idea came from my wife, a nurse, who used to sit with her dying patients overnight in their homes. It got me thinking ‘what if….’

I have always been a big Ben Elton fan…from his stand-up comedy days to his crime writing (although I doubt he’d call himself a crime author). I thoroughly enjoyed his last book Time and Time Again.

It’s my second time…I have written two books since the last time I attended so have plenty to gab about. Also, I’m not an author who takes himself too seriously, so hopefully we can have a bit of a giggle too.

David Cameron once threw me off a bus in East Kilbride. I kid you not!

You can purchase Wicked Leaks HERE

So Neil’s latest novel is “All the Devils” – which incidentally I’m reading right now and it is pretty damn good it has to be said, so here is what he told me about it and about some other stuff….

All The Devils is the third novel featuring Doug McGregor and Susie Drummond. When the book opens, Doug is struggling to come to terms with the events of my previous book, The Storm, and he’s not doing well. In pain, struggling to cope with a relationship he’s not sure he wants and a job he’s not sure he needs any more, he’s escaping into the bottle. But he has to put aside his own demons when Susie needs his help to investigate the brutal murder of her ex-lover. As a gangland power struggle erupts into violence on the streets of Edinburgh – and much closer to home – Doug and Susie’s already tense relationship is sorely tested. Together they confront a conspiracy that reaches deeper than either of them can image. They’re about to face All The Devils, the question is, can they survive?

This is a story that’s always been at the back of my mind since my debut. Falling Fast. Susie’s mistake with her ex was the event that, inadvertently, brought her and Doug together. I always knew there was a bigger story there, so this was a chance to go back and explore that. And, without giving the plot away, there are issues surrounding the use of sex as a weapon, sexism and the power of the past that I wanted to explore.

One book that had a profound effect on my work was The Ghosts of Altona by Craig Russell, which won the Bloody Scotland Crime Book of the Year award last year. I read it as we were doing an event together and I was hooked. It’s so much more than a crime novel, and it’s so brilliantly written, that it made me up my game for All The Devils, and hopefully that shows.

One of the best things about crime writing, especially Scottish crime writing, at the moment is that there is so much talent out there – and so much to pick from. Just look at the McIlvanney longlist this year, you can’t go wrong with any of them (except Douglas Skelton, the man is a menace and the bane of my life!).

I’ve always been a voracious reader, so almost anything goes. If I’m looking to relax, I love a bit of Arthur Conan Doyle or Robert Louis Stevenson. Away from crime, I cut my teeth on Stephen King so he’s always on my to be read pile.

It’s hard to believe that this will be my third year at Bloody Scotland – and the excitement shows no sign of waning. One of the best things about crime writers is the strong sense of community – apart from all the murder and mayhem on the page, crime writers are the nicest, most supportive people you can meet. And it shows at Bloody Scotland. Everyone is milling around, talking with other writers and readers. This year’s programme is utterly brilliant, and Stirling is just such a beautiful venue. To anyone sitting on the fence I’d say dip your toe in and you’ll be hooked – there’s something for everyone and everyone involved goes out of their way to make you feel included and welcome.

I ended up at the wedding of Gordon Brown (the former PM, not the writer) by accident.

Seriously, what is it with you guys and Politicians??

You can purchase All the Devils HERE

Thanks to both the guys for taking the time to have a quick chat. Tempted yet? Not sure? Well you know, more to come in a few days including Rachel Abbott, Tim Weaver, Doug Johnstone and many more. In the meantime do pop over to the Bloody Scotland website for more detail and follow them on the Bloody Scotland Twitter feed for updates and more information. Here are some pictures from last years event just to finish off nicely. 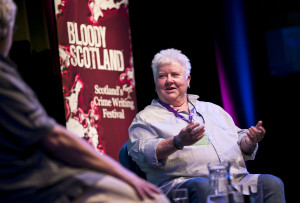 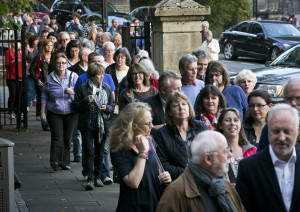 2 Responses to Bloody Scotland Part One – Whats Happening in Stirling…