Cherringham: A Murder for every month of the year… 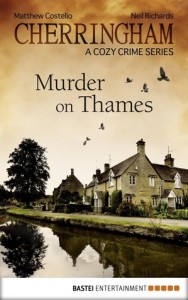 So I have not read episodic books since I avidly awaited each new instalment of “The Green Mile” by Stephen King many years ago now, but when I was offered the chance to have a look at a new series that is going to be released over the course of this year I jumped at the chance – they sounded perfect for Sunday afternoon reading. I read part one over the course of yesterday. To follow: Some information on the series followed by a review of the first instalment – Murder on the Thames.

Murder on Thames is the first in an innovative Crime series written in English but published by one of Germany’s leading publishers, Bastei Entertainment.

Published in English first, to be followed by German in March 2014, the crime series features 12 self-contained episodes written by co-authors Neil Richards (UK based) and Matthew Costello (US based).

In a revival of the Dickensian tradition, a new eBook episode will be published each month with the second episode, Mystery at the Manor, to be published in the UK on the 19th January 2014.

Cherringham is a quiet and peaceful town in the Cotswolds. Time moves slowly here, and nothing out of the ordinary ever happens, until one morning a woman’s body is discovered in the river. Sarah Edwards has just returned to Cherringham with her two children following the breakdown of her marriage. Sarah had been friends with Sammi Jackson – the woman in the river – before they both moved to London and she’s certain there is more to her death than meets the eye. But juggling the school run and her job as a web designer doesn’t leave much time to solve murder mysteries.

After the death of his wife, former NYPD homicide detective Jack Brennan has retired to Cherringham hoping for a quiet life. He soon realises “peace and quiet” isn’t really him and, despite his misgivings, he’s persuaded by Sarah to help her look into Sammi’s death. It quickly becomes clear that the case isn’t as simple as the police hope. From her violent ex-boyfriend to her alcoholic father, it seems everyone has something to hide. Sarah and Jack will need to use all their wits to get to the bottom of this case.

Thrilling, deadly and anything but ‘cosy’, Murder on Thames brings together the unlikely crime sleuth duo Sarah and Jack for the first in the ongoing Cherringham crime series.

Review: Murder on the Thames.

So, the first instalment in the Cheringham series finds us meeting Sarah and Jack – Jack a retired NYPD police officer who is now living in Cheringham and Sarah a single mother who has returned to her home village. When Sarah’s good friend is found drowned in the river, the police are quick to assume an accident – but Sarah is not so sure. With Jack’s help she sets out to track down the truth.

An unlikely pairing these two but a good one – I very much enjoyed their interaction and the mystery itself was well drawn and intriguing. As a set up for an ongoing novella series it was extremely well done – enough information about our main protagonists to ensure we want to follow on with them and an initial contact that makes us want to know more about their developing relationship.

Add to that a great little mystery written in old school style and you have much to look forward to. In the tradition of Midsomer and almost anywhere you might find Jessica Fletcher, I get the feeling that Cheringham and the surrounding area’s may not be a place you would want to live – but as a place to visit every now and then its going to be great.