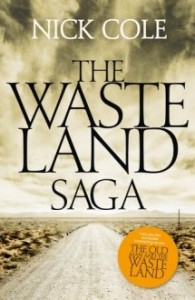 Thank you to Kate at Harper Collins for randomly sending me this terrific book.

Forty years after a devastating thermonuclear Armageddon, mankind has been reduced to salvaging the ruins of a broken world. In a style that’s part Hemingway and part Cormac McCarthy’s The Road, The Wasteland Saga chronicles the struggle of the Old Man, his granddaughter, and a mysterious boy as they try to survive the savage lands of this new American Dark Age.

This novel is made up of three interconnecting stories – The Old Man and the Waste Land, The Savage Boy and The Road is a River. Originally released separately, I was lucky enough to have all three in one go – Thank heavens!

As far as post apocalyptic fiction goes this is at the top of the game – Brilliantly involving, a realistic scenario and some tremendously well drawn characters make it a terrific read for fans of this genre and indeed anyone with a love for storytelling art. The author picks you up and puts you into a different world, paints you a picture and leads you through an amazing landscape where you will need all your senses.

This will have added depth if you  have read Hemingway’s “The Old Man and the Sea” which I also loved and also suffers inevitable comparison to Cormac McCarthy’s The Road (a book incidentally that I hated with every fibre of my being, an opinion that often gets me into trouble!)  but the tone and the feel of it for me was more “The Stand” which anyone who knows me well will be aware is my favourite book of all time. Since that novel only Justin Cronin with “The Passage” has come close to evoking the same emotional response in me – and now Nick Cole with this tale. That is perhaps the highest compliment I can pay and probably the easiest way to say how good I thought it was.

There is excitement and adventure here – occasionally an adrenalin rush – but tempered with periods of quiet contemplation and insight. The world the characters inhabit is a harsh one, but there IS hope here. It is a wonderful read. Thats about all I can say.