Cherringham. Interview with Jack and Sarah… 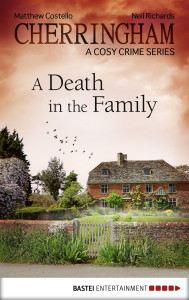 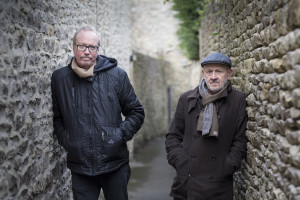 The Final episode of the Cherringham cosy mystery series is being released and to celebrate that and for something a little different, today I have an interview with the two main protagonists of those great tales – Jack and Sarah. Thanks to Neil Richards and Matthew Costello for being great sports – and if you would like to know more about how the series came about and hear from the guys in their own right you can read an interview I did with them last year HERE

The stories have been great, there are details on how you can get hold of them at the end and look out for more Cherringham news coming soon!

So, you two are an unlikely pairing, tell us a bit about how you first met…

Sarah: It was a few years back – I think both my kids were still at primary school – and an old friend of mine from school days was found down in the river by Cherringham Bridge. I was sure she hadn’t committed suicide – so I started digging around. Out of duty really – once upon a time she and I had been very close. Jack was living on his barge the other side of the river – I walked by, asked him if he’d seen anything unusual –

Jack: I seem to remember you were pretty rude that day –

Sarah: Ha, that’s exactly how I remember you –

Jack: Anyways… I didn’t think much of it. But I thought I’d take a look-see myself – and pretty soon I realised she was onto something. The girl – poor kid – had been murdered. And soon as I realised that – and saw that Sarah was fighting the war on her own, well… I guess I just – joined the team?

Sarah: Is that how it happened? I suppose so. We didn’t plan things. We just… got on with the job, and each other…

Jack: Once you got over the rude Yank bit –

Sarah: And once you got over the fussy English girl bit – hmm?

And Jack — tell us genuinely – what did you think of Sarah as a first impression?

Jack: To be honest – which, by the way, English people do say a lot – I did think she was a little… brusque? That the polite word? At first. But I could also see she was very sharp – and tough too. Very protective of her kids. Good sense of humor.

I guess it’s only fair therefore to ask Sarah the same question….

Jack: Hmm, well, maybe then – but I’d only been here a few months –needed to acclimatize a bit.

Sarah: I know. You’ve got over it. Sometimes I think you’ve nearly got used to living here.

Jack: I’ll certainly never stop liking living here. But that oyster cocktail sauce thing – I mean really – how hard can it be?

You are always getting caught up in murder – do you sometimes feel like you are living in Midsummer? Or perhaps that Jack might be a distant cousin of Jessica Fletchers….

Sarah: No. Me neither. What an odd question!

After all you have been through, how would you describe your relationship now in comparison to all that time ago when Sarah’s friend died in the river?

Sarah: Come on. Jack’s at least a hundred years older than me.

Sarah: What are you looking at me like that for?

Jack: Though we’re both single, I’m not in the market for relationships. And I’ve never asked Sarah if she is.

So you’re not soul mates?

Sarah: Can you be soul mates without having to bare your soul all the time? We’re very close – and we really understand each other.

Jack: And we never stop enjoying hanging out together.

Sarah: Working together. I guess – we’re like good work mates.

Which case has been your most challenging? Both individually and together?

Jack: Oh that’s a tricky one. I think any time we’ve had to make a tough call at the end about bringing in the police.

Sarah: Once or twice we’ve looked at each other and thought – does anybody benefit by putting this person in gaol? Has justice already been served?

And what does the immediate future hold?

Jack: Well, I’m going to have to take the Fifth on that. There are changes coming. But I can’t really say what they are…

Sarah: Not even to me?

Jack: Oh you’re fine – I’ll tell you. But this blog – hmm, next time maybe… Sorry! All I can say is – there’s a lot more Cherringham to come…

The final episode of Cherringham, A Death in the Family is published today by Bastei Entertainment, price £1.49 in eBook

You can purchase all the Cherringham stories HERE.