Written by Neil Richards and Matthew Costello, the Cherringham series of cosy mysteries featuring web designer Sarah and American Ex cop Jack launched again yesterday with the latest instalment, A Lesson in Murder. These are great little stories which I have enjoyed thoroughly, so please do take a look. 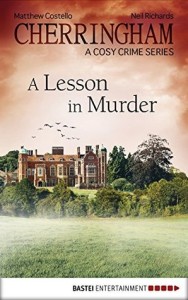 When Jack and Sarah are called in to investigate mysterious pranks at an exclusive girls’ private school, it seems at first that it might be the work of a few mean pupils with a grudge. But things quickly turn serious when a popular teacher meets a sudden, violent death. Now, with murder in the air, Jack and Sarah have their own lessons to learn about the Cherringham Girls School, its dark secrets… and who wanted that teacher dead before they learned the truth.

— Cherringham is serial novel à la Charles Dickens, with a new mystery thriller released each month. Set in the sleepy English village of Cherringham, the detective series brings together an unlikely sleuthing duo: English web designer Sarah and American ex-cop Jack. Thrilling and deadly – but with a spot of tea – it’s like Rosamunde Pilcher meets Inspector Barnaby. Each of the self-contained episodes is a quick read for the morning commute, while waiting for the doctor, or when curling up with a hot cuppa.

— Co-authors Neil Richards (based in the UK) and Matthew Costello (based in the US), are known for their script work on major computer games. The Cherringham crime series is their first fictional transatlantic collaboration

I interviewed Neil and Matthew a while ago and it made for fascinating reading.

What gave you the idea to write a series together?

Matthew: Neil had been talking to people at Bastei Luebbe who wanted to create an episodic cosy mystery series, set in the UK. We on our own had been discussing a different kind of sleuthing ‘team’, so as talks went along we started to work on a small outline of what would become Cherringham, anchored by the fact that the team would be the retired NYPD detective, Jack Brennan, working with single mum, Sarah Edwards.

Neil : Matt and I have worked together as TV writers since the late 90’s and even from the beginning we’ve been looking for a format which takes advantage of my UK background and his life-long knowledge of New York. We wrote a YA novel together last year and realised that we could use the same writing processes we developed for TV in the world of mystery crime novels.

A lot of people are interested in how it works – do you each write for separate characters and/or parts of the plot? Chapter by chapter?

Matthew: Ideally, and when we can, we brainstorm ideas in person, snippets really, of what would make a good mystery.

Then — again best face to face — we begin to zero in on those that most interest us and seem to best fit the Cherringham world. The outlines have been fairly detailed, though writing does change everything. But that level of detail allows us to swap pages back and forth., usually after 25-30 or so. We edit each other before hitting new pages. And in a month’s time—you have a new Cherringham mystery!

Neil: Sometimes we have to make do with Skype. But for Cherringham we’ve rented cottages in the Cotswolds for a week at a time and spent full-on days building the world, finding the characters, looking for story ideas etc. It’s vital that we both ‘see’ the same world. In fact, our fictional Cherringham has become so detailed that we’ve had to create a street map for the village marked with characters (80 so far and counting) plus unfortunate victims of course…

Are you fans of cosy mysteries yourself – or perhaps Agatha Christie?

Matthew: I just gave a speech on the series aboard Queen Victoria (where we arrive at Easter island tomorrow)…and someone asked that very question. Before I began writing, I devoured everything. I had my favourite genres….horror, suspense, SF…. but loved Holmes, Agatha Christie, Dorothy Sayers, and a host of other mystery writers.

With my first novels, I was pulled into what seemed like a best fit for me, suspense and horror—which is a very different style. But this collaboration has allowed me to play with Neil in a world, and with a tone and voce, that I love.

Neil : I grew up in a house full of books – and my parents were both lovers of crime fiction. So I’ve inherited shelves of green Penguins. Many of those great mystery writers were my first adult fiction – and since then I’ve also become an inveterate crime and thriller reader. Before embarking on this series I went back into some of those classics – Josephine Tey, Margery Allingham, Ngaio Marsh etc. And of course Agatha Christie.  I’m avoiding contemporary cosies – I really don’t want to steal someone’s plot by mistake!

Is there a lot of future planning involved for Jack and Sarah or is it more organic?

Matthew: Think I hit this a bit above…we have a host of possible mysteries. We are currently finishing #6, and number 7 has a pretty solid outline. But should the series continue, or even morph into full-length novels, we have a lot of ideas. And like a lot of reviewers and readers, we’ve grown to love our characters, the village and of course the mysteries!

Neil: Yes, as Matt says – we’ve fallen in love with the world and the characters.  In our first week of planning we came up with around 30 plots.  And – this is something we learned in TV – if the stories come thick and fast then you can really tell that the architecture of the world is solid.
It would make a great TV series – if you could cast it who would you give the lead roles to?

Matthew: I might be telling tales out of school, but for Jack Brennan, Tom Selleck would be perfect. You can ‘hear’ him saying Jack’s lines. For Sarah—I would defer to Neil (in my mind I see a younger Emma Thompson…) Perhaps Kate Winslet?

Neil : I feel I really know Sarah the single mum, whose real-life obstacles will be familiar to anyone who’s got teenage kids (I have two!). Matt’s right about Kate Winslet – she is about the right age. But I’d rather stay out of the casting game – I’m happy for the Sarah in my head to remain anonymous!
Favourite author/comfort reading.

Matthew: After devouring all genres, all the great authors, I have become a rather committed reader of non-fiction. I think (or believe) this is because when I read fiction…it draws me back to my own work, problems unsolved, plot points needed…and then there’s the matter of comparing the writing (mine versus whoever)…and suddenly, it’s definitely not r&r.

So for me, history, biography…current amazing and string recommendation, The Trip to Echo Spring,  by Olivia Laing, a book on the lives of some of America’s most important writers (Hemingway, Fitzgerald, etc) and their relationship to drinking. The tales are incredible, the insights marvellous…and the author’s writing is so clear and powerful. Best book I’ve read in a long time.

Neil : Well, I’ve worked my way through Scandi-crime (I fell in love with Wallander years ago)… If there’s a Jack Reacher at the airport that I haven’t read I’ll definitely grab it. I absolutely love the works of Alan Furst. Right now I’m in the middle of Pat Barker’s Regeneration Trilogy, triggered by the current WW1 anniversaries – serious bed-time reading to stop my wife telling me that all I ever read are thrillers…

Dream job if you were not a writer.

Matthew: Gee. I have been a teacher, which I loved. And I could still love it. Kids, not adults. They are a gift to work with.

Neil : I’ve had a spell as a university teacher. I do like mentoring – especially to do with my first love, movie screenwriting.  Should have been an actor? Would love to be a director…

Matthew: On each and every Sunday, my wife and I run a program, gratis, where we have been trained to help family members deal with their loved ones who have mental illness. (For information see; www.neabpd.com)

Not exactly relaxing, but to help people in a world where such help is rare….that is another gift. Then home to a yummy lunch (I cook!), shovel snow (that’s all it does in NYC anymore!), play a round of one of my miniature wargames (shh…don’t tell anyone) then, as the sun sets, like our hero Jack, a pre-dinner martini with my wife.

Having written the above, does not sound like such a bad way…to spend a Sunday.

Neil: I’m terrible at taking time off.  Takes at least a week on holiday before I stop urging the family not to get up early and go off to ‘see things’.  Just have to be active – the result of doing a job which involves sitting at a keyboard for long days.

So I guess I’d start with a run (I’m so lucky, living in the New Forest that I have my own deserted trails to run), long bath, ALL the Sunday papers… Better still all the family would be home (my eldest is now off at uni) so a busy lunch then a walk (if I can drag the mob with me) then Sunday roast. Like Matt, I’m the cook in the family – we’re very careful when we cook for each other, I can tell you!

The first book in the series is Murder on the Thames