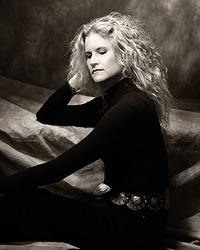 As part of the Cold Moon Blog Tour I am really happy to review all 3 books in the series so far – a series that I would HIGHLY recommend – a great depth of plot and character makes them must reads for any crime fiction fan.

FBI Special Agent Matthew Roarke is closing in on a bust of a major criminal organization in San Francisco when he witnesses an undercover member of his team killed right in front of him on a busy street, an accident Roarke can’t believe is coincidental. His suspicions put him on the trail of a mysterious young woman who appears to have been present at each scene of a years-long string of “accidents” and murders, and who may well be that most rare of killers: a female serial.

So Huntress Moon has gone straight into the running to be in my top 10 of the year – a completely involving and utterly brilliant crime novel that takes the “Serial Killer Thriller” and redefines it – a heart stopping and emotional reading ride that will keep you up into the early hours.

The main hook into this story is the two main characters who are superbly well drawn and utterly engaging. Matthew Roarke is an FBI agent who has left the world of profiling behind. Now working on Major Crime, a series of events throws him back into the murky world of killers and their motivations. Enter our killer, a beautiful and enigmatic woman who has been completely off the radar until a chance encounter puts her in the path of Matthew. So begins a cat and mouse chase which will have you avidly turning pages, desperate to know who she is and what she is up to.

This is so beautifully constructed, showing us first one then the other of our two protagonists, slowly drip feeding information and background to both, all the while keeping the action going and often really tugging on the heartstrings. There is a great depth to the writing that pushes this above the level of a standard thriller, a real sense of authenticity and some truly heart stopping moments, all wrapped up in an intelligent storyline that just grabs you right by the throat.

Some really intriguing strands run through it as well, haunting themes and thoughts on the true nature of evil – it just gives the whole novel an added layer that will make you shiver – frightening and atmospheric throughout this was a truly addictive novel from first page to last.

Overall then an intense and vivid crime mystery with an interesting twist and basically just a darned good yarn. It’ll get you!

Twenty-five years have passed since a savage killer terrorized California, massacring three ordinary families before disappearing without a trace.
The haunted child who was the only surviving victim of his rampage is now wanted by the FBI for brutal crimes of her own, and Special Agent Matthew Roarke is on an interstate manhunt for her, despite his conflicted sympathies for her history and motives.

This series has, so far, been totally brilliant. Huntress Moon, pitch perfect part one, set us up for Blood Moon which is simply superb – a rollicking roller coaster ride of a novel with some hugely compelling characters and a story arc that will leave you breathless.

Redefining the serial killer thriller is no easy task believe me, I’ve seen it all over the years, but with the Huntress/FBI Thrillers Alexandra Sokoloff has done just that – creating in Cara Lindstrom a killer like no other – she is intensely fascinating, completely believable and absolutely sympathetic.

Her “relationship” with Roarke, our man at the FBI is gorgeously complex, beautifully captivating and a huge strength of the series – it draws you in, makes you pause for thought and is so riveting that you will barely glance up from the page.

Add to that a fast paced and highly intriguing mystery element in the cases surrounding these two and you really do have a unique addition to the crime genre, one that I would highly recommend.

The hunt for mass murderer Cara Lindstrom is over. FBI Special Agent Matthew Roarke has been working for this moment: the capture of a killer who savagely hunts the worst of humanity. But Roarke remains traumatized by his own near-death at the hands of the serial killer who slaughtered Cara’s family…and haunted by the enigmatic woman who saved his life.

Words really can’t express how much I’m enjoying this series – seriously addictive, most terrific storytelling and a real dark side that appeals.

So this is the third novel to feature the serial killer who isn’t, Cara Lindstrom and her befuddled would be captor Agent Roarke. In this instalment Cara is in jail but of course this is Cara we are talking about so how long she is likely to be there remains to be seen. Roarke meanwhile still fights his inner demons and considers crossing some more lines as he heads into another emotive case.

Cold Moon delves yet deeper into the underbelly of society, dealing as it does with the world of pimps, child prostitution and kidnapping – Alexandra Sokoloff has a real feel for her subject matter, a depth of perception that comes across so well in the thoughts and actions of her characters and the consequences that follow. As I said in my review of book 2, redefining the serial killer genre is no easy task, to do it as well as sending a strong moral message is even harder and yet that is exactly what happens within the narrative of all the huntress/FBI Thrillers.

There is also a beautifully constructed mythology developing here just below the surface of obvious – most especially within Cara’s view of the world and her redefining of evil. What it is, what it means. She is the very definition of a strong female lead – yet she is not the heroine. Or is she? Therein lies the real addictive quality of this series – almost every character walks a very fine line.

I honestly think these are superb. Getting better if anything with each new story, I am utterly entranced by this world and the people in it – authentic and downright scary if you think too deeply about it,I cannot recommend it highly enough. 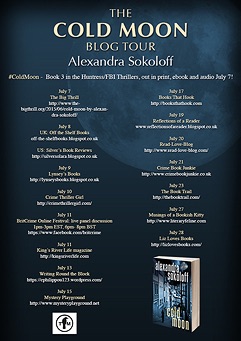