Competition Time! Get your dancing shoes on… 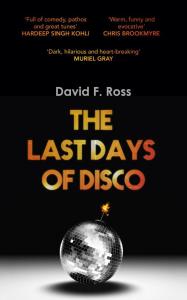 The Last Days of Disco by David Ross is now available as an e-book. I LOVED it and a full review and hopefully other little treats such as an author interview will be appearing in the new year in time for the Paperback release – but for NOW how would you like to win your very own E-copy and enjoy an emotional, nostalgic, often funny and always heartfelt story. You will ESPECIALLY love it if you grew up in the eclectic 80’s with its peculiar brand of music and mayhem (remember the hair folks!) but equally this is a story for all time and all ages.

SO what do you have to do? Well, you have to Tweet me @Lizzy11268 using the hashtag #DiscoDays and tell me your favourite musical memory. Include the publisher @OrendaBooks and the best one will win a copy of the novel.

The competition closes on Friday 19th December at 5pm and winners will be announced shortly after that. Not yet convinced? Here is some more information, including a purchase link in case you just can’t wait.

Early in the decade that taste forgot, Fat Franny Duncan is on top of the world. He is the undoubted King of the Ayrshire Mobile Disco scene, controlling and ruling the competition with an iron fist. From birthdays to barn dances, Franny is the man to call. He has even played ‘My Boy Lollipop’ at a funeral and got away with it. But the future is uncertain. A new partnership is coming and is threatening to destroy the big man’s Empire … Bobby Cassidy and Joey Miller have been best mates since primary school. Joey is an idealist; Bobby just wants to get laid and avoid following his brother Gary to the Falklands. A partnership in their new mobile disco venture seems like the best way for Bobby to do both at the same time. With compensation from an accident at work, Bobby’s dad Harry invests in the fledgling business. His marriage to Ethel is coming apart at the seams and the disco has given him something to focus on. Tragic news from the other side of the world brings all three strands together in a way that no one could have predicted. The Last Days of Disco is a eulogy to the beauty and power of the 45rpm vinyl record and the small but significant part it played in a small town Ayrshire community in 1982. Witty, energetic and entirely authentic, it’s also heartbreakingly honest, weaving tragedy together with comedy with uncanny and unsettling elegance. A simply stunning debut. ‘Full of comedy, pathos and great tunes’ Hardeep Singh Kohli ‘Warm, funny and evocative. If you grew up in the Eighties, you’re going to love this’ Chris Brookmyre.

About the Author: David F Ross

I was born in Glasgow in 1964 and I lived in various part of the city until the late 70’s. I subsequently moved to Kilmarnock where I have lived since. I was educated at James Hamilton Academy until being politely asked to leave.
(Expulsion is such a harsh word, isn’t it?)
Following a frankly ludicrous early foray into sporadic employment (Undertakers, Ice Cream Parlour, Tennis Groundsman, DJ…I’ll save these stories until I know you better) I found myself at Glasgow School of Art, studying architecture.

In 1992 I graduated from the Mackintosh School of Architecture. I am now the Design Director of one of Scotland’s largest, oldest and most successful practices, Keppie Design. (Funny old world, eh?)

I have worked all over the world and I led our practice strategy for projects in countries as diverse as China, Egypt, Malaysia, India and Libya. I am a designated business leader for East Ayrshire Council, a Board Mentor for Entrepreneurial Spark and I was design advisor to Strathclyde Passenger Transport for their modernisation programme of the Glasgow Subway in advance of the 2014 Commonwealth Games.

I’m married to Elaine and I have two children, Nathan and Nadia, who have both signed legally binding agreements to house me in the best Old Folks Home my money can buy. I’m a Chelsea fan – from long before the cash-rich days – and I occasionally write stream-of-consciousness rubbish for @ByTheMinChelsea and other @ByTheMinSport feeds on Twitter.

My most prized possession is a signed Joe Strummer LP, and The Last Days Of Disco is my first novel.