Liz Currently Loves….Alice and the Fly by James Rice. 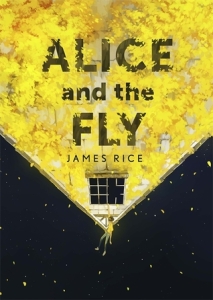 Miss Hayes has a new theory. She thinks my condition’s caused by some traumatic incident from my past I keep deep-rooted in my mind. As soon as I come clean I’ll flood out all these tears and it’ll all be ok and I won’t be scared of Them anymore. The truth is I can’t think of any single traumatic childhood incident to tell her. I mean, there are plenty of bad memories – Herb’s death, or the time I bit the hole in my tongue, or Finners Island, out on the boat with Sarah – but none of these are what caused the phobia. I’ve always had it. It’s Them. I’m just scared of Them. It’s that simple.

Another book that stunned me into silence (and believe me that is not the easiest thing to achieve) Alice and the Fly really is a most amazing read – immediately addictive, haunting, terribly authentic and with some beautifully written prose and an almost creepy, unsettling ambience this will draw you in and hold you there throughout.

Told mostly by Greg through his “diary”  he paints a picture of an isolated life – Greg has issues, he is the loner, the “strange” one – his peers refer to him as “psycho” and his parents tend to ignore him as much as possible. The world seen through Greg’s eyes is a strange, unbalanced one, yet often unknowingly insightful when it comes to the people around him, his way of describing things will leave you feeling off kilter but entirely fascinated.

It is a difficult one to review, mainly because I’m loathe to tell you anything much about the plot – I quite honestly think the less known about anything here the better it will be for the reading experience. It is the tale of a boy on the edge and touches on many themes, all of them important and relevant, given a true, resounding and emotional voice through young Greg, a character you will be utterly utterly engaged and enchanted by.

I’m aware from the blurb that came with the copy that the author has used some of his own experiences to colour the narrative and this shines through in the absolutely realistic feeling that you get from the story, you really could be reading a real account from a real person, facing real problems and emotions. The last few chapters had me gulping in air as I waited on tenterhooks to see what the outcome would be, where Greg would end up, what would happen to him and to others, it was impossible at this stage to put it down even for a moment.

I’ll be honest and say I’m not really sure what I was feeling at the end. Slightly heart broken, definitely a bit teary eyed, and a pure mix of other emotions that won’t come out in words. A beautifully written, haunting, evocative and immensely accomplished tale which I THINK is mostly about perception and love but who am I to put a label on it? Unbelievable for a debut, this is a novel that demands that you make people read it –  James Rice is one to watch. No doubt in my mind. Don’t miss it.

Highly Recommended. 5 bright shiny stars and some kittens for this one.

2 Responses to Liz Currently Loves….Alice and the Fly by James Rice.