Conflicts of Interest: Getting to Know You with Terry Stiastny 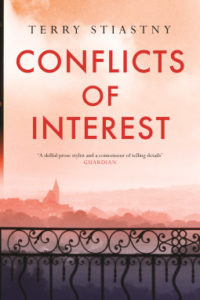 Very pleased to welcome Terry to the blog today as part of my “Getting to Know You” feature. Welcome!

Conflicts of Interest is a story of two friends, one a journalist, Lawrence Leith, who’s down on his luck, the other a PR man, Martin Elliot, for whom everything seems to be going perfectly. When they meet again in the south of France, an accident sets off a course of events which show that Martin’s life doesn’t correspond to the image he presents. They both live in a world of politics and the media where image is everything and friendships can easily be betrayed.

I grew up in Guildford, in Surrey. My father’s Austrian and my mother’s Scottish but spent her childhood in Asia; they met in Vienna and moved to Canada where they got married and I was born. We returned to the UK when I was a baby. So I had a fairly conventional English Home Counties childhood, but always with a sense that I might easily have been living somewhere else and might have grown up differently as a result. My British grandparents had spend years abroad and we often had friends and relatives from Austria visit, which added to that feeling of having slightly different horizons.

Both, really. I was very academic and loved history in particular, but I also used to love drama and taking part in school plays, either on stage or behind the scenes. I used to write for school magazines and set up official and less official school newspapers, with varying degrees of success.

It’s always been writing in one form or another. I still have handwritten or laboriously typed ‘novels’ and screenplays that I wrote as a child. As a teenager, I wanted to be a film director and screenwriter. Later, as I became more interested in politics, I decided that I wanted to be a journalist, which is what I did after university.

I recently found a copy of what I’d called ‘Terry’s only book’, a version of Beauty and the Beast, partly written, partly typed, pages stapled together. I must have written it when I was about four or five. I can’t remember a moment that I didn’t want to write, to be honest. I was always writing stories from as soon as I could.

Vaclav Havel, the Czech playwright turned hero of the Velvet Revolution and then President. In literary terms, John le Carre.

I remember once falling into the river next to a pub garden — I was jumping from a boat to the bank, I would have been about seven — and feeling more embarrassed at my Mum’s rush through the garden to rescue me than I was worried about being in the water. I’m so terrified of embarrassment that I’ve wiped any later incidents from my mind…

I was a radio reporter for a long time so I became OK at wiring things up and solving computer problems, mostly through trial and error. So I’m the person in the household who often sorts out the tech. I’m less good at anything properly old-school practical. I can build self-assembly furniture but that’s about the limit of it.

Anything except a lark. I’m not a natural early riser, but I’m happy to be out in the sun and I don’t mind staying up late — though not as late as I used to.

The saddest book I’ve ever read is Thomas Hardy’s Jude the Obscure. The awful waste of human potential made me despair, and ‘Done because we are too menny’ almost makes me cry just thinking about it.

Scoop, by Evelyn Waugh, is both the funniest and one of the truest books about journalism ever written. The technology may have changed a bit from when William Boot set off for Ishmaelia with his cleft sticks but the characters he meets are still familiar.

I generally don’t think I’m qualified to give people life advice, so I try not to do it often. One saying that I’ve sometimes found helpful, though, is not to judge the inside of your own life by the outside of someone else’s.

It is 2010 and failed war correspondent Lawrence Leith has retreated to a small town in the French countryside where he is taking refuge after the end of his marriage and the loss of his job.

When a friend from the past arrives in town, he stirs memories that Lawrence has been trying to forget; memories of a dusty road in the Congo where everything went disastrously wrong. Martin Elliott is convinced that what Lawrence needs is to get back in the game but when that involves returning to Africa, Lawrence isn’t convinced. That is until he meets Isabelle Vernet, the woman leading the trip.

When Martin goes missing, Isabelle’s and Lawrence’s lives are thrown together in ways neither of them could have imagined and when the lies that bind the three of them together start to unravel, truths are revealed that no one could have expected. 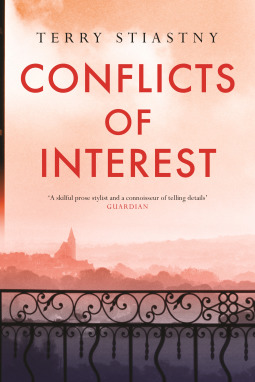