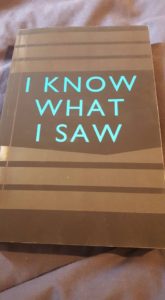 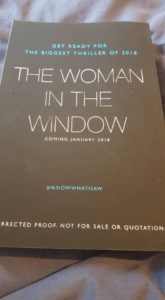 Anna Fox lives alone, a recluse in her New York City home, unable to venture outside. She spends her day drinking wine (maybe too much), watching old movies, recalling happier times . . . and spying on her neighbors.

Then the Russells move into the house across the way: a father, mother, their teenaged son. The perfect family. But when Anna, gazing out her window one night, sees something she shouldn’t, her world begins to crumble and its shocking secrets are laid bare.

So now we are midway through the year I’m hoping you all have managed to read some of the great titles from last year’s “ones to watch” list – so its time to kick off the feature that will tell you about some of the best books you can look forward to NEXT year. And let me tell you based on what I’m seeing, once again 2018 is going to up the ante on addictive and brilliantly written reads…

Talking of which, January will see the release of A J Finn’s “The Woman in the Window” an ode to Hitchcockian film noir and a genuine page turner. Featuring a hugely engaging unreliable narrator in main protagonist Anna Fox and delivering a plot twistier than a truck full of pretzels, The Woman in the Window is chock full of beautifully considered prose, atmospheric scene setting and a fair few moments that will have you emotionally traumatised.

Rear Window being the obvious inspiration, AJ Finn takes that psychological dramatic element and runs with it – there is a very visual quality to the writing, almost like watching a movie (and hey you’ll be able to do that too, this having been picked up by Fox)  but he does what a movie cannot do as well, taking you deep into the psyche of his main character and by means of telling her story, the psyche of those she watches.

Utterly gripping, beautifully voyeuristic and best of all insanely well written, The Woman in the Window is unpredictable, intense and ultimately lead to one of the best reading day’s I’ve had in ages. By the time I finished it I was literally on the floor. I love those moments so AJ Finn gets the first Gold Star of 2018 from me.

There will be more, one of which I’m reading right now (watch this space) but they say you never forget your first. So don’t forget this – The Woman in the Window. One to sink into in 2018. And hey, just after Christmas too. We all need a pick me up. This will pick you up then probably throw you out feeling slightly dazed but it’ll be worth it I promise.

You could Follow AJ on Twitter for updates and Pre-Order The Woman in the Window so you don’t forget. I will certainly be picking up a hardback edition for my collection because I’ll be reading it again for sure, it being perfect for those second read nuances.