Dying For Christmas with Tammy Cohen 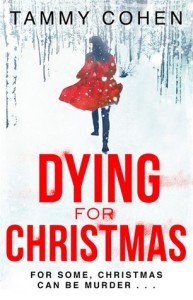 So I recently read this terrifically addictive novel and I caught up with Tammy to ask her some deeply insightful questions. Kind of. About the book and about Christmas in general. Here is what she had to tell me.

Christmas – the time of goodwill to all men, so I’m dying to know what got you started on a festive kidnap and torture tale?

When my editor asked if I wanted to write a Christmas crime book, the one thing I knew immediately was that I didn’t want it to be cosy crime – The Case of the Missing Manger or Carnage at the Christmas Fair. What I wanted was to write an anti-Christmas book. One that subverted all the things we hold most dear about Christmas – family, warmth, love, community. Which is why poor Jessica Gold ends up being held prisoner by a complete stranger in an anonymous, resolutely unfestive warehouse apartment far from her boyfriend and family. There’s nothing merry about Jessica’s Christmas.

The Christmas gifts Dominic gives to Jessica are horrifically engaging – did you come up with those as you built his character?

Yes, Dominic’s presents to Jessica tell the story of his nightmarish life. They’re his cack-handed attempt at making himself fully known to another person, to alleviate some of his loneliness. So the presents build in intensity and horror as they go along.
Who was your favourite to write – Jessica, Dominic or Kim. Or someone else?

Definitely Dominic. I’d never written an out and out bad person before, and had no idea how much fun it was. For once I could turn off that questioning, moderating voice you always have in your head as a writer – is this how someone would react? Is this plausible? Dominic is an anomaly, an outlier, a psychopath. Everything he does is outside of normal, acceptable rules of behaviour. Plus though he seems superficially charming and urbane, he’s essentially a child still, trapped by his horrendous upbringing in a toddler mind-set where everything is about him and his own gratification and other people’s feelings are meaningless. All that made him a fantastically satisfying character to write.

Did you have that ending in mind right from the start?

Amazingly, and very unusually for me, I had the whole book planned out before I started. I think it’s because it had to be written very quickly so I knew there was no time for exploring different avenues or testing out different outcomes. Also it was my first foray into crime and I realised it was a very different discipline – everything has to lead onto something else, all the loose ends have to be tied up – so I needed to be very sure in my own head where it was all going.
Christmas day – Dinner or Presents first?

Oh please. I have three kids and even though they’re not technically children any more (22, 19, 18) if I told them they had to wait until they’ve eaten before opening presents, there’d be carnage of a magnitude Dominic Lacey couldn’t even imagine!

Bucks fizz in the morning. Whiskey and ginger in the pub in the afternoon after the obligatory wind and rain-lashed dog walk.

Making our dog Doris wear novelty Christmas antlers. She’s quite the silliest looking dog without them, but with them she’s out of this world.

Thank you so much Tammy!

I am missing. Held captive by a blue-eyed stranger. To mark the twelve days of Christmas, he gives me a gift every day, each more horrible than the last. The twelfth day is getting closer. After that, there’ll be no more Christmas cheer for me. No mince pies, no carols. No way out .

But I have a secret. No-one has guessed it. Will you?

Loved this clever and addictive little twisty turny tale of kidnap and torture during the season of goodwill. WAY too much fun and glitter in Christmas for my taste, I like a little bit of the dark side and Tammy Cohen has given us a perfect way to offset all the bright lights and Coca Cola adverts.

When Jessica Gould meets the charming Dominic Lacey whilst out Christmas shopping she impulsively agrees to go home with him for a drink. Once there however, it becomes clear that he intends for her to stay and she ends up stuck in a nightmare from which she fears she will not escape..

This is fairly fast paced, often horrific, but with such great characters (Dominic is scarily brilliant) that you can cope with the trauma, it is a tale of two halves. The first half deals with Jessica’s ordeal which is at turns grimly ironic and at others painfully descriptive, often causing a shiver – for the whole of that portion of the journey I was transfixed. The second half reveals a deeper insight into Jessica, and thats when you REALLY start turning those pages desperate to know what the final outcome will be.

Two extremely fascinating and well drawn characters here, a kind of clash of the psychological titans, neither of them honestly likeable (well if you LIKE Dominic I’m worried for you but he is compelling all the same) where neither one is clear cut and both have separate yet very damaging issues. It makes it a tour de force of a read in that you really do not know what is coming next and Ms Cohen manages to get you looking one way when really you should have been paying attention elsewhere – intelligent plotting and brilliantly sparkling prose. Perfect for Christmas.

Overall a great read especially if you’ve had enough of rainbows and kittens, this one will draw you in and spit you out later thanking everyone that all you have to worry about this Christmas is timing cooking of the Christmas dinner right – something incidentally I’ve never yet managed to achieve!

3 Responses to Dying For Christmas with Tammy Cohen