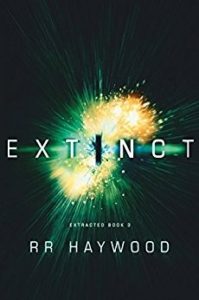 We need Malc and Kon back,’ Safa says, her tone already growing firmer in readiness for the battle.

‘And then what?’ Miri asks.

‘And then what what?’ Safa snaps.

Ben groans, Harry sighs and lowers the plunger before rubbing a hand through his beard. Emily leans back against the sink.

‘Safa,’ Ben says slowly and very carefully. ‘We’ve been through this lots of times . . . Lots and lots of times.’

‘We take M and K away from that situation, then the British never track the device to Cavendish Manor and we never do the things we did to extract Bertie and Ria . . . and Tango Two,’ Miri says.

‘I don’t believe it,’ Safa says stubbornly. ‘Roland said you can’t unknow something . . . He said that… So we go get Malc and Kon and Emily will still be here.’

‘And what if Tango Two ceases to be here?’ Miri asks.

‘It doesn’t matter,’ Safa retorts. ‘You two overthink everything and we haven’t even checked yet if it worked and if the world still blows up in twenty-one one one . . .’

‘The bunker is falling apart,’ Safa says, her voice dropping a notch, ‘but more than that . . . Malc and Kon are mates and we can’t just leave them dead. Ben came back for me and Harry . . . Didn’t that mess the timeline up? And if it did, we fixed it . . . same as we’ll do if getting Malc and Kon messes anything up.’

A moment’s worth of pause in reflection at the new angle being worked by Safa in the ever-continuing debate, either that or the tired- ness from the assault on Cavendish Manor and the multiple incursions into governmental war rooms just a few days ago are taking their toll.

Ria killed her own mother and currently lies sedated in her bed with a gunshot wound to her stomach. The hot water has stopped working and half the shutters in the bunker are either jammed shut or jammed open. The filtration system on the back door is whirring with a noise it shouldn’t be making. The electrics are flickering, the lights fading, doors squeaking and mould growing in the corners of rooms from the lack of sunlight and ventilation.

They killed scores of people during a sustained, prolonged and exhausting day of days that stretched them physically and mentally. They knew what they were going in for. It was a mission, a job, a thing that had to be done, and their faces and bodies still show the bruises, cuts and wounds. They can process and deal with all of that. They can spend long hours on Bertie’s island under the Aegean sun and swim in the warm waters of a pure unpolluted Mediterranean Sea. They can decompress and let the raw, brutal energy wane and recover. They can heal and go forward to the year 2111 to see if it’s still apocalyptic and if it is then they will fix it, but there is a line, and blocked toilets cross that line.

‘Harry’s a big man,’ Safa says, breaking the silence. ‘What’s that got to do with anything?’ Ben asks.

‘Oh,’ Ben says mildly as Harry tuts in admonishment at the crass mention of his daily motions.

‘I’m going for a wee outside,’ Emily says, but stays leaning against the sink, staring at the toilet and the still water an inch below the rim. ‘Where does it go?’

‘The waste. Where does it go?’ Emily asks again. ‘Where does the waste go?’ Safa asks Ben.

‘Why you asking me?’

‘I’m definitely going for a wee,’ Emily says, moving towards the door.

‘Shit,’ Ben says with a sudden wince. ‘Malc and Kon wouldn’t have risked raw sewage going outside . . . Must be a tank somewhere that we’ve never emptied.’

‘We’ve been here months,’ Safa says, screwing her face up.

‘Miri,’ Ben says, looking across to the older woman edging aside to let Emily pass. ‘We really need Malc and Kon back . . .’

Emily snorts a laugh, walking out into the corridor and down towards the doors at the end with a big yawn and a stretch of her arms over her head that makes the yawn sound gargled and strained. Moisture in her eyes that she blinks away. Her muscles are still sore from two days ago. A general feeling of fatigue and a few painful points from the bashes and bumps. She pushes through the double doors into the main room, flooded with natural light, and ducks as she walks to see through the window at what the weather is like outside.

A blue light flickers behind her, instantly forming a square doorway of shimmering iridescence and a man running through it whose voice comes to hearing mid-scream.

She spins with years of practice drilled into her core and her eyes hardening to read the threat. The man looks terrified. His face bathed in sweat, but his eyes fixed on her.

He runs deeper into the room, veering away from the portal with a glance behind as a second figure comes through with a snarl etched on his face. Blond hair, square jaw, blue eyes, grey clothing and a black pistol gripped in his hand that lifts to aim at the first man.

Everything on instinct. Everything on gut reaction. Emily snatches a plate from the big table and sends it flying at the man holding the pistol. He fires as the plate smashes into his face, knocking him back, the boom of the gun so loud and sharp in the confined space.

‘Get him, Emily!’ the first man yelps, diving for cover.

She grabs another plate and throws it hard, then launches across the room. She knows neither of the men, but the first is unarmed, terrified and shouting her name. The second is angry, uniformed and holding a gun. The second plate hits his elbow as he plucks another shot. With a shout, he tries to aim at Emily, but she’s closed the distance and first

feints left then goes right and low while kicking out with a leg sweep designed to take him down.

His reactions are fast and he almost jumps the kick, but tangles at the last second and starts to topple while plucking the trigger. He twists as he drops with an obvious intent to slam his body weight into her. She rolls to the side and kicks up to drive the heel of her naked foot into his groin with an explosive impact that sags him mid-fall. He slumps down with a yelp and tears in his eyes, but still he tries to aim and fire. She vaults up and slams that same heel into his face, snapping his head over, then drops to grab the hand holding the gun to ensure the aim is away from her.

‘CONTACT! CONTACT!’ She bellows the words, knowing the shots will already be bringing the others towards her. fte man fights her grip, suddenly lunging to sink his teeth into the back of her hand while scrabbling to pull a dagger from a sheath on his belt. He slashes out wildly, scoring the blade across her arm. She twists and yanks to free the pistol from his grip as he stabs up with the knife. No time to move away. No time to do anything other than point and fire. She sends two rounds into his chest, killing him instantly.

‘Oh my god . . . thank you, thank you . . .’ fte first man runs to her side, his face still frantic with fear and worry. ‘Emily, thank you . . . you’re a bloody lifesaver.’ He leans in fast to kiss her cheek with an action so natural and unexpected she doesn’t even think to shoot him. ‘I hate this bloody job . . . I’m Malc, by the way . . .’ he yells as he runs through the portal that shuts down just as Safa bursts into the room.

‘I saw it,’ Safa says quickly.

‘Two?’ Miri asks, seeing one body on the floor.

‘Malc?’ Ben asks as the others snap heads over to stare at Emily. ‘He kissed my cheek and said he hates this bloody job,’ Emily says. ‘Malc?’ Safa asks. ‘Malcolm kissed you?’

‘I saw the portal go off,’ Safa says, clocking the way Ben and Miri are staring at Emily.

‘He said Malc,’ Emily says. ‘Why are you looking at me like that?’ ‘Safa, did you see him?’ Ben asks while Miri looks on with a growing frown.

‘No, I just saw the portal going off as I came in.’

‘Couldn’t have been Malc,’ Ben says.

‘If Malcolm is alive to run in here, then he doesn’t die in Berlin,’ Ben says. ‘Which means they don’t track us to Cavendish Manor, which means your team don’t meet us and you don’t end up here—’

‘What?’ Emily snaps, finally looking down to take in the details. ‘A Nazi. You shot a Nazi.’

‘What on earth?’ Doctor Watson blurts, rushing into the room while pulling his trousers up. ‘Are we being attacked? I heard shots and— Good lord!’ he says, coming to a sudden stop on sight of the body. ‘Is that a dead Nazi?’

Extinct, the third in the bestselling Extracted series by R. R. Haywood is published by 47North on 24th May.

The end of the world has been avoided—for now. With Miri and her team of extracted heroes still on the run, Mother, the disgraced former head of the British Secret Service, has other ideas…

While Mother retreats to her bunker to plot her next move, Miri, Ben, Safa and Harry travel far into the future to ensure that they have prevented the apocalypse. But what they find just doesn’t make sense.

London in 2111 is on the brink of annihilation. What’s more, the timelines have been twisted. Folded in on each other. It’s hard to keep track of who is where. Or, more accurately, who is when.

The clock is ticking for them all. With nothing left to lose but life itself, our heroes must stop Mother—or die trying.

You can purchase Extinct HERE 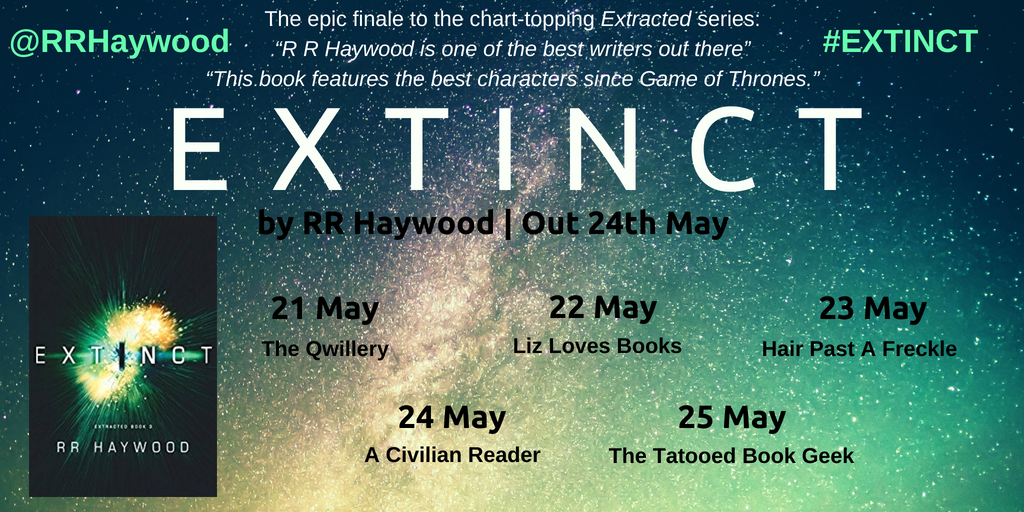 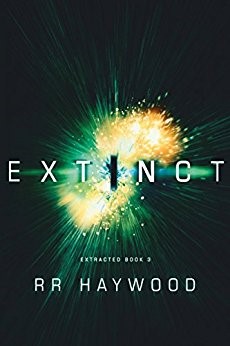