Today I have a guest post from G X Todd about the songs she listened to whilst writing the brilliant Hunted. Details on the book follow.

Five songs I listened to on loop whilst writing HUNTED

I always make playlists for the books I write, and they always differ in tone. DEFENDER’s had a very lonely, haunted vibe. I listened to a lot of atmospheric music by artists like She Keeps Bees and Emily Jane White, Peggy Sue and Gregory and the Hawk. I found any song in my music library that had even the slightest Western feel to it.

For HUNTED, I went for songs that had a wildness to them, an energy that drove the song’s momentum forward – and that fit with the chase narrative I was developing. But if I had to pick just one band that epitomised this playlist, it would be The Kills. I listened to all their stuff constantly while writing. Besides them, though, I’d say the selection had a heavy animal/insect theme: Vulture by Iggy Pop, Mosquito by Yeah Yeah Yeahs, Serpents by Sharon Van Etten are just a few examples. Here are my Top Five songs from the HUNTED playlist.

1. Alphabet Pony by The Kills

This one speaks for itself. The name of the song is what inspired me to call Addison’s bike Alphabet Pony. I’d have liked to have used the lyrics, too, but the cost constraints nearly always get in the way.

2. Joan of Arc by Arcade Fire

Originally, HUNTED was titled Martyr (to fit DEFENDER’s original title of Pilgrim, and with the third book to be named Saint). I had a whole theme going on, but no one liked my title ideas *insert sad face*. However, the ‘martyr’ element remained in the book, as did the tenuous link it has to Joan of Arc’s execution.

3. On Powdered Ground by Agnes Obel

This one reminds me of Posy. There’s a scene where he takes extra care not to step on any cracks while crossing some railway tracks. All I could think about while writing it was that Posy would remember that old saying “Step on a crack, break your mother’s back”, and even though his mother is long dead, he wouldn’t want to chance breaking the superstition. He is a naïve soul, and such nonsensical rules would be ingrained in him.

Oh my, I was obsessed with this song. There are a few instances in HUNTED where birds and their odd behaviour are described. I listened to Rooks countless times while writing those scenes. The lyrics and tune buried their way under my skin for more weeks than I’d like to admit.

5. The Times They Are A-Changin’ by Bob Dylan

This is the song that Voice sings to Lacey as she gazes up at the night sky, ruminating on the stars, with Alex and Addison sleeping nearby. It is their first chance to discuss how the world is changing and how the voices are growing louder within it. It’s quite an important moment for Lacey.

One man is driven by a Voice that isn’t his. It’s killing his sanity and wrestling with it over and over like a jackal with a bone. He has one goal.

To find the girl with a Voice like his own. She has no one to defend her now. The hunt is on.

But in an Inn by the sea, a boy with no tongue and no Voice gathers his warriors. Albus must find Lacey … before the Other does. And finish the work his sister, Ruby began.

Hunted is the second book in the highly acclaimed Voices series, where the battle between Good and Evil rages on. And on. 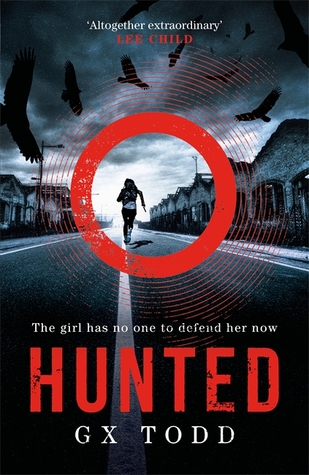