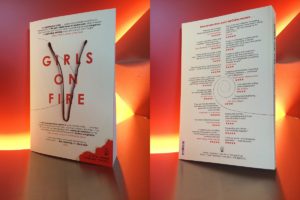 REALLY happy to have had the chance to interview Robin Wasserman all about the brilliant Girls on Fire – my review can be found HERE but if you havent read it yet don’t miss out – it is highly likely to be my book of the year! And thank  you to Joanne Spain and Chris Whitaker for the help with some of the questions, they are huge fans of this one too. Thanks most of all to Robin for taking the time to answer them…

First of all thank you so much because Girls on Fire was one of the most intense and brilliantly emotional novels I have ever read – perhaps you could tell us something about the original inspiration and what made you decide to write a novel for adults having been in the Young Adult market previously?

Well, first of all, thank you so much, because your incredible response to this book has been a joy to me ever sense you first posted about it. I don’t think I’ll ever truly wrap my head around the fact that there are people out there—people I’ve never even met—reading my work and then having actual opinions and feelings about it!

When I first started the novel, I wasn’t really thinking in terms of “adult” or “YA”—I just had these two characters in mind and a loose sense of their story. I knew I wanted to write a book about obsessive friendship between two teenage girls, the kind of relationships that’s fascinated me for a long time (probably since I was a teenage girl falling in platonic and obsessive love with a sequence of wild girl friends). I knew I wanted to set it in the early 90s, to write about both the dawn of the grunge era and the decline of the Satanic Panic. I knew that it would be an exploration of the joyous transformative power of adolescent friendship—and also a narrative of toxic desperation, of two girls flailing in a sea of love and betrayal, holding on so tight they’ll either both survive or both drown.

That’s where it started, and no one could be more surprised than me about where it ended up!

Dex and Lacey are our girls who are very much on fire – their relationship defines the whole story – would you liken yourself to either of them? Any of you in there?

I’m definitely more Dex than Lacey, and it’s fair to say I’m very Dex. Especially in some of her surface details—her musical taste and sartorial choices are both drawn from my own awkward teen years—but even more so in her confused timidity, her instinctive bowing to rules and authority, her impulse to play it safe, warring with inchoate desire to be brave and reckless and extraordinary. I was an extremely careful teenager, one who followed every rule and lived in terror of getting in trouble—but I also lived in terror of the mundane life, and I ended up attaching myself to a series of Lacey’s, girls who seemed to have more confidence than I did, almost as if being wild-adjacent could be a safe substitute for embodying any wildness myself.

So many books about teenagers now centre on social media, as if young people were never ‘bad’ until they could capture it on FB & Instagram. Setting it in the early 90s were you consciously taking social media out of it?

I agree that the narrative around adolescence now tends irrationally toward the alarmist, as if social media is the creator of all sins rather than simply its enabler. (That said, my teen years were miserable enough without the threat of Facebook bullying or Instagram humiliation, so I certainly understand the impulse of my fellow adults to look at the prospect in horror.) I’m a big believer that every generation of teenagers is basically working through the same set of problems, the same set of exciting and terrifying firsts—that technology just gives us new ways to express the same sentiments. That said, I do think social media offers a lot of juicy narrative opportunities, and setting the book in the 90s had less to do with excluding those than it did with using the 90s as a way of exploring some of the themes of the novel. This story is, in many ways, a narrative about authenticity, the question of whether it’s desirable, or even possible, the gap between person and persona, the ways we mold ourselves and the face we show to the world—and the early ‘90s were a time when the culture became obsessed with authenticity, and obsession that ultimately and inevitably became an act of its own. (This is the question at the heart of the Nirvana narrative, of course…what happens when the revolution succeeds so powerfully that it becomes the establishment? What does it mean to be grunge when you’re buying your flannel at the Gap?)

It was also, I’ll admit, a deep pleasure to write the story of an adolescence that, at least in culture and technology, mirrored my own. I’ve spent a long time writing about modern-day teenagers, trying to imagine what it might be like to grow up in the twenty-first century. It felt very different to be writing a book where instead of guessing, I could simply (or not so simply) remember.

If you had a chance to talk to Dex and Lacey before the events of the final chapters – what would you say?

Well, surely—and without spoilers—I’d say, Don’t do that thing you’re about to do!

I suppose I’d also give them the same useless advice adults have been giving teenagers since time immemorial: Think about this before you act on it. Don’t mistake this for life and death. Remember that high school isn’t forever.

And I imagine that they’d ignore me. Who could blame them?

Tell us about you in 5 easy soundbites.

* If you could meet and chat to one person (living or dead) who would it be My maternal grandfather. Or David Foster Wallace.

* If you could live anywhere in the world you would live…. This question is ALL I EVER THINK ABOUT. Any suggestions are welcome.

* One person in your real life who really inspires you… Since she’s now on my mind, thanks to the earlier question – Leslie Jamison, author of The Empathy Exams, who is, impossibly, even better in person than she is in print.

You can find out more here