It’s been five years since Carter Blake parted ways with top-secret government operation Winterlong. They brokered a deal at the time: he’d keep quiet about what they were doing, and in return he’d be left alone.

But news that one of Blake’s old allies, a man who agreed the same deal, is dead means only one thing – something has changed and Winterlong is coming for him.

Emma Faraday, newly appointed head of the secret unit, is determined to tie up loose ends. And Blake is a very loose end. He’s been evading them for years, but finally they’ve picked up his trace. Blake may be the best there is at tracking down people who don’t want to be found, but Winterlong taught him everything he knows. If there’s anyone who can find him – and kill him – it’s them.

It’s time for Carter Blake to up his game.

Oh my gosh I LOVE the Carter Blake thrillers, seriously, they are completely insanely addictive and so much fun. GREAT travel book is The Time to Kill, reading it as I did on two buses and a train trying to get home in the early hours of one morning. But I digress…

The real point about this and the previous Carter Blake books from Mason Cross is the sheer depth of character you get for what is, at its heart, a rollercoaster action filled thrill ride of the highest order. We care as readers, its not just about the action and there is always a beautifully placed back story that makes things even more intriguing and a differing  supporting cast that feeds into the whole thing perfectly. On which note I should say I really rather liked Scott, he was cool, loved the interaction between the pair – really great stuff.

In this case the indomitable and intelligently compelling Mr Blake is being hunted down by his old agency – he knows too many secrets, they are really a bit perturbed at this idea. Enter Emma Faraday (another pretty cool character who frankly, I had some sympathy for considering who she was after) who is as determined to “get her man” as he is to avoid such an eventuality. Cue lots of really heart stopping shenanigans. Fun see? You will blow through this one in record  time and come out the other side somewhat exhausted but most definitely very happy.

Carter Blake gets compared to Reacher an awful lot (he’s better)  – for me he is more Jack Bauer (he’s still better) but you should probably ignore both of those and just let this series be what it is.  A set of bloody brilliant thrillers with heart, more complex at the roots than they appear on the surface,  that honestly I hope go on for as long as the aforementioned Reacher has.  Longer. Its fine. Carter can kill people with the zimmer no problem.

To Purchase The Time to Kill clickety click right HERE. 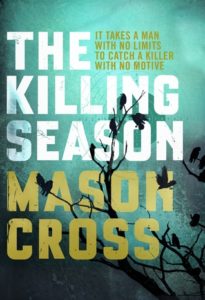 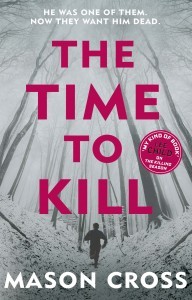