Hopelessly Devoted to Holden Finn…Well I am now… 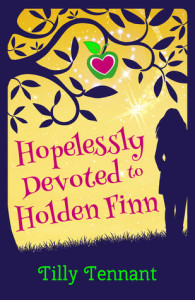 So I jumped on board the Tilly Tennant Blog  Tour Bus and got to read a pretty darn good book. And as its my job today to tell you WHY its pretty darn good, thats exactly what I’m going to do….

There’s only one man for Bonnie, and that’s Holden Finn.

The problem is that Holden Finn is a twenty-three-year-old pop megastar with his boy band, Every Which Way, and has no idea she exists. Not only that, but half the women in the world want to be Mrs Finn, including Bonnie’s teenage daughter, Paige. The real men in Bonnie’s life do nothing but let her down, but a man you can’t possibly have can never do that… right? She’s safe inside her fantasy bubble.

Then Paige wins a radio competition to meet Holden and the band, and Bonnie’s carefully-constructed world starts to unravel. She is about to find out that you should be very, very careful what you wish for …

So my usual way of going about things when it comes to Romantic Comedies or “chick lit”  is my fairly loose rule that I’m not that fond of reading them and if they don’t involve Hugh Grant or Richard Curtis I’m not that fond of watching them either…but  every so often fate (or one of those lovely Gosling Girls) tells me to get over myself and says – You are missing out. You will love this. LOVE this – and did I? Well yes I kind of did.

Celebrity crushes – we all have them (my current one VERY much involving a rather lovely young Sherlock actor) and the idea that sometimes fantasy can overtake reality and make us act rather obsessively is one that Ms Tennant has taken here and run with – with hilarious and heartwarming results. Thats not all this is about though – within the pages is a terrific look at relationships, especially that between mother and teenage daughter (and trust me I KNOW how that goes) along with some wry and ironic life outlook using some tremendously well drawn characters to push the story along.

I laughed a lot. Because of course imagining something and planning something hardly ever bears resemblance to what actually occurs when you think a dream might be coming true. I loved Bonnie and the best part of this story for me was her love for, and relationship with, Paige – a rather typical teenager when it comes to the word “selfish” – both extremely loveable characters who you will fall for. Hopelessly.

Throw into the mix one Superstar, the man you KNOW should actually be “the one” and a supporting cast of varied and extraordinarily likely characters and you have a fabulous, fun and tremendously addictive read that you will devour as if it were cake. Chocolate cake at that.

If you would like a Gosling Girls tour for your book then look no further! http://goslinggirlsbooktours.weebly.com/