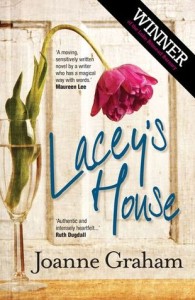 So a few weeks ago I read a wonderful novel, Lacey’s House, and it was emotional and compelling. I caught up with the author, Joanne Graham and asked her a few questions – here is what she had to say.

I believe Lacey’s character was inspired by your maternal grandmother. Can you tell us a little more about that?

My Grandmother Hilda was a fairly unique person. I remember that growing up everyone treated her gently when she came to visit, as though she may break. We spoke more softly around her, we didn’t criticise anything or play too vigorously. As I got older I learned about her depression when my mother was younger. That my mother had lived for a while with her own Grandmother when my Grandmother was struggling. I learned of her overwhelming grief following the deaths of two of her children and that ultimately she received electric shock treatment and was lobotomised as a result. When I first started researching the history of lobotomy in order to develop Lacey as a character, I was horrified by what I found and some of these horrors made their way into the book because I felt they were stories that needed telling. Although Lacey herself is a fictional character, some of her experiences were based in a reality that caused suffering and heartache for many people. The sad fact is that my Grandmother’s depression was treated with violence and cruelty and her story brought into sharp relief the tragic lack of understanding that existed around mental health issues; issues that, to an extent, still exist today. I wanted to create a character that was both sympathetic and likeable but also confused and struggling with reality.

You have created two very strong yet haunted female characters – did they evolve over the course of the writing or did you know pretty much everything in advance?

Perhaps a little of both.  I knew the sort of person I wanted Lacey to be and I knew that I wanted Rachel to carry her own wounding with strength as well as vulnerability. I had written a character analysis for both of them around these points. But their character’s really developed fully when I started weaving their stories together, as the story unfolded and they began reacting to one another in such a way as to create the personal bond that grows as the tale is told. I knew roughly how each of their stories would end before I had even begun to write the first draft but there were some things that happened that came as a bit of a surprise even to me, things I hadn’t thought of until I reached a certain point in the story.

How did it feel to win the 2012 Luke Bitmead Bursary and can you tell us a bit about it?

I’ll never forget how it felt to win the Luke Bitmead Bursary. It had never occurred to me that I would win. I knew that I could write but I have never been particularly confident in my own creative ability and so I was thrilled simply to have been shortlisted. I thought that I would go to London for the awards ceremony, meet some other writers, toast the winner and say congratulations and then go home again. It was a very surreal moment when I was announced as the winner and it is something that only really exists in a blur, I think that perhaps I went in to shock. In that moment my pipe dream career became a reality and I never thought that would ever be the case. It made me realise that you should always aim high and reach for your dreams because sometimes they do manifest in ways you never believed possible.

I love to read thrillers, anything that has me on the edge of my seat and turning the pages super fast and, equally, I love fantasy such as David Eddings’ Belgariad. I love tales told around mystical lands, magic, dragons and unicorns, for me that is the ultimate in escapism.

On the very rare occasions that I have a lazy Sunday, I find pyjama days utterly blissful. Snuggling up on the sofa with piles of snacks, a good film and a pile of cushions. Hair unbrushed, feet stuffed into fluffy socks and a chilled bottle of dry white wine as night falls. Sigh!

Ooh comfort food…so many to choose from. I would have to say that savoury would be something rich and spicy, I adore a spicy Chilli topped off with an obscene amount of sour cream and grated cheese and sweet would be some kind of fresh cream cake, preferably raspberry pavlova but anything creamy and cakey really, it’s all good!

Lacey is the village enigma. Considered to be a mad old lady, ignored by the locals and teased by the children she lives a solitary life. When Rachel moves in next door an unlikely bond forms between the pair…could it be that they have more in common than they realise?

What a pair of amazing female characters Joanne Graham has created here…both with great sadness in their past and worries about their future, watching the friendship develop over the course of this novel was a beautiful thing. Told chapter by chapter with either one or the other taking the lead, we slowly find out what has affected them so deeply and just why they are perfect companions – yes there is a mystery here, the mystery of Lacey and whether or not she can be trusted and just what she might have done but that is really kind of peripheral to the point for me. Its a story of friendship. How the most unlikely people can become the ones closest to your heart – a story of love, of loss and of trust both given and received.

Its a gentle tale but a compelling one. An interesting look at how a less than perfect childhood can affect your whole life – and yet both these ladies are strong in their own way, perhaps because of that. The writing style is easy and flowing with a clever eye to reality. The ups and downs of village life are apparent…and how one rumour can last a lifetime.

I loved it. Insightful and intriguing, heart wrenching and wonderful, keep the tissues handy when you are reading this one. I needed a box full. I can’t wait to see what this author gives us next.