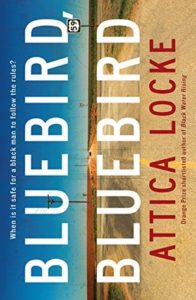 Southern fables usually go the other way around. A white woman is killed or harmed in some way, real or imagined, and then, like the moon follows the sun, a black man ends up dead.

But when it comes to law and order, East Texas plays by its own rules – a fact that Darren Mathews, a black Texas Ranger working the backwoods towns of Highway 59, knows all too well. Deeply ambivalent about his home state, he was the first in his family to get as far away from Texas as he could. Until duty called him home.

So when allegiance to his roots puts his job in jeopardy, he is drawn to a case in the small town of Lark, where two dead bodies washed up in the bayou. First a black lawyer from Chicago and then, three days later, a local white woman, and it’s stirred up a hornet’s nest of resentment. Darren must solve the crimes – and save himself in the process – before Lark’s long-simmering racial fault lines erupt.

Bluebird Bluebird is a novel of true excellence,  in concept, execution, character and incredibly talented writing. It pulls you in from the very first page, tells truth however uncomfortable, leaves you thinking about it for a good few hours afterwards and is one of those books that defies definition.

The plot is complex, intelligent and disturbingly realistic – and described much better than I could do justice to in other reviews (this being my favourite) so I’ll stick to talking about the impact Bluebird Bluebird (taken from the John Lee Hooker song) had on me  –  that was one of quiet contemplation about the realities of life outside my little bubble of work, school runs, reading and an easy, fairly privileged upbringing.

I’m not sure I can get over how vastly emotional the descriptive, beautiful tone of this novel, telling a sad and unfortunately all too authentic story, makes you feel. Darren Matthews, black Texas ranger, facing a range of problems even aside from the causal racism, is a uniquely qualified character to drive the narrative – his experiences, determination, flaws, all form the heart of the story, which is both thriller and thought provoking drama within one vivid and genuine setting.

Attica Locke is an engaging, perceptive writer who immerses you into the world she is talking about with beautifully captivating prose, an unsettling sense of feeling and sparking dialogue – it is yes an entertaining read but also an educational one – oh how far we think we have come as humans but oh so far do we still have to go…. 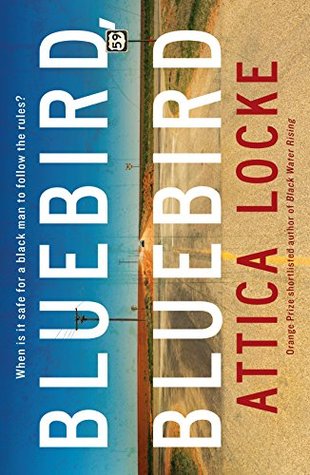