Latest Reads: Find You In The Dark Nathan Ripley 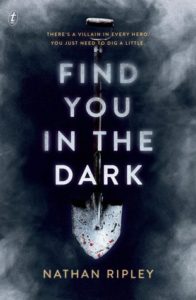 Martin Reese has a hobby: he digs up murder victims. He buys stolen police files on serial killers, and uses them to find and dig up missing bodies. Calls in the results anonymously, taunting the police for their failure to do their job.

Detective Sandra Whittal takes that a little personally. She’s suspicious of the mysterious caller, who she names the Finder. Maybe he’s the one leaving the bodies behind. If not, who’s to say he won’t start soon?

As Whittal begins to zero in on the Finder, Martin makes a shocking discovery. It seems someone—someone lethal—is very unhappy about the bodies he’s been digging up.

Hunted by a cop, hunted by a killer. To escape and keep his family safe, Martin may have to go deeper into the world of murder than he ever imagined.

Before I started reading this I’d heard mixed reports which is always intriguing – turns out I adored it and it was just the kind of story I love to get my head into. Not sure what that says about me…

ANYWAY, Martin spends his spare time looking through the cracks of various police investigations and very successfully digging up lost victims of serial killers. Sandra is a detective who is not as enamoured of this idea as some of her colleagues – rather than seeing him as a hero, she wonders about the psyche of a man who would do this sort of thing. Martin calls in his finds anonymously, but what he doesn’t know is that someone is watching..and Sandra is determined to track him down too..

There were several things that worked for me in this novel – first and foremost Martin himself, who tells his own story, allowing the reader to see inside his head. It was refreshing to see an exploration of a dark personality who has channelled that darkness into something that could be termed a public service – hence, I suppose, the comparison to Dexter, certainly both those characters are dangerously attractive, but this is a very different kettle of fish. So to speak.

Then we have Sandra, a divisive character, she is edgy and often annoyingly obtuse, yet you can see her side of things – wondering if this mysterious benefactor of closure for parents isn’t just working himself up to being the one who deprives said parents of their offspring in the first place. The yin yang between that and what you know of Martin makes for a fascinating reading experience, whose side you might take, whether you want Martin to “get away with it” or not…

The mystery elements are very well done but this one is all about the character study in many ways, descriptively it is dark and gorgeous and I loved how it ended – I’m wondering if we will get a sequel, I do hope so I’d love to see what happens next following the closure of this cat and mouse tale, I really would love to go back into Martin’s world again, I had a good if somewhat terrifying time there.

Purchase Find You In The Dark 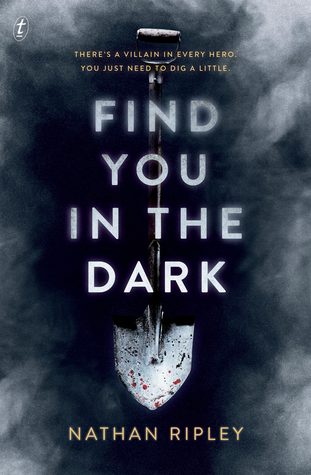