Latest Reads: Forget Me Not A M Taylor. 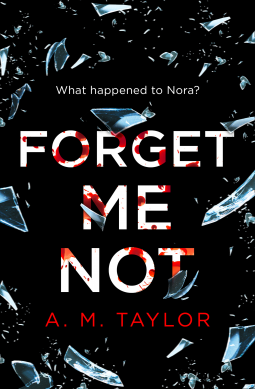 WHAT HAPPENED TO NORA?

When Maddie met Nora, their friendship felt as easy as breathing. And when Nora disappeared, all the air went with her. Without her best friend, Maddie’s life became impossible.

Ten years later, Nora is still missing and Maddie is still searching. People have been questioned. People have even been accused. But no one has managed to find Nora.

Then, in the same spot where Nora went missing, the murdered body of Nora’s little sister is found. Convinced this is no coincidence, Maddie resolves to uncover the killer and find Nora – dead or alive.

But will she be able to cope, when we learn what really happened to Nora…?

Within the explosion of psychological thrillers there are some that stand out for me as a reader and Forget Me Not was one of those. I sank into it and read it over two involved sittings.

The mystery elements are strong, it is not immediately obvious which keeps things beautifully unexpected so that was great but not entirely what drew me to this one.

A M Taylor writes about a town in turmoil and a girl who can’t move on. Maddie is a brilliantly drawn and highly sympathetic character, showing us throughout the narrative just how much the loss of her closest friend has changed her and affected her future. When another member of the same family is murdered the intricacies of that are thrown into the mix, the “whodunit ” fades more as we are given a stunning portrayal of grief and loss.

It was descriptively emotive, digging into the issues and exploring how knowledge or lack thereof can alter us. That plus a very real need to know what happened to Nora, ignited in the reader by Maddie’s trauma makes this a real page turner and a highly addictive read.

When psychological thrillers properly explore the psychology as this one does, it really adds an edge to proceedings and makes the story stand above the rest. I loved Forget Me Not because it worked on many levels above and beyond the natural central theme so therefore it comes highly recommended from me.

Terrific writing, intelligent plotting and memorable characters. All you need.

You can purchase Forget Me Not (Harper Impulse/Killer Reads) Here.