Eight months after confronting Pendulum, John Wallace is losing himself in a dangerous warzone in a misguided attempt at penance for what he has done. But an assassination attempt makes Wallace realise that he has once again been targeted for death. This time, Wallace is prepared and, tracking down his would-be assassin, he discovers a link to his nemesis, Pendulum.

The link is the missing piece of a puzzle that has tormented FBI Agent Christine Ash ever since they confronted Pendulum, but with no Bureau support she has been unable to progress her case. Wallace’s proof breaks it, but also exposes them both to terrible danger.

Confronted by a powerful, hidden enemy, Ash and Wallace must overcome impossible odds if they are to avert a dangerous challenge to the networked world that threatens to destroy our way of life.

Anyone that remembers how excitable and shrieky my good friend Kate of Bibliophile Book Club and I got over the first in this series, the gloriously entertaining Pendulum, will know that anticipation for the sequel, Freefall was high. As were expectations. No pressure then Mr Hamdy.

Freefall turned out to be a banging good read, like Pendulum but better, picking up from where that left off we find Wallace in a war zone in an attempt to make some random amends, Ash fighting the force of an employer that doesn’t believe her conspiracy claims and Bailey wondering where the heck his equilibrium went in the aftermath of being badly injured. Sadly for them, happily for the reader, supporters of Pendulum’s nefarious doings have more mayhem in store for our intrepid trio, the challenges that face them here are as likely to  pull them apart as they are to bring them closer together.

This trilogy, in its first two instances, are what I call intelligent thrillers. The action is all consuming and relentless but the story running through the thrill ride is thought provoking and multi-layered. Conspiracies abound and it is true that you can trust no-one, unexpected allies and sudden betrayals lurk around every corner. The writing is taut, exciting and incredibly hypnotic – the kind of beautifully written descriptive scenes and absolutely riveting character drama that meld together to produce a right old page turner. Any random worries I may have had that this book 2 would suffer “mid trilogy terrible syndrome” went out the window with the first chapter. (I didn’t actually throw the chapter out of the window, just the worries)

I’m a bit difficult to please  when it comes to my thriller reading to be honest. If all you have is all talk and no action I get irritated. If all you have is no talk and all action I get equally irritated. Yes I know but for me the best thriller writers seamlessly sew together heart stopping action sequences with deeply intriguing characters and a proper, well rounded plot that doesn’t expect insane suspension of disbelief levels – Adam Hamdy walks that line pitch perfectly, making both Pendulum and Freefall an accessible delightful read for crime and thriller fans of all levels.

I’m a fan. I know Kate loved this too as well. I suspect more Kermit the Frog gifs will be peppering out Twitter feeds nearer to the release of Freefall – and if you haven’t yet read Pendulum well you’ve got a bit of time. Because I’m nice like that. Due notice given thriller fans! Read in order is my advice. 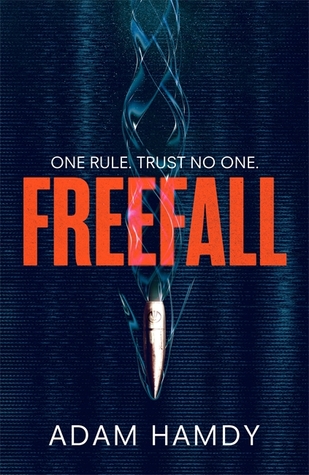