Latest Reads: The Fate of the Tearling Erika Johansen 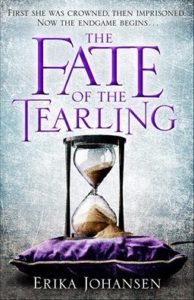 In less than a year, Kelsea Glynn has transformed from a gawky teenager into a powerful monarch.

As she has come into her own as the Queen of the Tearling, the headstrong, visionary leader has also transformed her realm. In her quest to end corruption and restore justice, she has made many enemies – including the evil Red Queen, her fiercest rival, who has set her armies against the Tear.

To protect her people from a devastating invasion, Kelsea did the unthinkable – she surrendered herself and her magical sapphires to her enemy, and named the Mace, the trusted head of her personal guards, Regent in her place. But the Mace will not rest until he and his men rescue their sovereign from her prison in Mortmesne.

Now the endgame begins and the fate of Queen Kelsea – and the Tearling itself – will finally be revealed . .

Well my word, this finale to the trilogy will cause some screaming waves of angst I’m sure – born out by the love hate relationship I see in the reviews for that final resolution.

I didn’t like it either. In fact I wasn’t fond of the ending from the point that Kelsea makes that decision at that time – obfuscated enough that people who have read it will know what I mean and I don’t have to spoil it for others – right up to the final lines.

But you have given it 5 stars I hear you cry. Yes. For two reasons – firstly, most of the novel was bang on brilliant for me, I hung off every word, I cried out at every action, I sobbed relatively often at stuff I didn’t know why I was sobbing about – and despite then feeling ambiguous towards how the author finished things off I allow that –  if you think back over all you have read – she set us up for exactly that finale from the moment we met Lily in book 2.

The fate of our beloved characters was never set in stone. The complex and eternally drifting story has had many beautiful layers. The history was imaginatively spread out before us within an ever changing landscape. Kelsea, the reluctant Queen, the girl who became a woman before our eyes – throughout the trilogy had one, seemingly inescapable fate. She will be the saviour of the Tearling no matter the personal cost.

Well is she? That is the question. And for those of us who have read that finale it’s a question that will probably keep us up on the odd night or two as we consider in full The Fate of the Tearling. To me that is worth those 5* and then a few more.

The writing is superb. It is really superb. The multiple character arc’s, the historical yin and the modern yang, the allegorical realities set into the moral choices of a Queen facing disaster on all sides. Good v Evil, no prisoner’s taken prose, incredibly emotionally resonant battles both of wit and sword – all the way through Erika Johansen has entertained, educated, consumed and engaged us. Sure, some will feel she fell at the final hurdle, but I don’t believe she did. Personal preferences aside on who ended up where and the ultimate cost to Kelsea, Mace, Row, The Fetch, oh all of them all of those lively, vivid and hugely divisive characters, in the end the story comes full circle. Kelsea fought. Whether she won or not well…

I loved it. All of it. Yes ok I suppose even that horror fueled intricately fought for final resolution. The Tearling Trilogy has been dazzling, mixing up the genre’s with an almost gleeful disregard for those booksellers (I’m sure it will end up in YA Fantasy but I’m not convinced it belongs there) and with a truly edgy and captivating writing style that sucks you in then spits you out a slightly different person.

I feel a bit giddy.

Purchase The Fate of the Tearling

Purchase The Invasion of the Tearling

Purchase The Queen of the Tearling 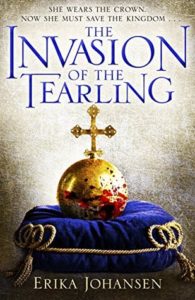 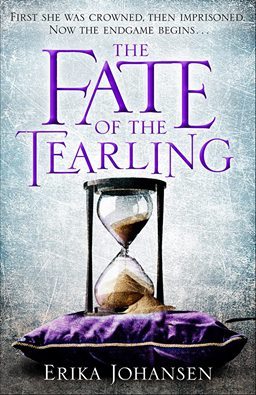