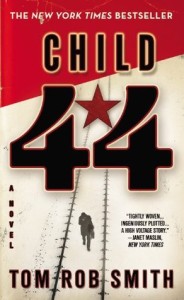 In Stalin’s Soviet Union, crime does not exist. But still millions live in fear. The mere suspicion of disloyalty to the State, the wrong word at the wrong time, can send an innocent person to his execution. Officer Leo Demidov, an idealistic war hero, believes he’s building a perfect society. But after witnessing the interrogation of an innocent man, his loyalty begins to waver, and when ordered to investigate his own wife, Raisa, Leo is forced to choose where his heart truly lies. Then the impossible happens. A murderer is on the loose, killing at will, and every belief Leo has ever held is shattered. Denounced by his enemies and exiled from home, with only Raisa by his side, he must risk everything to find a criminal that the State won’t admit even exists. On the run, Leo soon discovers the danger isn’t from the killer he is trying to catch, but from the country he is trying to protect.

I have been told over and over again by other book loving friends that this is a novel I must pick up. I prevaricated, put it off, thinking that it just would not be for me “Nooo” I said to them “Its set in Russia it will be all political and stuff and full of ambiguous moral judgements – I’m always bored because no-one can make that stuff interesting or authentic and the story always gets lost” Well there is being wrong and then there is being WRONG. I was the capitalised version…

Using his characters, their situations, their thoughts and feelings, Tom Rob Smith paints you a stark and discomforting picture of life in Stalin’s Soviet Union, pulling you in, making you sense and feel it…gives you an understanding of the mind set and then BAM! Shoots you straight into a tale that is so addictively brilliant that you will come round hours later, dazed and wondering what the heck happened…

I don’t think I’ve fallen as much in love with a character for years as I did with Leo Demidov. Morally ambiguous (yes I said it) but sure that what he does is absolutely right and justified, even so,  when we meet him at the start of this story things do niggle at him. IS that man they are chasing truly guilty? And even if that is the case is what he did deserving of death? Cleverly things happen around Leo that start to ingrain those doubts so when he is faced with denouncing his own wife, events really do start to overtake him.

Meanwhile children are dying. For each dead child there is an explanation and a handy guilty party – the similarities are glossed over, ignored and deleted, because of course there IS no crime of that nature in this place. It just doesnt happen. Right? Wrong says Leo and sets off to prove so – thereby putting all he holds dear in jeopardy and taking us, the reader, on a fast paced, utterly compelling race against time across the bleak landscapes and dangerous settings that make up the world he lives in.

The best part of this book for me was the relationship between Leo and Raisa, a beautifully drawn and surprisingly emotional at times glimpse into a marriage that may not be all it appears at first glance…wonderfully developed into a living breathing thing over the course of the novel, this is one excellent reason why I am overjoyed to discover that there are further books in the series.

An epic tale, a heartstopping conclusion and a fantastic plethora of twists and turns, this is one of the best novels I have ever read that could be described as “crime”. What I would call it is storytelling genius. Remember: “Trust but check. Check on those we trust.”  So trust ME…then check…

You can follow Tom on Twitter here: https://twitter.com/tomrobsmith and you can be sure that when I head back into Leo’s world with The Secret Speech and Agent 6  you will be hearing about it.

Coming Soon: The Farm. A standalone novel and I will not rest until I get my hands on it! 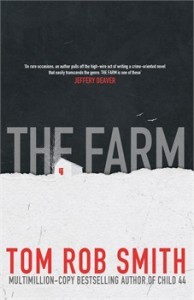 Until the moment he received a frantic call from his father, Daniel believed his parents were headed into a peaceful, well-deserved retirement. They had sold their home and business in London, and said “farewell to England” with a cheerful party where all their friends had gathered to wish them well on their great adventure: setting off to begin life anew on a remote, bucolic farm in rural Sweden.

But with that phone call, everything changes. Your mother’s not well, his father tells him. She’s been imagining things–terrible, terrible things. She’s had a psychotic breakdown, and has been committed to a mental hospital.

Daniel prepares to rush to Sweden, on the first available flight the next day. Before he can board the plane, his father contacts him again with even more frightening news: his mother has been released from the hospital, and he doesn’t know where she is.

Then, he hears from his mother:

I’m sure your father has spoken to you. Everything that man has told you is a lie. I’m not mad. I don’t need a doctor. I need the police. I’m about to board a flight to London. Meet me at Heathrow.

Caught between his parents, and unsure of who to believe or trust, Daniel becomes his mother’s unwilling judge and jury as she tells him an urgent tale of secrets, of lies, of a horrible crime and a conspiracy that implicates his own father.