Liz Currently Loves…Daughter of Smoke and Bone by Laini Taylor 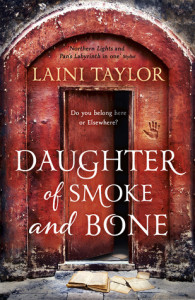 The note was on vellum, pierced by the talons of the almost-crow that delivered it. Karou read the message. ‘He never says please’, she sighed, but she gathered up her things.
When Brimstone called, she always came.”

In general, Karou has managed to keep her two lives in balance. On the one hand, she’s a seventeen-year-old art student in Prague; on the other, errand-girl to a monstrous creature who is the closest thing she has to family. Raised half in our world, half in ‘Elsewhere’, she has never understood Brimstone’s dark work – buying teeth from hunters and murderers – nor how she came into his keeping. She is a secret even to herself, plagued by the sensation that she isn’t whole.

Now the doors to Elsewhere are closing, and Karou must choose between the safety of her human life and the dangers of a war-ravaged world that may hold the answers she has always sought.

The third book in this trilogy recently came out and it seemed like every day someone was telling me off because I hadnt started yet. You will LOVE it I was told. So when I found myself with a spare bit of book budget, I thought, heck why not? And “Someone” was right because I DID love it. There is an awful lot to love.

I’m a huge fan of YA trilogies when they are done well – and of all the many I’ve read this is perhaps the Book One that has captured my imagination the most. An utterly magical and brilliantly written piece of world building, haunting and evocative prose with some of the best characters you are likely to meet in a fantasy book and an absolutely addictive and compelling story at the heart of it, makes this one of the reads of the year so far for me.

For me in novels of this nature, where the world within is not our own, its often the characters that are key to capturing my heart. Its all very well writing a magnificent fantasy world (which Laini Taylor has done here) but if you put people in it that are flat as a pancake it doesnt really matter how intriguing the world they inhabit is. Anyone who has read my “Book of the Year” from last year, Red Rising, will understand that, Darrow being an amazingly easy character to love. Katniss IS The Hunger Games. Without Mark Watney “The Martian” would have been as boring as can be. And here we have Karou. She pretty much sparkles with life and immediately and easily draws you into her world. She’s not the only one though – Brimstone is enigmatic and enthralling, Karou’s human friends and acquaintances are all either marvellously funny and loyal or beautifully annoying and as we get further in there is only more to come.

The mythology is fabulous. Absolutely endearing, the whole thing. As we learn more about Karou and her other life, as that other life starts to intrude upon the real world and as things go horribly wrong you will be engrossed, captivated and enchanted the whole of the journey. The basic premise is not unique but Laini Taylor has taken an idea and has brought new life to it in an elegant and exquisite way. I am in awe.

I came to the end and was bereft. As far as book hangovers go that was a doozy…the rest of the day was spent in a daze of “what do I do now?”. Bewitching. THIS is why I read.

I cannot WAIT to read the next two books in the series – I would be doing it now but sadly  I believe it is frowned upon to buy books rather than feed your children. Very soon though. Laini Taylor and Stephen King. Thats my plan for the month of June….