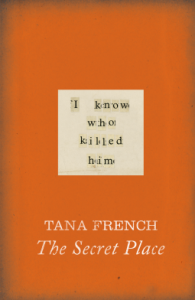 Thank you to the author and publisher for the advance reading copy via netgalley.

The photo on the card shows a boy who was found murdered, a year ago, on the grounds of a girls’ boarding school in the leafy suburbs of Dublin. The caption says, I KNOW WHO KILLED HIM.
Detective Stephen Moran has been waiting for his chance to get a foot in the door of Dublin’s Murder Squad—and one morning, sixteen-year-old Holly Mackey brings him this photo. The Secret Place, a board where the girls at St. Kilda’s School can pin up their secrets anonymously, is normally a mishmash of gossip and covert cruelty, but today someone has used it to reignite the stalled investigation into the murder of handsome, popular Chris Harper. Stephen joins forces with the abrasive Detective Antoinette Conway to find out who and why.

Firstly I should apologise to all Tana French fans who now have a bit of a wait for this one, its possible I should have delayed a little before reading and reviewing it, but really would you have waited? Nobody who has ever read anything by this author would have waited even a second…impossible. If you get the chance to read novels of this calibre early you don’t hesitate…

When it comes to writing emotional, evocative and magnificently character driven crime novels nobody does it better than Tana French. And I do mean nobody – as far as putting haunting magical words on the page goes, Ms French has the lead by quite a wide margin. The sheer beauty of the connections between one story and the next gives this series a unique power…There is no single main character, there are many, all interconnected, any one of them briefly mentioned in one novel can take front and centre in the next. You never know who you will meet up with again, at what time and in what way. Intelligently constructed and yet feeling as if they just simply happen, there is a creative talent to it that is as yet, for me, unrivalled in the world of Crime Fiction. Which as we know is a wide wide world…

This time we enter the closed, claustrophobic atmosphere of a girl’s boarding school – sometime ago a handsome and popular boy from the opposite school was found murdered in the grounds – after a flurry of activity the case went cold and it seems as if his killer will never be found. Enter Holly Mackay (who you may remember featuring in another story when she was younger) bringing a new clue to the attention of Stephen Moran, a police officer she knows. Stuck in Cold Cases, Stephen determines to get involved with the murder squad, and this may well be his way in. What follows is a tense and massively addictive story, where time is of the essence if a murderer is to be unmasked. Using a taut stretch of time within the school in present time and flashbacks to the past, Ms French weaves her web around you once again and trust me you will be trapped within it.

Relationships. Always so well drawn in this world have, if possible, achieved an even greater depth here.  The two groups of friends are stunningly well imagined – as the author unravels the sheer unknoweable quality of the bond and rapport that teenage girls develop and then often lose, this was absolutely fascinating. It took me back to the friendships of my youth, that utter surety that nothing will ever part you and you will live in each others pockets for eternity. And those moments where the cracks appear…life after all moves on and people change. When you start keeping secrets, even from each other, the centre cannot hold, and this is very much at the heart of this story. The Secret Place has many meanings…which one will be yours you will have to discover for yourself.

There isnt really very much else I can say. I could wax lyrical over the sheer genius of how things unravel, but that would give too much away. I will however say that I was one very happy reader at the reappearance of Frank Mackay – a character I adore with head and heart. And as I read the previous novels before I was a reviewer I would say that its the perfect excuse to re-read the lot and that is exactly what I intend to do. So if you have yet to discover the absolute inventiveness and enchantment of this novelist watch this space…

Brilliant doesnt cover it. Nothing does. Its unlike me to be lost for words….but I am.