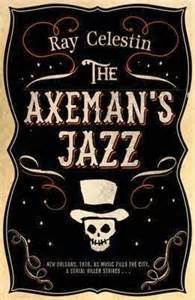 One of my favourite books of the year so far, The Axemans Jazz was a wonderful tale set in New Orleans and with some amazing characters at its heart. I was lucky enough to get to ask the author a few questions – here is what he had to say.

How did you first come across the story of the original AxeMan?

As bizarre as it sounds, through scouring the internet looking for serial killers. I was working on another historical crime story based on the case of The Cleveland Torso Murderer, but unfortunately that idea fell through when I found out there was a competing project in the works. I was little upset because I’d done a fair bit of research, but I had caught the bug for writing about a serial killer from the past, so I went online and started looking for a new case to base my idea on. There are lots of true crime websites that list serial killers from around the world. I read about the Axeman on one of them and it seemed like a really interesting case, partly because the case went unsolved, but also because New Orleans at the time seemed so fascinating. The more I read about the place, the more I wanted to write about it, and the Axeman seemed like the perfect entry point for that.

Can you tell us a little about the inspiration for fictional elements of the story? Including why Louis Armstrong…

Most of the fictional elements came from trying to explain why the murders happened. No-one was ever caught, so I had to come up with a plausible reason to link all the killings together. Once I’d figured that out (with the help of a friend), it became a case of making the most of the setting. There was so much going on in New Orleans at the time – the birth of jazz, the birth of the mafia, the birth of prohibition, the end of the war, as well as the murders – I didn’t think I could have just one hero to explore all the layers, so I came up with three different heroes to each look into a different layer. It kind of made sense to have Louis Armstrong in the bits of the book that dealt with the jazz scene as he is the person who was in the city at the time that most readers would be familiar with. Also, I liked the idea of having an 18-year old Louis in the book, because I guess most people think of him when he was in middle-age and later life. There were other sides to him that are explored in the book that may be a surprise to some readers.

Yes, Ida’s my favourite character. There’s this idea that when writers create the heroes of their stories, those characters are stand-ins for the writer, and that’s certainly the case with Ida – we’re both Sherlock Holmes fans, both read way too many books, and are both on the whole quite quiet. Aside from Ida, I also like Riley, the journalist character.

Sure. I’ve just started work on the sequel, which is set in Chicago in the roaring 20s. Ida and Michael are in it, as is Louis, who was working in one of Al Capone’s nightclubs at the time, so the infamous gangster also makes an appearance. There are some other new characters too, and an intriguing case to solve. Aside from that I’m working on some film scripts and a few book ideas – including a Victorian ghost story which is based on a real-life story.

Best novel you have read lately.

I haven’t actually finished it yet, but I’m currently reading Jesse Burton’s The Miniaturist, which is excellent and incredibly well written. I also just finished re-reading Charles Dickens’ Bleak House. It’s the first time I’ve read it since I was at school, and I really enjoyed it second time around as the massively complicated plot actually made sense this time.

If you could live anywhere in the world…

A book character you would love to meet in real life.

Either Gandalf, for the fireworks, or maybe Sherlock Holmes, if I could get to investigate a case with him.

New Orleans, 1919. As a dark serial killer – The Axeman – stalks the city, three individuals set out to unmask him…

So. This year is going to be a GREAT year for debut novels and this right here is going to be right up there with the best of them. Why? Well you don’t find many books as well written as this one for a start – magnificent prose, flowing like a dream, hooking you into the ambience and sometimes horrific beauty of  the New Orleans of the era, then shoving in there with you a killer, several “good” guys, one good gal and, well, Louis Armstrong. For pure escapism it doesnt come much better than this.

The Axeman was a real killer, who between 1918 and 1919 killed six people in New Orleans. He was never caught. He wrote a letter, re-produced in its entirety in the novel – and from this true tale, Mr Celestin has woven a magical but perfectly rational absolutely possible piece of fiction. When you blend fact with pure storytelling as beautifully as this you deserve Kudos. So Kudos Mr Celestin…

What else to say without spoiling it – Its difficult. Apart from the aforementioned Mr Armstrong, we have Ida (Sherlock Holmes fan), Michael (I fell in love) Luca (I fell in love again, ok I’m fickle) all trying to track down a killer, a ghost, possibly a madman – and all this is set against the most magnificent backdrop of the musically minded, mob ruled, insane rollercoaster of a city also known as New Orleans.

I can’t even begin to put into words how the city comes to life under the inspiring penmanship of Mr Celestin – A character in and of itself you will want to live there whilst also running screaming in the other direction – but mostly you will want to live there. Even so, added to that we have a well drawn description of the inherent racism of the times, the different communities and mindsets of such and some wry and ironic observations on life in general. Put all the above together and you have an ambitious novel indeed. And absolutely addictive reading. It will get into your head – for a while you WILL live there.

Fans of Historical Fiction are going to go into a paroxsysm of joy over this one, and any reader of any kind who enjoys a good yarn will have a lot of fun. Appreciate the art folks. This is it right here.