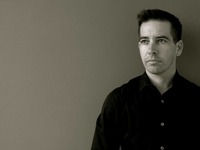 Today an introduction to Netwars: The Code with a guest post from author M Sean Coleman.

ABOUT M.SEAN COLEMAN: AUTHOR OF THE BUTTERFLY ATTACK AND THE CODE:

M. Sean Coleman was born in the UK and raised in South Africa. He started his career as a writer working for Douglas Adams on Hitchhikers Guide to the Galaxy Online. Now, he is a writer of film and television drama, a novelist, and an award-winning writer and producer of cross-platform drama and reality series. He holds a BA in Scriptwriting from Bournemouth, and an MA in Screenwriting from LCP. He wrote the script for The Butterfly Attack graphic novel app, and is the author of the complementary netwars series The Code.

I first learned about the developing Netwars project in March 2012, when I received an email from a producer friend of mine, based in Berlin. He told me that he had been hired to work on a prototype app for a graphic novel about cyber-warfare, and that the production company, Filmtank, was keen to find an English writer to create the script and story for the app. He had proposed that they contact me, and wanted to know if I was free and up for it. There was no question – I was definitely up for it.

The project was right up my street, not just because of the subject matter – which was something I was already fascinated by – but also because the whole project was being planned as a multi-faceted, cross-platform project. I had been working as a writer and producer of cross-platform projects for years, and the opportunity to tackle a project that merged fiction and non-fiction about a subject matter I was enthralled by was an exciting prospect.

Of course, I expressed a fierce interest in being able to pitch for the job, and was sent a whole deck of information and research into the subject matter, from which to begin my plotting.

I had all sorts of Bond-meets-Bourne ideas about the world I was going to create, and the drama that would ensue, but quickly realized that none of the ideas would really work in the context of the project: the producers had already stipulated that whatever I came up with needed to be realistic.

Very early on in my pitching process, the producers organised a two-day kick-off meeting, to take place in Berlin, with everybody who would be working on the project. Of course, the whole team was not employed by that point, but it was an excellent way of meeting the coders, producers, artists, organisers, creative leads and everybody else who would play a part, in the flesh.

Over those two days, we brainstormed more ideas off the back of the ones I had pitched and I took copious notes. We also worked out a timeline for delivery, so that I could go away and research and write without holding up the development process of the whole app.

At that stage, the project was set to be a TV Documentary and the Graphic Novel app series. Very shortly afterwards an interactive Web Documentary became part of the plan too.

During the development of the story, I spent a lot of time working with and referring to the ever-patient experts who had been consulting on the TV Documentary. It was essential that nothing I wrote contradicted anything that the documentary would say was impossible.

Getting this balance right was very hard. I wanted to tell an exciting and engaging story, but I needed to make it real, and at first it seemed that everything I came up with would just never happen in the real world. We wanted the graphic novel to feel like a new take on the comic book form, using everything the tablet format allowed us in terms of interactivity and depth of engagement with the story and characters. Also, because of the subject matter, we were determined to play with how much information the reader could unwittingly give the app, and at the same time, give them the feeling that they, too, were hacking the devices of the main characters. We wanted it to be pacey, edgy and have exciting, almost superhero-like characters and situations, but at the same time, we didn’t want the audience to feel they had to work too hard to get any hidden information. It was a difficult balance to get right, especially across three episodes.

At the same time as haranguing the poor cyber security experts every day, I was talking to hackers and politicians to try and make sure that I could get the right beats for the story, and still get away with some of my Bond-esque moments.

As a creative team we relied on Skype to communicate, and we would have weekly team meetings online from London, Berlin, Stuttgart and sometimes Spain. Holidays, timezones and other potential disruptions were no barrier. We only actually met in the flesh a couple of times, at the beginning and end of the project, everything else happened digitally. It was strangely appropriate.

In mid-2013, the publisher, Bastei Lübbe, joined the project as a partner to publish the Graphic Novel series and they liked the concept enough to see that it would make a good thriller novel as well.

I have no idea how hard the producers at Filmtank had to push to get me selected as the writer of the novel as well, but by mid-September I was asked to come up with a treatment for a serialized novel. It was a dream for me, as a writer, to be asked to write the novel. That stuff never happens, does it?

Fortunately, I had been researching the world of cyber warfare, cyber terrorism and cyber crime for over a year by that point for the graphic novel, and I had a lot of interesting stories to draw upon. The publisher made it clear from the outset that it would be a very tight deadline, since they wanted to tie the launch of the novel in with the launch of the graphic novel, and they wanted to do it simultaneously in English, German and Mandarin Chinese.

They weren’t joking about the deadline: I sent off the story summary on the 16th September and delivered the completed novel on the 16th December! It was the most rigorous writing deadline I have ever had, and there was not a spare moment for anything else in those three months, but I wouldn’t change anything if I had my time again. It was a fantastic experience – I just had to write, every day, for at least eight hours a day. No excuses.

The novel still sticks to the same rules as every other part of the project – it is all based in truth. In the end, I think the novel adds yet another dimension to the project as a whole, and hopefully will reach another audience again. Hopefully it will be a thrilling read, but will remind readers that we need to be more aware of our presence online and our over-reliance on the ease and convenience of technology in almost every part of our lives.

What I wanted to do was write a rollicking good page-turner of a crime thriller novel, with a chilling, real-life core. I defy anyone who reads it to say that none of the threats that feature in the novel could happen to them. 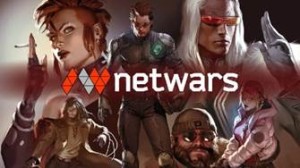 Netwars is a unique global cross-platform project created by leading German publisher Bastei Entertainment, following a group of hackers dealing with the impending threat of digital warfare between cyber terrorists and governments.

Published as six eBooks, the netwars project will also include three graphic novel apps and an interactive web documentary, with award-winning actor Nikolai Kinski (Aeon Flux, The Sinking of the Laconia, Yves St Laurent) playing the connecting character across all platforms. Each project can be followed as a standalone or as complementary to the other projects.

Just a few minutes after a nationwide blackout, life in the cities collapses. Famines, lootings and riots follow. It resembles a nuclear warfare movie scenario. But you don’t need a bomb to induce such a catastrophe… Just a computer is enough.

It’s 2017 and with new malwares created every day, Cyber Security is the No.1 top concern. By order of the European Defence Agency, elite security team Sixth Column are launching a hacking simulation to test their new security software. Led by former hacker Max Parsons, they are to conduct a secret cross-border cyberwar exercise, hitting the water supply, crippling power groups, and taking out transport networks in Norway. But then, there’s an explosion in Ranafoss power plant…

Someone else has taken over the exercise. Someone from Max’s past? What started as a simulation has become deadly serious. With lives and the country’s security at stake, the six skilled hackers need to find and fight this unseen enemy.

The first of three episodes of The Butterfly Attack will be released as graphic novel apps available on iOS, Google Play, Amazon and Samsung in English, German, Chinese, Portuguese and Spanish on 15th May 2014, price £1.99 per app.

THE EBOOKS: The Code

Don’t ask for forgiveness, nor pardon, nor grace.

Scott Mitchell is a reformed criminal hacker, by day working for a government agency to prevent cyber-crime. At night, he stalks the Deep Web undercover as Strider, anonymously executing criminals who have breached his personal Code. But after taking out Anthony Prince, the corrupt head of security firm PrinceSec with a nasty penchant for preteen girls, Mitchell realises that his target was part of a bigger, more dangerous group of cyber criminals than he imagined.

Links emerge between Prince and Black Flag – an organisation of highly skilled and extremely dangerous hackers. With national security threatened, lives at stake, and Mitchell’s undercover alias jeopardised, the race is on to stop Black Flag before it’s too late.

The Code is an eBook serial novel and will be released in six weekly instalments in English, German and Chinese on the 16th May 2014, price £1.49 per episode.

Imagine this: war is raging, and you’re right in the middle of it – without even knowing.

In this specially tailored interactive web documentary, meet the Salesman and learn about a cyberwar that has been going on for years.

Starring award-winning actor Nikolai Kinski, the five-part series explores the impending threat of cyber warfare. Blurring fact with fiction and featuring interviews from top security and hacking experts, it explains the background of the netwars setting and gives insights into past, present and future international hacker attacks. From the US-Israeli assault on Iran via Stuxnet in 2010; to today’s mass data collection by the NSA, and the multibillion dollar industry of digital security, the cyberwar is here.

A specially tailored interactive experience, the series makes one thing very clear – you are not in control.

Watch Episode 1: Out of CTRL

Watch Episode 3: Back Up Your Life

Watch Episode 5: The Industry of Fear 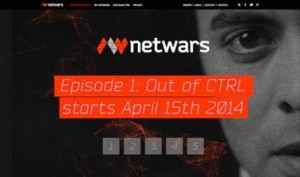 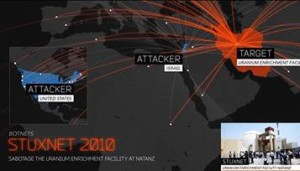