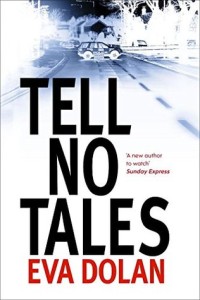 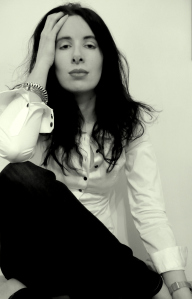 Tell No Tales is the second in the DS Ferreira and DI Zigic series, an intense and terrific crime novel – I caught up with Eva to ask her all about it.

The first novel “Long Way Home” set the scene and introduced us to DI Zigic and DS Ferreira – tell us a little about the inspiration behind the characters.

Before starting Long Way Home I’d thought a lot about the world I was going to be exploring and knew I’d be setting the book in a Hate Crimes department, so I wanted characters who’d be sympathetic to that and who were steeped in the community they’d be working with. Having detectives from migrant backgrounds was just the natural way to go.

Zigic and Ferreira aren’t quite a ‘chalk and cheese’ cop duo, they’re both conscientious and determined but in very different ways because I like a bit of a frisson between main characters, so while Zigic is a settled family man, sympathetic and logical and thoughtful, Ferreira is more gut-driven and combative, her experience is much closer to that of the victims and criminals they deal with, being a first generation Portuguese immigrant herself, and because of that she’s got a bit of a chip on her shoulder.

They’re huge fun to write and just now, finishing the third book in the series, I’m enjoying finding out more about them and seeing how they react under new pressures.

What made you decide to set the books in Peterborough specifically?

The storyline of Long Way Home led me to Peterborough. Once I knew I’d be writing about immigration I wanted a location which was small enough for an influx of migrant workers to have a pronounced effect and obvious reaction, but somewhere large enough to contain lots of stories if the series continued for awhile. Peterborough has seen several waves of economic migration during the last hundred years and as such has an interesting ethnic mix. It’s one of those post-industrial Midlands-ish cities with its fair share of deprivation and social challenges, good fodder for a crime writer as the series continues. It’s also on the edge of thousands of acres of bleak and beautiful fenland, great for chase scenes and dumping bodies in.

How did the plot for “Tell No Tales” start forming for you?

The storyline for Tell No Tales came out of unused research I did for Long Way Home, looking into the British far-right, its history and make-up and how it was now becoming worryingly mainstream thanks to a certain Euro-sceptic party and the medias obsession with its racist, sexist, homophobic members. I wanted to explore how the political arm of the movement related to the foot soldiers, the internal warfare they’re constantly locked in, and what would happen if you threw murder into the mix.

There are some important issues highlighted within the books – do you find its important to you to try and inform and influence as well as entertain?

A year is a long time to spend writing a book and for me there needs to be something  ‘bigger’ at stake that just telling a good story. I want to be moved by the subject matter, so tend to seek out issues which I believe are important, usually ones which make me angry or I feel are being overlooked elsewhere. Getting fired up like that helps create momentum and with Tell No Tales the mainstreaming of ultra-right ideology was very much in the news while I was writing, so every time I opened a paper or saw a bulletin there was some fresh annoyance to spur me on.

There’s nothing wrong with writing to entertain – all authors should strive to do that – but writing solely to entertain is not for me. Don’t know if I’ve ever managed to influence anyones thinking but if a reader comes away from my books feeling like they’ve seen a world that’s new to them then I’m happy.

Any writing habits? Must have coffee? Chocolate?

I am hugely superstitious, so I have to have my big, ugly writing cardigan on and my lovely Toast pyjamas, two cups of very strong coffee in my special writing mug, two roll-ups, and some Lindt dark chocolate for sugar infusions during long sessions. I’ve found lately that music is too distracting while I’m working but I need some kind of background noise so put on the BBC news channel for a low murmur and occasional inspiration. I usually prep my brain with a few hands of poker but it takes a lot of self control to close that table and start writing, especially when I’m winning!

The Road by Cormac McCarthy because it’s the most accessible of his books and I want everyone to get sucked into his dark and deeply twisted world.

3 people alive or dead you would love to have at a dinner party.

Mark Thomas, Nigel Farage and Shami Chakrabarti – I don’t hold with that convention of not talking politics or religion over dinner and I think they would make for a memorable evening.

The car that ploughs into the bus stop early one morning leaves a trail of death and destruction behind it.
DS Ferreira and DI Zigic are called in from the Peterborough Hate Crimes Unit to handle the investigation but with another major case on their hands, one with disturbing Neo-Nazi overtones, they are relieved when there seems to be an obvious suspect. But the case isn’t that simple and with tensions erupting in the town, leading to more violence, the media are soon hounding them for answers.  Ferreira believes that local politician Richard Shotton, head of a recently established right-wing party, must be involved somehow. Journalists have been quick to acclaim Shotton, with his Brazilian wife and RAF career, as a serious contender for a major political career, despite his extremist views, but is his party a cover for something far more dangerous?

Another gripping read from the pen of Eva Dolan, who’s first novel in this series, Long Way Home, gave a fresh take on Crime fiction and was terrific. The follow up “Tell No Tales” is, if anything, even better as now we know the characters and understand a little of what they are up against.

In this instalment a hit and run causes tensions to rise within the community and Ferreira and Zigic are under pressure to get a result before things explode. It is not that easy however as political shenanigans and extremist tendencies get in the way.

I love how the author paints a picture of a community here – troubled yes, but also rich in history and diversity – I was particularly taken with Sophia, who has a difficult life, often made worse by her own actions. The political landscape is extremely well drawn, echoing the issues we see in our society today and giving them a voice and an authentic background, it is endlessly fascinating and totally addictive.

Beautiful flowing prose and a distinct ability to get to the heart of the matter make this a top notch, brilliant crime read and definitely solidifies the author’s place on the list of those Crime writers who are only going to get better, classics in the making. I, for one, can’t wait to find out what is next for DS Ferreira, DI Zigic, their colleagues and the Peterborough community. 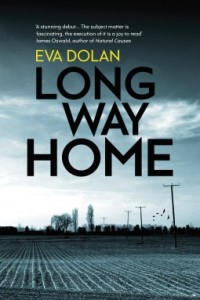