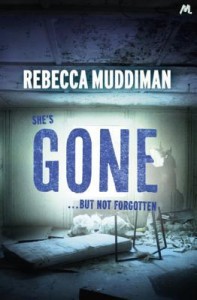 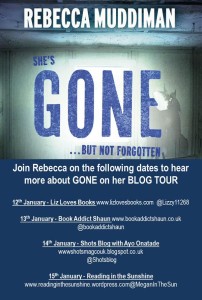 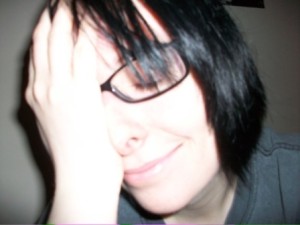 So as part of the Blog tour for the terrific crime novel “Gone”, in the spirit of my “Why We Write” occasional drop in features, Rebecca Muddiman kindly wrote a guest article all about her writing process.

I’m constantly searching for the perfect writing process and routine. I have a copy of Daily Rituals by Mason Currey next to my bed which outlines the habits of other writers and I do wonder about copying some of the greats in order to get the work done. Unfortunately, many of them include drinking large amounts of alcohol, often in the day, which I’m terrible at; or taking naps, which I’m also bad at, unless I’ve been drinking but then that’s your whole day gone. So, instead, I’ll just stick to what I know.

Most of my writing starts with a vague idea – maybe something I’ve read or seen on the news. Watching TV and films or listening to music sparks a lot of ideas too but often these ideas don’t fit with the kind of crime novels I write. Warning to my editor: I’ve just re-watched Twin Peaks so things could get a little weird in the next book.

Some ideas never get past the swirling around in my brain phase but those that do end up being scribbled on various scraps of paper until those bits of paper start to look like they could become an actual story.

With my first novel, Stolen, the plot came first and the characters were built around it. Even DI Gardner was just a bit part in the initial draft but over time became the star. And because he kept growing and his back story kept developing, when it came to writing Gone, the plot became informed by his character.

The next part of the process is often the most fun and the most frustrating as I try to piece everything together. I do this by writing down each plot point or scene on a little bit of paper and then spread them all over the floor. This way I can see more clearly where things are missing and also how best to structure the book. I shuffle the pieces around until I’m happy and then write up a vague chapter by chapter outline. I use this to guide me once I start writing but often I’ll go off on tangents anyway.

I try to be at my desk by about 8am and work until it’s dog walking time. After lunch I get back to it and work some more until I’m either hungry again or my brain seizes up. I always work from home, rarely venturing out to write somewhere new. Our house is nicknamed Murder Cottage as both me and my boyfriend both write crime novels. We thought about getting a plaque but wondered whether the postman would stop coming. Anyway, it’s really nice to work from home because you never know when you’re going to need a stiff drink or a nap.

250,000 people go missing in the UK every year. 91% of those reported to police are found within 48 hours. 99% of cases are solved within a year. And 1% stay gone. 11 years ago, troubled teenager Emma Thorley went missing. The police assumed she was a runaway. But now a body has been found in woods near Blyth. DI Michael Gardner knows he didn’t take Emma’s disappearance seriously enough back then, and is determined to make up for it now. But when he and DS Nicola Freeman start to reinvestigate, they discover that nothing is as simple as it seems.

An extremely clever and addictive mystery story to be found here, another great crime novel and it kept me on my toes throughout. I have been lucky lately to find a lot of new crime novels, one of my favourite genres – this is a top notch addition to my must read authors list.

Some brilliantly drawn characters lead us along – the most fascinating of which is one Lucas Yates, someone who has a past with missing teen Emma Thorley – now presumed dead – and who was not that fond of her. Then we have DI Michael Gardner, a man haunted by his past when it comes to his present colleague relationships, with the sense that he did not do the search for Emma justice at the time of her disappearance. These two very different but equally compelling characters made this book for me – I was eager to find out the outcome for both.

The mystery element is beautifully imagined and very well constructed – as the story ebbs and flows there are some great twists and turns and Rebecca Muddiman has a great turn of phrase and descriptive prose that keeps you deep into the story throughout.

Overall then highly recommended for Crime Fiction fans, an excellent addition to my list of author favourites.