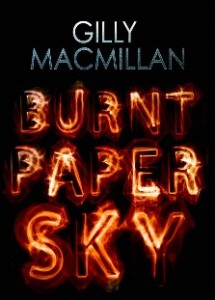 Today see’s the release of Gilly Macmillan’s brilliant novel Burnt Paper Sky – I am absolutely delighted to welcome Gilly to the blog to tell us a little about it. I’ve also persuaded her to come back another time so look out for that one in the future! Review to follow the interview – this comes highly recommended from me.

Tell us a little about the original inspiration for Burnt Paper Sky.

Burnt Paper Sky was inspired by my love for page-turning psychological thrillers, and especially those in the domestic noir genre. Before I started it I had recently read Linwood Barclay’s No Time for Goodbye, which had a brilliantly simple premise and a domestic setting that I really related to. It inspired me to try to think of what my worst nightmare would be, as a starting point for my book, and the answer came quickly and easily: for one of my children to be abducted and not to know what had happened to them. It’s just one of the most desperate situations imaginable and I knew it would give me lots of potential for interesting characters, a ticking clock as the investigation progressed, and the opportunity to explore all kinds of interesting themes and ideas.

The social media age and living life in the spotlight is a huge theme here, we all judge people caught up in these distressing events from the comfort of our sofa’s – do you think this hinders the police rather than helps?

I think social media can play a very useful role in spreading awareness about cases, or appealing for information, which can be extremely useful to police in some circumstances, especially missing persons. It can galvanise large numbers of people to help in physical searches too. Beyond that, however, I’m very dubious about its benefits in circumstances like these. On social media sites the judgements can become so extreme, so quickly – and this isn’t helped by traditional media reporting on the social media reaction – that it can seem as if a bit of a lynch mob mentality has developed, and that has to affect the behaviour of everybody involved in a case.

If families are being victimized before the investigation is underway, that can’t be good. And nor can it be good for there to be such a frenzy via traditional or social media, with all the demands for information and action that goes along with that, that police have to actively manage it when their efforts would be better concentrated on the investigation itself. And of course there have been extreme cases where use of social media has compromised investigations and also caused trials to collapse (to the point that there is new legislation that makes this unlawful). Having researched this in great detail, I believe we should all think very carefully before we wade in and express our opinions online in these cases, especially as so often we only know a fraction of the real story.

Did you have everything plotted from the start or did things change as you went?

Nothing was plotted! Though I’m not sure if I should admit to that! The only thing I had when I started the book was the first scene, the knowledge that I wanted Rachel (the mother of the missing child) as narrator, and a sense of what the ultimate fate of her son Ben would be. That was it. The rest evolved as I wrote, and was rewritten many times both before and after submission to publishers.

Which character was your favourite, if that is the right word – who came easily?

Rachel definitely came most easily. Her voice arrived fully formed right at the start and in fact one of the parts of the book that’s been tampered with least is her prologue and opening scenes in the woods. I so much wanted to explore her experience of her situation that although it was sometimes hard to be in her head, I never hesitated because her voice came easily and I felt as if the story of her experience needed to be told. Having said that, I do also have a huge soft spot for Jim Clemo. He wasn’t a narrator in the first draft, and it took me a long time to develop his character and to get the courage to write in a male voice and to be happy with that, but once I was in my stride I really enjoyed writing him too. He’s a character I’m very fond of.

When not writing what type of novels do you enjoy reading?

As I said above, I love a page-turner, but I’ll happily read any kind of novel.

I’ve been an obsessive reader since I was a child, and I don’t really stick to any genre. I’m glad I don’t because I think I would be missing out on so much if I did, and I think reading widely is very good for my writing. Lately, I’ve raced through historical fiction, comedy, crime and more traditionally literary books too. I read mostly contemporary fiction but not exclusively. A massive discovery this year has been Georges Simenon. For me, if a book turns pages, I don’t care what genre it’s in or when it was written, I just want to find out what happens next.

I submitted my second novel to my publisher in June. It’s another psychological thriller called Butterfly in the Dark and I’ve just finished work on the proofs. I’m really excited about this one as writing a second novel, for a deadline, has felt like a massive challenge over the last year, and this one has a complex plot and a cast of characters who both thrilled and unnerved me. ‘Butterfly in the Dark’ is set over a very short time frame, barely two days. There are several narrators and it’s extremely intense, and claustrophobic. Here’s the blurb from the publisher:

Several years ago, Zoe Maisey – child genius, musical sensation – caused the death of three teenagers. She served her time. And now she’s free. Her story begins with her giving the performance of her life. By midnight, her mother is dead. BUTTERFLY IN THE DARK is an intricate exploration into the mind of a teenager burdened by brilliance. It’s a story about the wrongs in our past not letting go and how hard we must fight for second chances.

Thanks SO much Gilly – and gosh can’t wait to read Butterfly in the Dark.

Rachel Jenner turned her back for a moment. Now her eight-year-old son Ben is missing.

But what really happened that fateful afternoon?

Caught between her personal tragedy and a public who have turned against her, there is nobody left who Rachel can trust. But can the nation trust Rachel?

The clock is ticking to find Ben alive.

WHOSE SIDE ARE YOU ON?

An absolutely brilliant page turner this, focusing very much on character rather than mystery (although the mystery element is also superb) as we delve into the heads, hearts and minds of a group of people caught up in a child abduction case.

When Rachel lets Ben out of her sight for a few moments, he disappears apparently into thin air. Following the ensuing police investigation and how it affects not only the family but the officers involved, this is an emotional rollercoaster of a read that utterly grips you from the very first page.

Rachel is an elegantly drawn character who is both sympathetic yet often incomprehensible – it is easy to understand why the general public turn on her. Gilly Macmillan has taken a story that could be straight out of the news and given us a fictional insight behind the scenes of such a traumatic event. It brought to mind a very obvious real life case which caught the public imagination, lets face it we’ve all done it, that little voyeuristic leaning. Seeing someone being interviewed on the news and thinking “ooh they look suspicious”. In “Burnt Paper Sky” you see it from all sides, from many angles and most of all get a real feel for how that can make an already stressful time that much worse.

Then we have Jim Clemo, in charge of the investigation, a man who we see in the aftermath as haunted and broken – as we look back over the details the reasons for this become apparent. It is beautifully constructed and has huge psychological depth. Jim I did sympathise with throughout, genuinely determined to find Ben at all costs, still his own personality traits often interfere with what might be logical. Authentic and totally believable, it was heart wrenching stuff.

Looking at the mystery element (what DID happen to Ben) this is woven into the plot seemlessly – whilst the characters and what they are going through are key, each little insight into them (not only our two main protagonists but the wider family and the other officers involved) gives another clue to a possible outcome, another step on the ladder to discovering what happened on that afternoon. Again realistically drawn, there is nothing here that is thrown in for the sake of it or to create red herrings, it is simply a good story that could easily be completely true.

Mostly this novel will have you questioning – the next time you see a breaking news story a little like this one (sadly I feel that this is bound to happen) you may look at things differently. After all if YOUR life was thrown under such a spotlight, where every nuance and every action was dissected and taken apart, how would you look to the outside world? We all have our secrets, we all make errors in judgement. If that one error led to a tragedy, could anyone really blame you more than you would blame yourself?

Whose Side are you on? Well Ben’s of course. But that won’t stop you going back and forth on the other players in the drama – guilty or innocent they will all get into your head and stay there. Brilliantly done.

Seek out the rest of the tour! 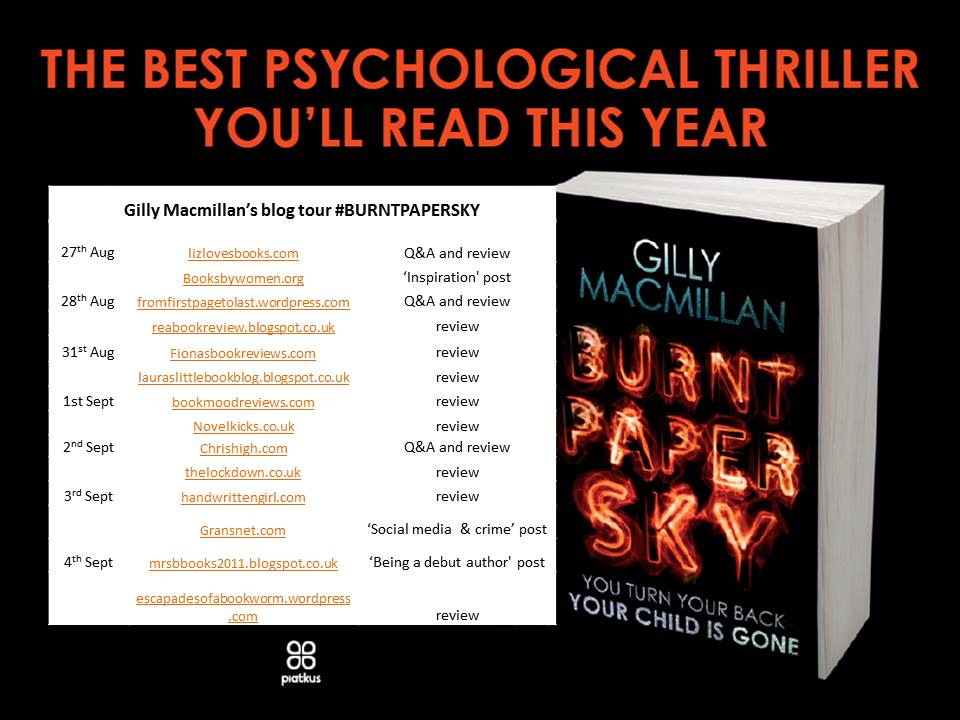