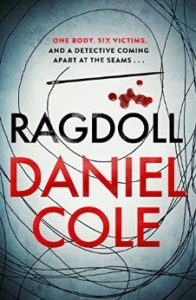 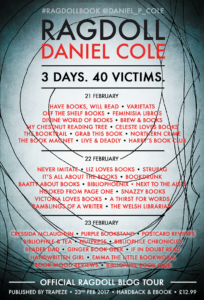 Happily a victim of Daniel Cole and Ragdoll today reposting my original review. Out tomorrow! Go get it if you just like to rock along with a book….This book is rocking.

One of those books that a lot of people are talking about and you go hmm. Can it really be that good? Well if you like your crime novels to be indecently clever, terribly addictive, with a twist of horror and a huge dose of dark humour then yep it really can be that good.

ANYWAY characters? Yep got some of those in here, some utterly fantastic ones, none of whom seem to follow your usual tropes or if they do they do so in irregular and unlikely fashion. With style. Wolfe well, you never really know what he is going to do. It makes it beautifully engaging. Taking a cue from a note from the author , I thought Wolfe was a bit Jack Bauer on acid with better occasional wisecracks. I fell a little in love. Emily Baxter his one time sidekick is  well, she just is. Then the whole police team around those two have their own little weather patterns and externally you have news people(including wife Andrea – oops I mean EX of course) and possible victims and what have you, all entirely fascinating. Even if some of them did make me want to hide under the bed never to emerge again.

The dialogue crackles, the plot is beautifully woven to keep you guessing, although I gave up guessing around the middle of the book and just went along for the ride. It was a topsy turvy joy of a read that never once let up  in quality or stimulation  and it was a rocking rollercoaster from start to finish.  With body parts. And blood. And death. And giggles. And Wolfe.

And WHAT an ending.

Ragdoll? Yep yep and yep. Is what I have to say. This time the hype for me was justified. Its just good fun people! Even if the subject matter is the stuff of nightmares. Oh and by the way, great take on human nature here. If you are thinking this is all popcorn no depth think again. Works on many levels. Many many levels. Can’t wait for more from Daniel Cole. 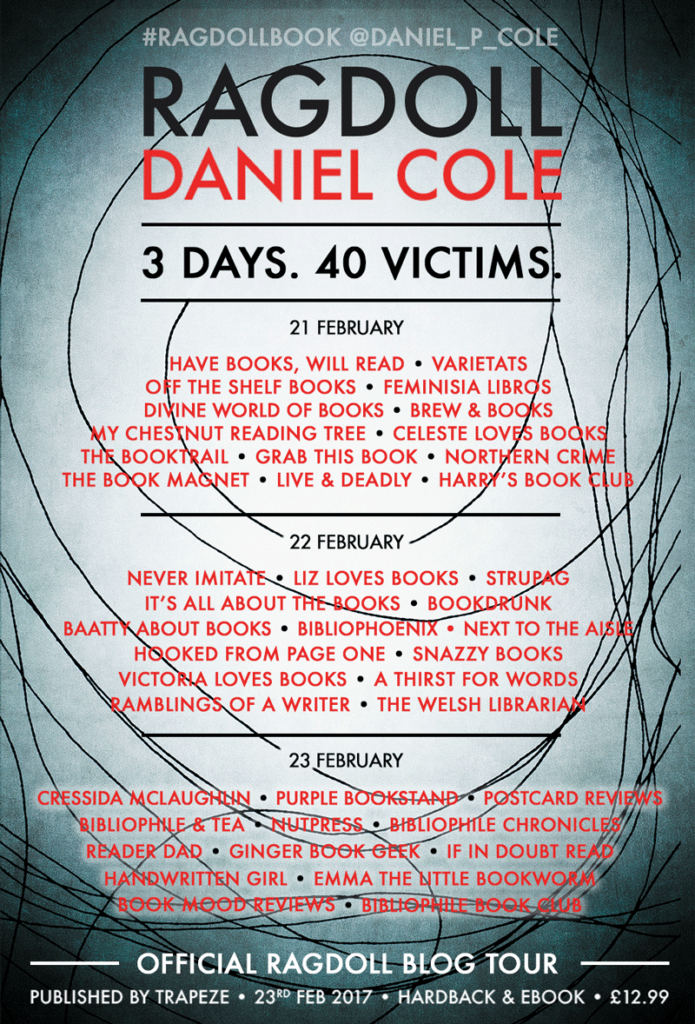