Ones to Watch in 2019: The Winter Sister Megan Collins. 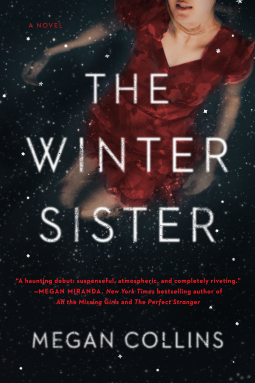 Sixteen years ago, Sylvie’s sister Persephone never came home. Out too late with the boyfriend she was forbidden to see, Persephone was missing for three days before her body was found—and years later, her murder remains unsolved.

In the present day, Sylvie returns home to care for her estranged mother, Annie, as she undergoes treatment for cancer. Prone to unexplained “Dark Days” even before Persephone’s death, Annie’s once-close bond with Sylvie dissolved in the weeks after their loss, making for an uncomfortable reunion all these years later. Worse, Persephone’s former boyfriend, Ben, is now a nurse at the cancer center where Annie is being treated. Sylvie’s always believed Ben was responsible for the murder—but she carries her own guilt about that night, guilt that traps her in the past while the world goes on around her.

As she navigates the complicated relationship with her mother, Sylvie begins to uncover the secrets that fill their house—and what really happened the night Persephone died. As it turns out, the truth really will set you free, once you can bear to look at it.

The Winter Sister is a mesmerizing portrayal of the complex bond between sisters, between mothers and daughters alike, and forces us to ask ourselves—how well do we really know the people we love most?

The Winter Sister is a beautifully written family drama and psychological thriller that has a cast of highly intriguing characters, an emotionally resonant storyline and an edgy literary vibe that really involves the reader in this intricate familial web.

Sylvie returns home years after her Sister’s murder, to look after her Mother who is battling cancer. The relationship between these two is strained and unpredictable, both are hiding things surrounding the killing of Persephone, the once loving mother daughter bond dissolved. As the story unfolds, layer upon layer of secrets fall away until Sylvie is left with the stark, horrific truth.

This was a complex character study, extraordinarily fascinating especially in the very different perceptions of the Sisters when it comes to their Mother. Annie is hugely secretive and obviously damaged, Sylvie in her childhood memories gets that across even as she struggles to understand it herself.

The mystery element is very much secondary to the exploration of parent/child relationships and the events that can form a personality.  Who killed Persephone is all tied up in the forming of bonds, the choices we make and the different ways we define love.

It was excellent. Disturbing, intelligent and hugely addictive, with a strong emotional sense, The Winter Sister works on many levels.

You can purchase The Winter Sister (Atria) Here.