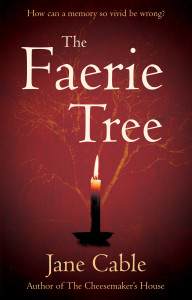 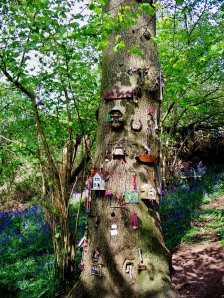 Today I am very pleased to welcome Jane Cable to the blog – celebrating her new novel “The Faerie Tree”. Here she talks about keeping Fiction real.

I tried to remember the first time I’d been here and to see the tree through Izzie’s eyes. The oak stood on a rise just above the path; not too tall or wide but graceful and straight, its trunk covered in what I can only describe as offerings; pieces of ribbon, daisy chains, a shell necklace, a tiny doll or two and even an old cuckoo clock.
“Why do people do this?” Izzie asked.
I winked at her. “To say thank you to the fairies.”

The first time I saw the faerie tree I wanted to hug it. And I don’t generally go around hugging trees. I may sometimes talk to pot plants, but that’s different. No; wanting to hug this tree was something deeper, more elemental. I knew it was a special place. Just how special I didn’t come to realise until I started writing the book some eight months later.

The Faerie Tree is about the tricks memory plays; the main characters, Izzie and Robin, first fall in love in 1986. They hold hands around the faerie tree and make their separate wishes for a future together but within hours tragedy strikes and they don’t meet again for twenty years. When they do, they discover that their memories of what happened before are completely different.

With all this uncertainty having credible settings for the story was vital. They have to be real; I think, because the things which happen perhaps are not. They’re puzzling, mysterious – sometimes even other worldly – and to make that work I need them to be grounded in places I actually know.

The faerie tree in the story is on the banks of the River Hamble and stands in National Trust woods near the village of Curbridge. It is just as Robin describes it in the passage above; as an added bonus you can leave letters to the faeries in the box attached to the trunk and they will leave you a reply in the plastic folder tacked to the back of the tree.

The place has a magic all of its own and although probably few visitors to the tree would realise it, the practice of decorating oaks with offerings stretches back to pre-Christian times. Perhaps it is something in a shared memory that makes people do the same thing today. If you would like a virtual walk there, visit this page of my website: http://janecable.com/the-setting/4588312199.

Because the faerie tree is central to the story I needed to use other locations nearby in Hampshire. The fact the opening scene is in Winchester is a personal doffing of my cap to the wonderful Winchester Writers’ Festival which I have attended three times and has had a huge influence on the writer I have become. But more than that Winchester is a beautiful city, the sort of place that begs to be written into any novel.

As are the places the young Robin travels through on his journey. It was such a pleasure to pick out some of the jewels in crown of the coastline west from Southampton that I actually over-wrote this part of the book in the first draft. Sometimes it is far too easy – and self-indulgent – to write paragraph upon paragraph about places you love without realising the story is going nowhere. I hope the places which survive in the final version are those which add to the story rather than detract from it.

Although most of the book is set in Hampshire, Cornwall has a significant part to play as well, in particular its surf capital, Newquay. In the summer of 2010 I spent a long weekend nearby and my sister-in-law and I booked a surfing lesson. I was hopeless, but hooked. I even went into Newquay to buy my own body board and although I didn’t realise it at the time, the shop and the town itself stayed etched in my mind. Filed away, neatly, until I had a character – and a story – who would need it.

How can a memory so vivid be wrong?

I tried to remember the first time I’d been here and to see the tree through Izzie’s eyes. The oak stood on a rise just above the path; not too tall or wide but graceful and straight, its trunk covered in what I can only describe as offerings – pieces of ribbon, daisy chains, a shell necklace, a tiny doll or two and even an old cuckoo clock.
“Why do people do this?” Izzie asked.
I winked at her. “To say thank you to the fairies.”

In the summer of 1986 Robin and Izzie hold hands under The Faerie Tree and wish for a future together. Within hours tragedy rips their dreams apart.

In the winter of 2006, each carrying their own burden of grief, they stumble back into each other’s lives and try to create a second chance. But why are their memories of 1986 so different? And which one of them is right?

With strong themes of paganism, love and grief, The Faerie Tree is a novel as gripping and unputdownable as Jane Cable’s first book, The Cheesemaker’s House, which won the Suspense & Crime category of The Alan Titchmarsh Show’s People’s Novelist competition. It is a story that will resonate with fans of romance, suspense, and folklore 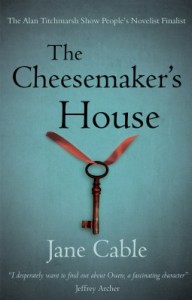