The Investigation by Jung-Myung Lee – A truly wonderful book. 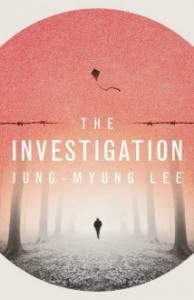 Thank you kindly to the publisher for the Advance Reading Copy.

Fukuoka Prison, 1944. Beyond the prison walls the war rages; inside a man is found brutally murdered. Watanabe, a young guard with a passion for reading, is tasked with finding the killer. The victim, Sugiyama – also a guard – was feared and despised throughout the prison and investiWgations have barely begun when a powerful inmate confesses. But Watanabe is unconvinced; and as he interrogates both the suspect and Yun Dong-ju, a talented Korean poet, he begins to realise that the fearsome guard was not all he appeared to be . . .

First of all I should make clear that I adored this one with a fiery passion. Not since “The Humans” by Matt Haig has a book touched me on a level such as this one. Absolutely addictive reading, with some beautiful prose I was fully immersed from start to finish. There is poetry within the pages – both literally and metaphorically – and the tale itself is a compelling one.

The book is inspired by the life and death of  Korean poet Yun Dong-ju and uses some of his posthumously published work, Poetry and the beauty of words is a theme throughout..and it works so well, having an effect on heart and soul that I can’t really put into words. Add to that a snapshot of prison life during war, some absolutely amazing characters and a tendency to surprise you when you least expect it and you have a reading experience that is difficult to categorise.

I really hope that people don’t read the synopsis and think this is just  a crime novel, or a war story. Whilst in a very small way it could be described as both of those things, there is after all a crime and it IS set during a war,  the heart of this novel is so far removed from those two things, it kind of sits outside them peering in. I have also seen it described as “Literary” – well yes but again, to me and to quite a few readers I know, “Literary” often transcribes into bloated and endlessly dull – in fact Vicky Newham and I were having this very discussion last night. This book is anything BUT dry, it is never dull and is fascinating, heart stopping and purely graceful throughout.

This is a story about how words have power. Power to change us, power to give us hope and joy even under the direst of circumstances. How inner beauty does not always shine – as Watanabe investigates the death of Sugiyama he discovers a man he never knew existed. It puts him firmly in the path of another man who will change his life. And running through the strands of the story are always the words – the poetry – and the heart of humanity. There is certainly more than one mystery going on here.

This is the first book from a Korean author that I have read. Kudos to the translater, this is perfect in almost every way. I believe Jung-Myung Lee will be visiting the UK later this year and I hope, I really do, that I get to see him when he does and perhaps hear him speak. It feels like one of those things that must be done.

I hope that I have inspired you to read this even if you would normally not consider such a book. Novels like this do not come along that often – for me anyway. I loved every minute of it. It brought me to tears in a cathartic way – And if I had to describe it in one word, one magical word, that word would be exquisite.

One Response to The Investigation by Jung-Myung Lee – A truly wonderful book.