Cherringham: Mystery at the Manor. A murder for every month of the year. 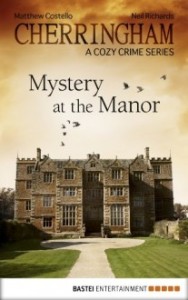 Digital Series. Episode 2:
The elderly owner of Mogdon Manor, Victor Hamblyn, dies in a mysterious fire. But was it really an accident? Jack and Sarah are skeptical – The victim’s three middle-aged children, who all live in the village of Cherringham, are possible heirs. And possible murderers – Did one of them set the fire?
“Cherringham – A Cosy Crime Series” is a series of twelve self-contained episodes. A new case for Jack and Sarah is released each month.

So its back into the fray for Jack and Sarah, a couple of great characters we first met in “Murder on the Thames” (review here: http://lizlovesbooks.com/lizlovesbooks/cheringham-a-murder-for-every-month-of-the-year/ ) and I was very pleased to see them again!

In this instalment they get together once more to investigate a fire, cause supposedly accidental, but of course its not going to be as simple as that – they are definitely suspicious of the circumstances and there is money in the mix…

I thought this was a terrific follow up, consolidating the relationship between the two at a realistic pace, giving us another intriguing Christie-esque mystery to get out teeth into and certainly making this reader want to keep up with each episode as it appears.

Im a little bit in love with Jack as a character – I look forward to finding out more about him as this continues, and I adore the quirky and fairly unusual developing relationship between the two – Sarah herself is  wonderfully drawn and very authentic, especially in her role as a mother.

All in all I would continue to recommend this to anyone who likes a nice quick read for those lunch hours and train journeys where time is limited. And I do like the idea of a series such as this – it gives you something to look forward to and its certainly worth the very reasonable price.

If you love a good cosy mystery but would love to have something you can simply dip your toes into and have a lovely reading experience this is for you.

2 Responses to Cherringham: Mystery at the Manor. A murder for every month of the year.