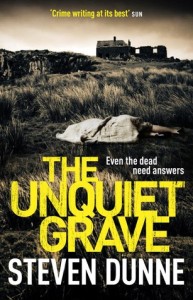 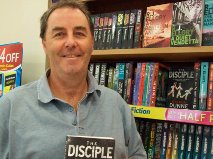 So I recently caught up with Steven Dunne to have a chat about one of my favourite books of this year so far – one I read a while back and enjoyed muchly. Here is what he had to say.

Damen Brook is an intriguing character and very much his own man. When writing his story does he lead you off in unexpected directions?

Yes, he does. I rewrite virtually all of his scenes because when I’m in the flow I tend to write as myself and have to go through each one to make sure I’ve Damen-ised it sufficiently. This usually consists of taking out my emotion and replacing it with Brook’s world-weary impassivity.

Does it take a lot of research to make the stories as authentic as they are?

It’s important to get as much of the detail as right as you can get it because if something jars in the fictional world that I’ve created, it’s very easy to lose a reader. I’m the same. If I encounter a reaction or a fact or a piece of inauthentic dialogue I immediately start questioning everything I had previously taken for granted. So, yes, within reason, research has to be spot on though I think being a detective is much more about convincing readers that you can pick up what the reader can’t.

Do you have a favourite of the series?

I’d have to say Deity purely because it was such a pleasure to write. The plot is incredibly complex and yet it all slotted together perfectly and for once my killer ending occurred to me long before the deadline arrived. Having said that, readers are already telling me that my new book – The Unquiet Grave – is even better. I’m happy to believe them but the writing was much more difficult because Brook is alone, working cold cases the entire time so the work was much more challenging.

Desert Island books. You are only allowed 2!

I’d have to take something that would sustain me over many readings and that would tend to eliminate thrillers because the joy of reading thrillers is grappling with the solution. Once known rereading is not quite as rewarding. So, being a lover of modern American literature it would have to be Catch 22 by Joseph Heller and The Corrections by Jonathan Franzen.

The most compelling category for me is top-quality drama preferably from the Seventies, an era when films didn’t dumb down to widen their audience. Assuming I’m allowed a couple I would have to take The Godfather Parts 1&2 though I’d be dewy-eyed having to leave Chinatown and Don’t Look Now behind.

First thing apart from people or pets you would rescue from a burning building.

A toss-up between my phone to tell people I’m okay and my car keys to drive to a hotel assuming the building is my home. Only my health and that of my loved ones is irreplaceable so if I had to leave the phone and the car keys behind I wouldn’t worry too much.

So. Another in the series featuring DI Damen Brook, I have been looking forward to this one and it didnt disappoint. DI Brook, back from his latest “leave” is stuck investigating Cold cases – a job he neither wants nor is particularly interested in. Determined to toe the line though, he dives in with a modicum of enthusiasm…until something peaks his interest. And of course, this IS Damen Brook we are talking about so soon he is going off at a tangent in his own way and the possibility of a hidden killer begins to emerge. With its foot firmly in the past, this novel covers decades – from the sixties onwards – and each little part of the whole is beautifully written. With subtle changes to the writing style giving each period in history its own feel, the main bulk of the story follows Damen as he sorts through the myriad of information, forgotton memories and lost details that together will give him the solution he seeks. And trust me, its quite a solution. Until DI Brook told me the whole story I didnt get the whole story – but its all there. And with hindsight makes perfect sense. So a clever crime novel, a “whodunnit” but also a tense race against time to save a life. And what was truly brilliant? I was honestly not sure whether or not the clock would be beaten and Brook would emerge triumphant- and you won’t be either. You want me to tell you don’t you? I know you do..well I won’t. Because why on earth would I spoil your fun? Or allow you to spoil mine while I watch you swim in the sea of wonderful confusion, twists and turns that is “The Unquiet Grave”.

Thank you so much to Steven for taking the time.