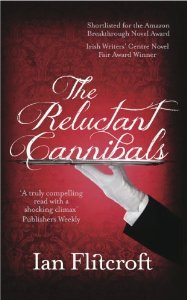 So thanks to Legend Press I recently got to read this wonderful quirky and unique novel which I enjoyed very much – review later but first of all I caught up with Ian Flitcroft and asked him a few questions. Here is what he told me….

Ok this is a bit of a cliche question but I have to know…where on earth did the idea for “The Reluctant Cannibals” come from?

Over my years in medicine I have taken an interest in odd syndromes and initially was looking to write a book about one of these: Apotemnophilia. This is a curious condition in which people desire a healthy limb to be removed and often go to extreme lengths to achieve this. The original plot line started going in a very Hannibal Lecter direction
and much darker than I intended. So I kept the cannibalism aspect, made the donation of the limb a little less gruesome and made the whole book an exploration of gastronomy. A rather non-linear progression from concept to final version!

Do you cook a lot at home? Any culinary skills you could have brought to the table?

I love cooking and also experimenting with odd recipes. Even though I have a mountain of cook books (and keep buying them) I rarely cook from books. I read those for ideas and for fun but I now prefer to cook from scratch starting with a few core ingredients and seeing where that takes me – ideally to music such as Jacqueline du Pré playing Bach’s solo cello suites.

There are a lot of interesting food facts dotted around in the novel – did it take a lot of research?

I was familiar with around half of the foody facts in the book but had great fun researching the rest, often taking long detours through old books on gastronomy before coming back to the writing of the novel itself.

Oxford is a terrific setting and one I know well. What made you decide to make it the heart of the action?

A few reasons. It’s one I know well. Eccentricity is the “new normal” amongst Oxford dons so it gave great scope for an interesting bunch of characters. Finally an Oxford don (Nicholas Kurti) was one of the inventors of molecular gastronomy back in 1969 (when Heston Blumenthal was only 3 years old). Kurti was an eminent low temperature physicist
and keen cook who gave a lecture in London that year during which he decried the fact that humanity knows more about what goes on inside a star than what goes on inside a soufflé.

Do you have a favourite character?

It has to be Arthur Plantagenet himself. I was so fond of him that I had to make him come back as a ghost.

Book you wish you had written.?

Favourite season of the year?

Anything but winter! If I had to choose then spring. Nothing can beat the green colour of newly unfurled leaves on a tree in spring. I sometimes feel envious of bears who can hibernate through winter and wake up in spring – hungry and skinny.

Coffee, Tea or something a little stronger?

A well made dry Martini. A proper one with gin, not vodka. Stirred not shaken. Twist or olive? Depends how I’m feeling – sometimes both.

So here is a book I would not have looked at twice if it wasnt coming from the amazing Legend Press who have yet to bring me a book I have not liked. And yes, they have indeed done it again….

In the academic world of Oxford University several likeminded individuals have formed a secret dining society – finding forgotton and exotic recipes they enjoy some culinary treats. When one of their number, Professor Arthur Plantagenet, discovers he has a serious heart condition he comes up with a bizarre plan that will test the boundaries of the society to its limits….

I loved this one.  It was a complete joy to read and unique in its concept and its execution. When a guest dies due to a mishap in the creation of one of the culinary treats – ““What a bloody marvelous way to die” says one character while the corpse is still fresh at the table –  the group is put under the spotlight…and consequences ensue not least due to Professor Plantagenet’s weird and wonderful plan. The whole story is gloriously accomplished – the equivalent of the best meal you will ever eat in book form. A culinary masterpiece indeed…

Dark humour abounds – and somewhat of an education. Little titbits about the history of certain food related topics can be found dotted about and it was fascinating stuff. Want to know what the practice of Sokushinbutsu entails? I know you do…and you will!

Atmospheric and intriguing you will be swept along with all the marvellous and nutty characters, and this is elegantly written in a way thats easy to love. Oh I could tell you about so much more but I’m not going to, why oh why would I spoil in any way such a treat of a reading experience – you see this is a story the likes of which you are probably not going to find again, or have read before. So savour it. Pun intended.