Touched by Joanna Briscoe. Guest post from the Author. 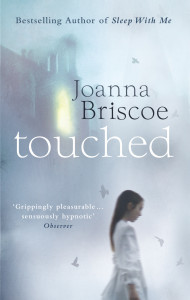 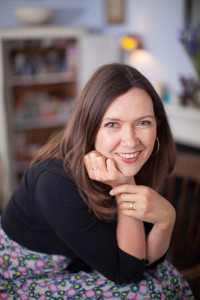 Rowena Crale and her family have moved from London to a cottage in a picture perfect English village. But despite their efforts, the cottage resists all attempts at renovation.Walls ooze damp, stains come through layers of wallpaper, ceilings sag, and strange voices emanate from empty rooms.And then, one by one, Rowena’s daughters go missing….

Joanna’s childhood home was the inspiration for the house in “Touched”. Here Joanna tells us why.

The Village of the Damned

I spent my first four years in the village of the damned. This was where the classic 1960 horror film The Village of the Damned, based on John Wyndham’s The Midwich Cuckoos, was shot. I can even see my old house in the film. This was the most picture postcard perfect village, with old red brick houses set around a Green with a duck pond, a war memorial, and fields all about. The village was so pretty, and so near the Elstree film studios, that it was often used as a location.

When I went back there for the first time in adulthood, it was almost worryingly identical to how I had remembered it, every lane, every feature of the house coming back to me, though we had left when I was four. In its prettiness, it seemed almost creepy, as though ghosts or hidden perversions haunted the perfection.

Why is beauty so powerful? Why does it delude, make people obsessed and act in odd ways when we know it’s only skin deep? This is connected to Touched in two ways – the character of the beautiful girl Jennifer, and the pretty village that hides all sorts of darkness.

What is it about children that can be so disturbing in the context of horror or the supernatural? Does the root of this lie in their seeming innocence juxtaposed with darker psyches or abilities?

I wanted to write about a child who seems very disturbing – she dresses as a shabby Victorian while her contemporaries dress in the latest fashions of the early 1960s, when the novel is set – and her behaviour is certainly odd. But actually, at some level, it is her ordinary seeming and extremely beautiful sister, Jennifer, who is, in her blankness, more disturbing.

Joanna Briscoe is the author of Mothers and Other Lovers, Skin and the highly acclaimed Sleep with Me which was published in ten countries and adapted for ITV drama by Andrew Davies.

She spent her very early years in ‘the village of the damned’, Letchmore Heath in Hertfordshire, the location for the celebrated 1960 film based on John Wyndham’s novel The Midwich Cuckoos – and the inspiration, too, for this Hammer novella.

‘A ghost story interwoven with crime, love and horror. It works on every level… Touched is a finely balanced creation, reminiscent of The Turn of the Screw by Henry James. Briscoe’s prose is sensuous, poetic, light. The rhythm is delicately controlled. A strange, fascinating tale’ Financial Times

‘Touched is a gripping novella, a waking nightmare in the home counties that is both erotic and claustrophobic. There’s a woozy atmosphere of menace, a satirical stab at Britain’s postwar commuter-belt aspirations, and an elegant, postmodern, cine-literate twist… has something of The Turn of the Screw, certainly, but with it, the brasher influence of Ira Levin, or Anthony Shaffer, screenwriter of The Wicker Man. And Briscoe is, of course, influenced by that strange and fascinating B-movie, the Twilight Zone chiller Village of the Damned… This is a haunting and disquieting parable… Touched would make a terrific 1960s black-and-white film’ Guardian

‘Children go missing from a cottage that resists renovation in a wonderfully claustrophobic horror. It’s all wonderfully creepy….Touched is thoroughly eerie, an enjoyably chilling sliver of ice on a hot summer’s day’ Thriller of the Month, Observer