Traditional v Self Publishing – Thoughts of an Author – Steve McHugh. 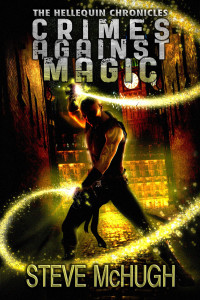 There’s a lot of talk about traditional publishing vs. self-publishing. People seem to be on one side or the other, some venomously so. But I see no reason why you can’t use both; in fact I think that’s where publishing is headed.

I self published (or indie published if you’re so inclined) my first book, Crimes Against Magic on 30th April 2012. It was my second completed book and the first that actually was good enough for me to believe people might like to pay for it. It did pretty well, selling several thousand copies over the next 8 months until I published the sequel, Born of Hatred in December 2012.

Both books together sold well enough that in Feb 2013, I got offered a 3-book contract with 47North. They would re-launch books 1 and 2 and publish book 3 (which is out on 18th Feb). It’s put me in the somewhat interesting position of being self published and published by a publisher for the same books.

Going with Amazon has resulted in having people help out with promotion and marketing stuff, alongside having a comradery with the other writers at 47North that I hadn’t really experienced before. But then apparently that’s a rare event in the traditional publishing world.

The big difference is sales. I’ll happily admit to having sold a lot more in the 5 months with 47North than I did in the same period of time going alone. So, going traditional is the way forward? Ummm… no.

You see, having a publisher put your books out there is great and I’ve had a fantastic time working with 47North, but saying that I’d never go back to self-publishing would be a bit rash.

I made mistakes when self-publishing, probably loads of them, but I’ve learned from my errors and hopefully I won’t make them again, so I certainly feel more confident about self-publishing in the future.

I can see my future in publishing being a mix of both traditional and self. There are several reasons for this, but here are the big ones.

Going with traditional publishers means you’re beholden to their timetables. A book you pass to them today might not be published for a year or two or even more, while they slot you into an appropriate place in their schedule. That time you’re sat waiting about means you’re not making money. We all need money to be able to continue to write the stories we love. Self-publishing has a higher upfront cost (seriously get a good editor, cover artist and copy-editor), but you can start making that back the second you publish. If you’ve done it right, and you behave professionally there’s a good chance you’ll sell. You may not sell millions, and like anything it’s a bit of a gamble, but there are a lot of self published writers making decent money from writing and publishing their work themselves.

The same goes for books that aren’t getting any interest from publishers. Why not try it yourself?

But on the other side, having a traditional publishing house behind you, helps raise your profile; it helps get books into places that self-published writers might find difficult to achieve.

There’s a lot of data to suggest that those who both self and traditionally publish work make the most money. I don’t know if that’s true or not, and money should never be the sole reason you decide to go with one over the other, but it would be foolish to ignore.

So my plan is to do both. This year I’ve got With Silent Screams out shortly and I plan on getting book 4 written alongside some other work that I’d like to take to traditional publishers. But I also have work I’ll be self-publishing, simply because that’s what fits the story. And that’s what you have to consider. Which of those two ways fits you and your story the best.

Saying you’ll never self publish because there’s some sort of ridiculous stigma attached, is only hurting yourself in the long run. More and more people are getting picked up by agents and publishers who managed to succeed at self publishing their work first, and I firmly believe that’s a figure that will continue to grow over the next few years. I also believe that you should try traditional publishing first. You should send out those queries and get the rejections that we all hate. You’ll gain so much knowledge about the industry, and hopefully get advice on your work from the occasional agent, that if you do decide to go it alone, you’re in the best possible position.

Besides, all of those rejections are character and thick-skin building. And if there’s one thing you need as an author it’s a thick skin.