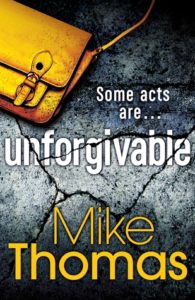 Today I’m very happy to welcome Mike Thomas, who rather rashly agreed to answer a few questions for me on Unforgivable and other things. A review follows as well (you should get this book it really is pretty darn good and available now!)

So let’s talk about Will MacReady. This is his second outing and you are no nicer to him this time than you were last time. Mean you crime writers are (that is my attempt at a bit of Yoda) So readers coming in have a bit of background – what was the inspiration behind Will and tell us a little bit about his journey before the beginning of Unforgivable.

Impressive Yoda, there. * channels Darth Vader* Most impressive. Where were we? Oh yes. Well first, the name – one of my fave horror films is John Carpenter’s ‘The Thing’, with Kurt Russell’s protagonist MacReady. I always wanted to use the name as a nod to the movie. And I’ve had the MacReady character in my head since the 90s, when TFI Friday used to be on the gogglebox and Chris Evans’ producer sidekick was called Will – remember when they all used to point at him and say ‘Wiiiiiiiiiiillllllll’? That’s how Will MacReady was named. How daft is that? Anyway, MacReady is basically me when I joined the job: a tad naïve, wants to make the world better, is slightly gung-ho but his heart is in the right place. Give him a few years he’ll be cynical, overweight, have a completely shaved noggin and an addiction to XL kebabs (with coleslaw) while working night shifts – again, just like me. In the first novel, ‘Ash and Bones’, we see him get caught up in the murder of a colleague, while on the other side of the world some dodgy geezers are transporting orphan kids to the UK for reasons people will discover if they read the book. Oh, and Will – despite the macho job full of swagger and bullshit – is unable to father children, so his wife strikes up a rather awkward deal with MacReady’s violent, ex-convict brother. It all gets a bit messy. Again, like my life at one point, but we won’t go there…

You’ve managed to write a police procedural thriller – clever. Your background obviously gives you a great insight – I didn’t realise how many different departments cover so many different things – tell us a bit about you and then how you manage to make practicalities so interesting.

Thank you. I like being called clever. Much better than ‘big nose’. Anyroad, simple really, I was a police officer for over two decades and I worked in a lot of the departments that we read about in the novel. I used to spend a lot of time just observing, really. Soaking it all up. Paying attention to even the tiniest detail, even if it wasn’t my job to do so: the chemicals used to dust for latent prints, the layout of a drug lab and so on. I knew I wanted to write about the police, so it was a case of absorbing it all for later. There are so many departments in the job. Shifts, teams and squads everywhere. Some squads even have squads within the squad, plus a squad on the side, just in case, like. It used to make my head hurt. That’s one thing I notice about some UK-set crime novels – it’s often just the CID, or even a lone CID officer, dealing with an investigation, kind of mooching about, taking his or her time and even taking a couple of days off for Christmas. Agh, that never, ever happens. Anything like a serious assault or worse will have all manner of departments dealing, from CID to major crime to CSI and beyond. It’s a huge team effort. And time is everything. There’s always, always a sense that things are getting away from you, that it’s all going too fast. That’s one thing I try to convey in the books. That crazy breathlessness of the real job.

In “Unforgivable” you are taking on a very socially relevant theme, that of terrorism and how it affects us and how the police respond to such things – what made you want to write about that and how difficult do you think it is for the Police to do their job given the utter unpredictability of these things.

I’d love to say I predicted how mad the world would be at the moment, that the novel is wonderfully prescient and all that, but it was just a huge coincidence. I started writing it in 2015, before horrors like Paris and the Bataclan, and even gave up on it twice as I thought it was too far-fetched. How wrong I was. See, not so clever now, am I? But the subject matter: with all the novels I want to steer clear of the ‘weird dude stalks attractive woman then locks her in a basement and tortures her’ trope, it’s been done to death and bores me, frankly. The first featured child trafficking and worse, ‘Unforgivable’ focuses on disenfranchisement, and how some people do terrible things to those they feel have wronged or marginalised them. As for the police dealing with terrorism – it’s incredibly difficult, as you can imagine. In terms of numbers, the police and security services simply don’t have the staff to cover all the bases. There’s a saying: ‘the police have to be right all of the time. The terrorist only has to be right once.’ And there’s the issue of privacy too – it’s a balance between protecting the public and letting people have the freedom to do as they please. Tricky stuff.

The last question was relatively deep so to offset that apparently I’m supposed to ask you something really technical about a police thingamabob – thanks Christine – so answer me this. If I come home and find thieves have been in and stolen all my books, but there is no sign of a break in who should I call?

Another thingamabob! Phew. Okay, first: what bastards steal someone’s books? Second: touch nothing, don’t go anywhere near the bookcase, call the police – local number, not the emergency line, unless my books were in your collection so then you’d obviously have to dial 999 – and try to stay out of the room you think they’ve been in. And wait. Think about forensics – Google ‘Locard’s exchange principle’ – and try not to disturb the scene at all. The police can get so much from the locus nowadays – DNA, prints, all that jazz. The fuzz will do the rest when they turn up. Probably two days later, thanks to the government cuts. Ooo, politics moment!

This definitely is the most important question, possibly that I’ve ever been asked. I love all the food. I will, literally, eat anything. I have a terrible weakness for lardy snacks such as pork scratchings, as well as the odd kilo of Stilton. Fortunately for my waistline and heart I live in Portugal, so can’t get hold of either anymore. I’ll do Thai, Mexican, Portuguese, anything – but to be rather boring I will say curry is the favourite. They don’t ‘do’ curry over here, and there is one – just one! – Indian restaurant I have managed to find, and it involves a three hour round trip just for a madras. Suffice to say, I eat my own bodyweight in naan bread whenever we get the chance to go there. And smutty movies? Well as a connoisseur of, cough, art films during my teenage years I have quite a few favourites. Not titles, specifically, but certain specialised genres. Anything involving dwarves or female feet is fine by me. For something mildly smutty but also genuinely artistic – you can watch it with your mum, even – you can’t really go wrong with ‘Betty Blue’.

Finally my standard question – is there one book you’ve read this year so far that you would like to recommend to everyone?

‘All the Wicked Girls’ by Chris Whitaker. It’s published end of August. Everyone in the world should read it, it’s a fantastic, beautiful, heartache-inducing book that made me weep openly in front of my children, which turned out quite well really as they made ‘Sad Daddy’ cups of tea for the rest of the day.

No, thank you, Elizabeth. I’ve droned on quite a bit here, so you’ve been ruddy marvellous. I’m off to watch an art film.

Bombs detonate in a busy souk, causing massive devastation.
An explosion rips apart a mosque, killing and injuring those inside.
But this isn’t the Middle East – this is Cardiff . . .

In a city where tensions are already running high, DC Will MacReady and his colleagues begin the desperate hunt for the attacker. If they knew the ‘why’, then surely they can find the ‘who’? But that isn’t so easy, and time is fast running out . . .

MacReady is still trying to prove himself after the horrific events of the previous year, which left his sergeant injured and his job in jeopardy, so he feels sidelined when he’s asked to investigate a vicious knife attack on a young woman.

But all is not as it seems with his new case, and soon MacReady must put everything on the line in order to do what is right.

Unforgivable was awarded an easy 5* from me I read it cover to cover in record time. Brilliant mix of procedural and proper thriller with a truly authentic edge. Which I guess is what you get when writers do that “write what you know” stuff.

Starting with a truly horrifying and hypnotically described event, Unforgivable begins with a literal bang and basically doesn’t really let up from there – Mike Thomas pulls the reader into the real and difficult world of policing on the ground in all its many forms – whilst our hero, Will, is set onto another case and the local community is exploding due to a controversial trial ongoing – we are taken on a dark and twisted journey to the final resolution.

The storytelling is gritty and realistic, the themes are socially relevant and entirely possible – what the author does so very well is mix up the procedural aspects with the thriller aspects and throws in a driven, haunting and large as life main protagonist in Will Macready for good measure. Will is endlessly fascinating both in action and circumstance.

Tis a proper edgy page turner this one. With some genuinely talented writing skill, and brilliantly insightful storytelling Mike Thomas has taken what he started in Ash and Bone and shot it up the ratings by quite a few points. More of that I say. 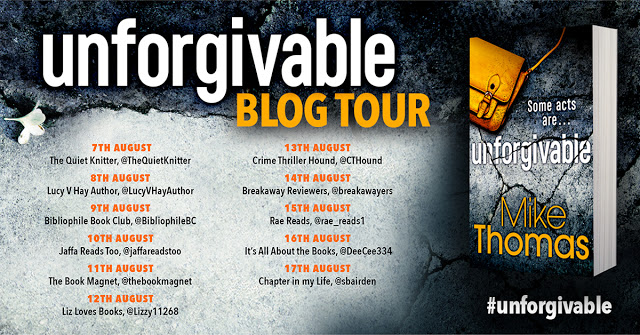 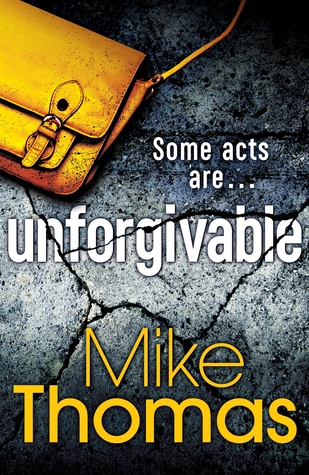