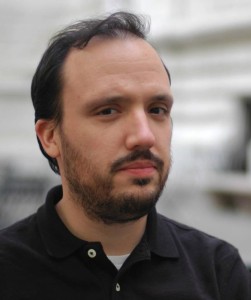 I recently read the first Pete Fernandez mystery by Alex Segura – Silent City- and rather enjoyed it. So I caught up with the author to ask a few questions and here is what he had to tell me.

Tell us a little about where the story came from – were there any particular influences?

The idea for Pete Fernandez, the protagonist of Silent City, had been bouncing around in my head for a while, and proto-Petes had been making appearances in my early attempts at fiction, which consisted mostly of short stories, unfinished novels and some comic book ideas. I wanted to write about a contemporary – someone younger who was going through the same things I was, and wasn’t so defined as most of the people I read about. After moving to NY, I got really into crime fiction. I’d always enjoyed mysteries and whodunnits, but after reading Raymond Chandler’s work, I was seriously hooked. I plowed through most of the classics and felt really engrossed by those stories – but somewhat disconnected. I couldn’t really relate to a fedora-wearing P.I. in the 60s, as much as I liked hanging out with them. Not long after, a friend of mine handed me a copy of George Pelecanos’ A Firing Offense and it all kind of clicked into place. Here was a book that read like a great punk or new wave record – sloppy and jagged with an underlying melody. And the protagonist wasn’t polished and had really no idea what he was doing. That kind of helped me bring the idea of Pete closer to another idea I was bouncing around in my head, which was to write my own crime novel. I owe that first Pelecanos book a lot, and I’d cite him as a big influence, along with the early Dennis Lehane Pat and Angie books, Laura Lippman’s Tess Monaghan series and Ellroy’s Lloyd Hopkins novels. They all present protagonists that aren’t flawless – quite the opposite – and that make bad decisions but you cheer them on anyway. That’s what I had in mind for Pete.

Pete is a great character – is there anything of you in there?

Thank you for saying that! I’ve grown fond of him over the years. I think as writers we put a piece of everything into every character we write – so, yeah, there’s some of me in Pete, though we’re not that much alike. I also worked in newspapers in Miami, so that helped feed the technical side of Pete’s job, though I never worked in sports nor was I ever a beat writer. With Pete I wanted to create someone I could have seen myself knowing – in high school or college, for example. Someone I would have maybe hung out with. Though, he seems to get into pretty dangerous situations – not sure how safe I’d be.

The setting is a character in itself – Is Miami a city you know well?

I was born and raised there and spent most of my life there until I was about 23. Setting was really important to me. I live in NY now and considered – for a second – writing a novel set here, but at the time I just didn’t feel informed enough to do that. And I do find that “write what you know” holds true in some regards, and it was really helpful to me to have Miami as the setting for the Pete books. I wanted to present the Miami I knew, the “real” city, as opposed to the neon and shiny version that you see on TV or in the movies. Miami’s a big place, with lots of nooks and crannies and good areas and bad areas. It’s much more than palm trees, beaches and mojitos, though that’s part of the book, too.

Setting is also really important in the book because I don’t think you could just transplant Silent City and have it happen in, say, St. Louis. It’s a very Miami book – it deals with things that happen there and involves people that live there, and that was a big goal for me when I set out to write it. Setting is so important to so many detective series, like Marlowe’s LA orthe DC in the Stefanos books, that I knew I had to really get it right and make it matter, otherwise it’s just something interchangeable.

Can you tell us anything about whats next?

I’m revising the second Pete novel, DOWN THE DARKEST STREET, which should be out relatively soon. I’ll keep you posted on that. It’s a dark book, and it really challenges Pete and his friends in an unexpected way that I hope people will enjoy. While it shows a more experienced Pete, he’s still a flawed person dealing with an overwhelming situation, and that doesn’t bode well for him. I also have a short story – co-written with my friend Justin Aclin – in an upcoming sci-fi anthology titled APOLLO’S DAUGHTERS. Looking further ahead, I’m about halfway through writing the third Pete novel and i have some comic book ideas I’m trying to nail down. So, lots of stuff!

This is a tough question! I have so many “favorites” it’s nearly impossible to pick one. I find great comfort in reading a really well-crafted PI novel, so I tend to burn through those while on trips or away form home – like the Lawrence Block Scudder books or Reed Farrel Coleman’s Prager novels. I’ll read anything by the following writers: Daniel Woodrell, Don Winslow, Megan Abbott, Sara Gran, Greg Rucka, George Pelecanos, Dennis Lehane, Laura Lippman and James Ellroy.

If you could live anywhere in the world…

I’m really fond of NY, to tell you the truth. Though, this winter has been brutal. I thought I was a grizzled New Yorker, since I’ve lived here for about eight years. Not so. This winter really reminded me that I have tropical blood.

No 1 item on your bucket list – if you have one.

I’m not sure. I would like to go to Cuba at some point and see where my family’s from. That’s definitely on my radar. Overall, I’d like to travel more – especially outside the U.S.

Thank you so much Alex!

Pete Fernandez is a mess. He’s on the brink of being fired from his middle-management newspaper job. His fiancée has up and left him. Now, after the sudden death of his father, he’s back in his hometown of Miami, slowly drinking himself into oblivion. But when a co-worker he barely knows asks Pete to locate a missing daughter, Pete finds himself dragged into a tale of murder, drugs, double-crosses and memories bursting from the black heart of the Miami underworld – and, shockingly, his father’s past.

So the first in a new mystery series from Alex Segura and boy, that was a terrific start – mainly because our protagonist, Pete Fernandez is so well drawn so you get right behind him at the start even though he kind of falls through life and has a spectactularly illogical decision making process. In that there is not really a process at all…I loved that because its a bit like me…shall I do that? Oh yes why not. What could POSSIBLY go wrong?

Set in Miami, the city comes to life in the authors hands  – rich and vivid with a definite dark underbelly, it put me in mind of “Miami Vice” a show I used to love which visually had the same feel to it – bright lights and warm nights hiding a less salubrious reality..where danger lurks around every corner.

As Pete traverses the city streets trying to track down the missing Kathy, and runs into all sorts of trouble, the mystery element is well imagined and intriguing. Decent action all the way and a great twisty turny tale that resolves realistically, this was a fascinating and compelling story with great character development and excellent scene setting to keep you involved all the way. I will definitely be reading more in this series.