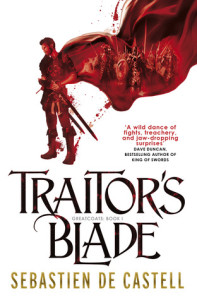 I recently read “Traitors Blade” and it really was a most terrific adventure! In a while you can see my review and how you can get 30% off your very own copy! First though I caught up with author Sebastien De Castell and asked him a few questions about the book. Here is what he had to tell me.

Tell us a little about where the story came from?

Like most novels, Traitor’s Blade doesn’t come fully-formed from any one single place. The first scene in the book – three once idealistic swordsmen realizing their lives have been in vain – was always the starting point of the novel for me. The thought of devoting oneself completely to a sort of code of conduct only to discover that it has completely and utterly failed felt like a story that would intrigue me in any genre.

So that’s where Traitor’s Blade (originally inarticulately titled ‘Three of Traitors’) began. But from there, every element in the story came from a variety of experiences and influences. The idea for the Greatcoats – these sword-wielding travelling magistrates – came from reading about the English itinerant judges in the Middle Ages. These were judges appointed by the King and sent on year-long circuits of towns and villages where they would hear cases and render verdicts. I wanted to take that idea and explore what would happen if these travelling magistrates had to deal with local nobles who might not like their verdicts and might decide it was easier to kill off the judge than pay the fine.

The coats that the characters wear came from an actual greatcoat my brother gave me. I was working as an actor and kept finding myself on night shoots, freezing my butt off waiting to for the next shot and I discovered that this coat was perfect – it kept me warm, had tons of pockets large and small where I could hide things I’d need between takes, and felt like something I could live in if I had to. That gave me the idea for the greatcoats that Falcio, Kest, and Brasti wear – a combination of mantle of office and flexible armour perfectly suited for a travelling duelist. Now if I could only just find one like theirs for myself…

The fight scenes are magnificent – as a fight choreographer, did that make it easier to bring them alive on paper or harder?

That’s a good question. I think it made it easier but not for the reasons people might think. A great action scene isn’t about describing every move and weapon. I personally don’t enjoy reading fight scenes where the author is determinedly showing off how much historical knowledge he or she has. Violence in and of itself is actually pretty boring.

But my time choreographing sword fights for the theatre taught me something that I think is vital: every fight has to be its own story. It has to have a beginning, middle, and end. Each one has to be distinct and meaningful, and every movement has to be a reflection of the character. I love writing Falcio’s fights because he sees each one as a problem to be solved – he tries to intellectualize the battle and find some ingenious way to survive. But his own past sometimes comes to the fore and takes him over. In those moments, all of his skill and intellect disappears, replaced by rage and recklessness, and we realize he’s not the man he thinks he is.

Ultimately the writer’s job isn’t so much to meticulously choreograph the fight – it’s to give the reader the bits of insight that enable them to build the scene in their minds. In that sense, it’s really the reader who choreographs the fight and the author simply gives them the tools to do so.  One of the most dramatic fights in Traitor’s Blade doesn’t happen on the page at all: Falcio is about to face a smiling armoured man with an axe – a fight he doesn’t think he can win – when the tragedy of his past comes crashing down on him. We shift from the fight into that horrific memory, and when we come back, Falcio’s opponent is dead on the ground and he himself is in a state of shock. At no point is a single move of that fight described but when I ask readers about it they remember it happening in detail.

Who are your writing heroes?

You know, it’s a funny question because I tend to separate the writer from the book. When I first read Moonheart by Charles de Lint as a teenager I was simply blown away by this fantastical world he created inside of our own. Raymond Chandler’s The Big Sleep is still one of the best noir novels I’ve read. I see some of that style inside of Roger Zelazny’s classic work, Nine Princes in Amber and both of those voices have had an influence on me.

But I think that a hero (writing or otherwise) is someone you want to model yourself or your career after. Looking at it from that standpoint, I think Neil Gaiman would be a writing hero to me. He’s created so many great stories, across multiple mediums, and always does it with his own style and voice without chasing trends. When I’ve heard him talk, he seems to genuinely like his audience and his peers. Most importantly, he seems like he’s having fun along the way!

I’ve definitely joined the greatcoats – are you allowed to tell us a little about what’s next?

I can tell you that there are four books in the Greatcoats quartet and that the second is with my publishers getting ready for editing. Books 3 and 4 are plotted, and at about four o’clock in the morning a few weeks ago I suddenly woke up, walked into my office and typed the opening page of the third book.

The second book is tentatively entitled, Greatcoat’s Lament, and it takes our heroes on a darker and more perilous journey than they’ve faced before.  Falcio will come to question his idealized memories of King Paelis, Kest will pay the price that comes with wanting to be the greatest swordsman in the world, and Brasti will discover he can no longer get away with simply playing the charming rogue. Valiana, Aline, and the Tailor all take more central roles in the second book than they did in the first, and the clash between their different visions of right and wrong will shake Tristia’s very foundations.

Although The Greatcoats is a four-book series, I’m committed to ensuring that each book is a complete story in and of itself. I was determined with Traitor’s Blade to end the novel at a point that would give readers a satisfying conclusion rather than simply a cliffhanger, and I’ve worked very hard to do the same with Greatcoat’s Lament, so I very much hope that readers will enjoy it.

Falcio is the first Cantor of the Greatcoats. Trained in the fighting arts and the laws of Tristia, the Greatcoats are travelling Magisters upholding King’s Law. They are heroes. Or at least they were, until they stood aside while the Dukes took the kingdom, and impaled their King’s head on a spike.
Now Tristia is on the verge of collapse and the barbarians are sniffing at the borders. The Dukes bring chaos to the land, while the Greatcoats are scattered far and wide, reviled as traitors, their legendary coats in tatters.

So here we have the start of a brilliant new series, a glorious adventure of a novel with terrific characters, and a sprawling magnificent  story which gives a truly addictive reading experience.

It put me in mind of The Three Musketeers but with a wonderful humerous yet ironic undertone, some laugh out loud moments (Falcio and gang are both driven yet realistic and this leads to some extraordinarily witty and whimsical exchanges) and a whole load of action of the swashbuckling variety that will have you on the edge of your seat.

Intrigue,  betrayal, redemption, sword fighting, mystery, mayhem, you name it you will probably find it somewhere in the pages. The story romps along at a tremendous pace, holding you in its thrall until you  get to the last moments which WILL leave you wanting more.

The mythology and world building are perfectly constructed, I loved the simple flowing yet beautifully written descriptive prose and I fell in love completely with the characters and the world they inhabit…I truly can’t wait to find out whats next.

Brilliantly concieved, cleverly executed and a whole bucket of fun, this will be one of the most entertaining novels you read this year.

If you would like 30% off, simply become a Greatcoat for a day – find out how here!

What is YOUR GreatCoat name? Do come back and tell me!