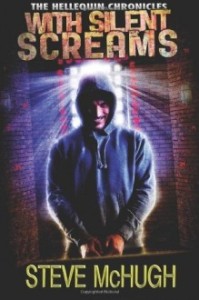 Having recently read the 3rd book in the Hellequin series I thought it was high time I dragged Mr McHugh kicking and screaming back onto the blog – its ok, he answered the questions and is now safe back at home….

So, third outing for Mr Garrett – how do you feel he has developed since we first met him back in “Crimes Against Magic”?

Well in Crimes he didn’t really know who he was, so behaved in quite a cocky manner. He slept around and became a thief, mostly because it was a fun way to make a living. By the time Born of Hatred and now, With Silent Screams, comes around he’s back to having all of his memories, so his confidence is less cocky and more assured of his abilities.

The blending of well known mythologies into Nate’s own story is really intriguing – How did the idea for that first start to form for you?

I’ve always loved mythology and wanted to use it in the stories, but I figured instead of just having Norse or Greek, I’d have all of them as being real. By the time it came to write Crimes, Nate had already been fully created in my head, so the story formed around him and the various mythological characters were used as the story warranted.

I have spreadsheets that just lists mythological beings and their relationship with Nate and each other.

The stories have some adult themes and violent aspects, but very well balanced – is that quite hard to achieve?

It was in Crimes. After I wrote that book I pretty much decided that sex scenes weren’t really for me, so from the 4 or so that are in book 1, there’s 1 short one in book 2 and the same in book 3. I’m not prudish or anything like that, but I felt that they were a weak part of book 1, and with Nate’s returning memories and personality they didn’t need to be continued for the remaining books unless they were utterly necessary.

The violence part is quite strong in all of the books, mostly because Nate lives a violent life with violent people. You can’t just have continuing action and fights, you’ve got to actually have a story to put it all in.

I’m currently writing book 4, Prison of Hope, and then I’ll be going on to write the first book in a new trilogy called Chimera. After that Hellequin book 5 needs writing. Because, as I’ve learned, books don’t write themselves. Which is probably an oversight for my career choice.

Probably The Black Angel by John Connolly. I’ve only recently started to read the Charlie Parker books, and the first 4 are very good, but 5 was just fantastic. Can’t wait to read the rest.

Book you WISH you had written.

I don’t really wish I’d written anything else, mostly because when I read something by an author I enjoy, I know there’s a part of them in that book. Saying that, I wish I’d written Neil Gaiman’s, Fortunately, the Milk, because it’s astoundingly brilliant.

Astronaut. Seriously there’s no cooler job anywhere than being an astronaut. Maybe an astronaut ninja. That would be awesome, although I doubt there’s a big need for one.
Something you wish you were good at but are not.

I wish I could draw. I have zero artistic abilities in terms of actually drawing anything that isn’t a stick figure. If I’d been able to draw I think I would have written a comic book by now.

With thanks to the author and publisher for the review copy.

His name is Nathan Garrett, but he’s also known as Hellequin. And murdering one of his friends and trying to blow him up is a good way to get this centuries-old sorcerer’s full attention…

A long time ago (It feels like now) I impulsively purchased “Crimes Against Magic” the first in the Hellequin series from Steve McHugh featuring sorcerer Nate Garrett and immediately and irrevocably fell in love.

I had only just started my foray into Urban Fantasy and was looking for another fix and here it was right here. Now we are onto Book 3 (with a short story bridge as well) and these just get better and better. For sheer reading fun, it rarely gets better than this- a glorious mix of known mythology, a brand new world to explore, some tremendous characters and always a heartstopping and well constructed story.

In this instalment someone makes the rather extreme error of killing a person Nate is fond of. Then attempting to blow him up. Follow all that with a good deal of smug goading and your fate is probably sealed. And so it begins.

Once again we have a past/present twist to the tale, some magnificently evil bad guys and some beautifully imagined settings where magic and reality collide. WereLions, Cave Trolls and Guardians, other realms, wizardry and mayhem all tied up together in a fantastic package of adrenalin rushing goodness. Like a Rollercoaster ride in novel form, you are in for one hell of a ride.

These are adult in nature – the violence is as violent as real violence is.. the fights are down and dirty with no holds barred and Nate himself is the very definition of anti hero. He kind of follows his own moral code but when the chips are down if you are in his way he really is not going to give much thought before wiping you off the face of the planet. I love that about him. Flawed yes, not indestructible by any means but if you are going to annoy him you had better be sure you can either beat him at his own game or that you can run REALLY fast.

The supporting cast of characters are all superb. I am absolutely in love with Nate although he does now have a rival for my affection after this story in the form of Galahad.  Caitlin is my favourite kind of kick ass female – one who stands no nonsense but is very aware of both her limitations and her surroundings. As for Hades well, who DOESNT love Hades? I am definitely an unapologetic fangirl all round for this series. All the way.

This is definitely a set of books that has grown in stature since its humble beginnings as Nate and the mythology surrounding him has grown, developed and taken on a life of its own. So, all in all a terrific 3rd book in a series that is now absolutely one of my favourites in the Urban Fantasy stakes alongside Felix Castor and Alex Verus. Possibly not for the faint hearted but if you like your Urban fantasy absolutely Urban and fantastical these will probably bring great satisfaction.

Note: With Silent Screams can easily be read as a standalone book with no problem whatsoever, so if you fancy starting with this one, go right ahead! 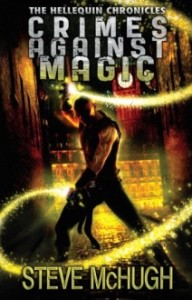 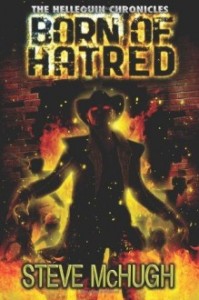 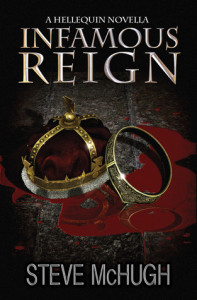 Steve’s been writing from an early age, his first completed story was done in an English lesson. Unfortunately, after the teacher read it, he had to have a chat with the head of the year about the violent content and bad language. The follow up ‘One boy and his frog’ was less concerning to his teachers and got him an A.

It wasn’t for another decade that he would start work on a full length novel that was publishable, the results of which was the action-packed Urban Fantasy, Crimes Against Magic.

Steve McHugh lives in Southampton on the south coast of England with his wife and three young daughters. When not writing or spending time with his kids, he enjoys watching movies, reading books and comics, and playing video games.

One Response to Steve McHugh talks Hellequin. With Silent Screams.