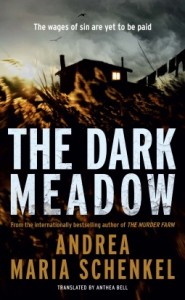 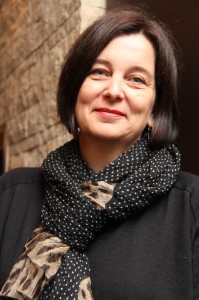 Thanks to Quercus I was recently lucky enough to receive a beautiful little hardback copy of “The Dark Meadow” by Andrea Maria Schenkel, which was an emotional and intriguing story of murder and the killer that got away…

I asked the author some questions and here is what she had to tell me.

What was the inspiration behind “The Dark Meadow” ?

I came across an old newspaper article that expressed outrage at the result of a murder trial. The journalist writing the story expressed dismay that the victim’s father didn’t confess to killing his daughter—he wrote that “everybody at court knew he was a liar.”

So, I wanted to know if the father really was a liar. But I couldn’t find a lot about the case—records were hard to come by–so I wrote my own story. I have no idea if it happened the way I wrote it or not.

The attitudes of the times, especially with relation to Afra, are very different to today – was a lot of research involved to make it authentic?

Yes. It is always helpful to read about the time, about the conditions of living, like how to wash clothes in times before washing machines and dryers, to talk to people who are old enough to have a memory of this period. My mother, for example, was born in 1922. She passed away when the book came out, but she was talking how it was at that time – before, during and after WWII. That was a big help too.

Which character did you find the most fascinating to write?

I liked Afra very much. She is a strong person, she wants to be independent, she wants to be free and at the same time she is caught in conventions and in the time period and the region she is living.

My last book in Germany came out a few months ago—Taüscher. It’s about double murder in a small town in Bavaria in the 20’s, but the novel’s underlying story illustrates how living in the post World War I period—under a new form of government, the Weimer Republic, and under challenging economic conditions—affected this community.

And I am working on my first book that takes place outside Bavaria—in fact, outside of Germany. It will break new ground for me in several ways.

I like the book “Ich nannte ihn Krawatte / I Called Him Necktie” by Milena Michiko Flasar. It is no crime novel. The author is half Austrian, half Japanese and I like her way of writing.

Sitting with my laptop on the bed, a cup of coffee next to me. I really like it.

Tea, Coffee or other?

Most of the time coffee with milk and without sugar, but when in the UK or Ireland, I prefer tea. I tried it countless times, but tea never tastes as good outside this region.

Thank you so much Andrea.

Translated from the German by Anthea Bell.

Bavaria, Germany, 1947
At the end of the war, Afra Zauner returns to her parents’ cottage on the edge of Mauther Forest. Unmarried, and pregnant. As she struggles to raise her child, her father’s shame, her mother’s fury and the loud whispers of the neighbours begin to weigh upon her. She doesn’t believe in her sin. But everyone else does.
And someone brings judgement down upon her.
Many years later, Hermann Müller is throwing a drunk out of his tavern. A traveller, who won’t stop ranting about a murder left unsolved, about police who never investigated. Out of curiousity, the file is reopened. And in the cold light of hindsight, a chilling realisation creeps upon the community.

A very evocative and cleverly written murder mystery novella – telling the story from several viewpoints we are inexorably led to the truth about a murder 18 years cold – this is not a police procedural or a traditional mystery/thriller, it is more a story of retrospection, looking back from a distance to realise that what was assumed was not actually true.

There are several themes running through the narrative that add to the overall ambience – the attitude of the day towards single parents, the understanding or lack thereof of dementia, a different world both in philosophy and procedure that leads to a murderer going free. As we learn about that day so long ago, interspersed with statements from various players in the present time, a remarkable and emotional tale comes into the light.

I was very taken with all the characters, the atmosphere and sense of place was magnificent, painting a picture for the reader as the story unfolded – a short but sweet read that will have you immersed into the tale throughout and awaiting the final outcome.

Overall an excellent book and one I would recommend especially to anyone who likes the mystery genre but are looking for something a bit off the beaten track.