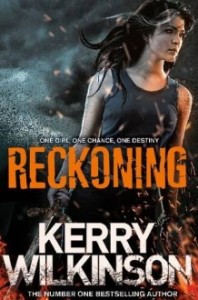 So the week of interviews continues and today its the turn of Kerry Wilkinson (who makes me giggle a lot) talking about Reckoning, the first in the Silver Blackthorn trilogy and a darned good read. I know because I’m lucky enough to have read it already. Its out tomorrow so don’t hang around! Here is what he had to tell me.

When I was young, I read a Doctor Who serialisation named The Time Warrior. In it, a sontaran has crashed in Britain’s middle ages and is trying to repair his spaceship. In order to get the parts he needs, he’s providing technology and weapons to the locals who think it is magic. That was the first time I thought that one person’s technology is another’s magic. It nestled with me for a long time and, after I started to write books – my crime series – I wanted to try creating something else. Silver’s world is in regressing future, in which there is little to no electricity and society is moving back towards a medieval-ish scenario. With that, there are all sorts of technological bits and pieces left around: some that work, some that don’t. I really like that mix of old and new.

Silver is wonderful – a bit of a geek – was she fun to write?

Fiction, be it books, movies, television or whatever, frequently throws up heroes who are too perfect. In real life, people learn through making mistakes and education. I think all of my characters, be it Silver here, or Jessica, Andrew, Jenny or anyone else in my crime novels, are flawed people. Silver messes things up, but never the same thing twice. She’s brave and knows where her abilities lie. I actually think that’s perhaps the most-important personality trait to have. It’s not about being brilliant at everything – nobody is – it’s finding out what you’re good at and pushing that as far as you can. I actually think the whole “if at first you don’t succeed, try, try and try again” advice is dreadful. If you’re no good at something, ditch it and find something you can do. Everyone’s good at something.

In Silver’s case, she’s a 16-year-old girl and isn’t going to be able to fight off big strong men. She has to figure out how to make things work around that – to make brains triumph over brawn. So, to finally answer the question (!), yes she was fun to write. It’s easy to cheat when you’re writing a book – this character overpowers that character and they’re free – but I tried not to do that. Almost everything that happens to Silver happens because she’s made it that way.

Do you have the whole story in your head or are there still things you don’t know?

I always plot everything out chapter by chapter before I actually start writing and that’s where the story can take its twists and turns. Sometimes, though, things take their own course. I don’t want to spoil too much but, by the end of Reckoning, Silver has a bit of a gang around her. That was never really meant to happen but the characters and their stories took on a bit of a life of their own. It made the trilogy as a whole so much better, because there’s depth, rather than it simply being Silver’s tale. That said, the broad plot that links through the three books never changed from when I first thought of them. The very final chapter of book three is exactly what was in my head when I thought about how things would end. It’s the smaller parts within the stories that sometimes change.

Can you tell us a little about whats next for Silver and co?

I don’t want to spoil too much but Renegade is a different type of story to Reckoning. My agent called the trilogy a trilogy a “British odyssey”, which I kinda like.

Book you wish you had written?

Probably the Harry Potter books. I love the idea that all of it is happening under the noses of our “real” world. The characters are so great, too. Azkaban is excellent but my favourite of the seven is Order of the Phoenix, largely because of how Umbridge is such a magnificently horrendous creation. It’s far easier to come up with a character that readers love as opposed to hate – properly hate – and she embodies that.

I wouldn’t call it a habit but my fingers and toes are incredibly flexible. I can do all sorts of weird things, such as pop my thumb out of joint without touching it.

If you ruled the world one thing you would change…

In the village of Martindale, hundreds of miles north of the new English capital of Windsor, sixteen-year-old Silver Blackthorn takes the Reckoning. This coming-of-age test not only decides her place in society – Elite, Member, Inter or Trog – but also determines that Silver is to become an Offering for King Victor.
But these are uncertain times and no one really knows what happens to the teenagers who disappear into Windsor Castle. Is being an Offering the privilege everyone assumes it to be, or do the walls of the castle have something to hide?
Trapped in a maze of ancient corridors, Silver finds herself in a warped world of suspicion where it is difficult to know who to trust and who to fear. The one thing Silver does know is that she must find a way out . .

So, more dystopian YA and I just can’t get enough of it especially when it is as well written and addictive as this one turned out to be – with a flowing imaginative tale of a world moved on.

We’ll get the immediate and obvious comparisons to Divergent out of the way first – yes, in this novel, when children reach a certain age, they take the “Reckoning” which puts them into one of 4 groups in society and decides their place, what type of work they will undertake, amongst other things. And that is where the similarity ends – this is very much its own tale of adventure and what an adventure it was!

Silver Blackthorn is one of only a few chosen to become an “Offering” to the King. Considered to be a high privilege, and bringing great benefits to the families of the chosen, still if you are an offering your life as you knew it is over. No-one knows the true nature of what it means as those chosen are not seen again. When Silver arrives at Windsor, and comes face to face with her King, she begins to realise that all is not well and she is going to have a fight on her hands simply to survive..

Things I loved about this one: The setting. It is in the UK and therefore all the more real to me – and also the premise for why the world is as it is now – authentic and not at all beyond the realms of possiblity. Then there is Silver herself – she’s a tomboy, a bit impulsive, fairly brave most of the time but definitely not the first choice you would necessarily make as a saviour of others. Technology is her thing – she is savvy, has taught herself everything possible, and is actually a bit of a geek. I loved her – she was a perfect “foil” for the world she inhabits and as she discovers the truth behind the propoganda, you are dragged along happily in her wake as she attempts to unravel the impossible.

There are quite a few nods to the things that “work” in this genre – the dual possible love interests (although this is very low key for the moment Silver has far to much to worry about to be thinking about boys!) the dictatorship of a seemingly benign “government” and a few characters who are not what they first appear. Its all done extremely well however and the supporting cast of characters all offset our heroine beautifully and keep you right on the journey with them.

Overall this is a great example of its kind – I DO however have a complaint. I finished this one, came out of the book daze, looked around me and realised I’d have to wait to find out what happens next. WAIT? Well we all know how good I am at THAT. Sigh. Mr Wilkinson may not be able to see me but I tell you now…I’m glaring.