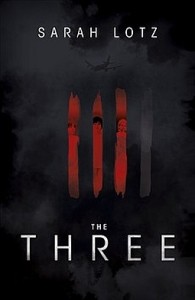 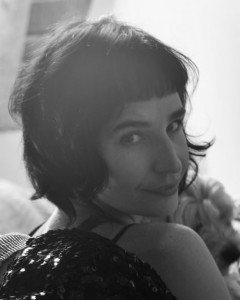 One of THE books of the year for sure is “The Three” by Sarah Lotz – a wonderfully addictive read and one I barely put down. I was lucky enough to get to ask Sarah a few questions and here is what she had to tell me.

Tell us a little about where the story started for you.

I’m flight-phobic, and for years I’ve wanted to write a novel exploring this. I started by writing the opening scene, in which Pamela May Donald experiences – in real time – the plane in which she’s travelling losing control and plummeting out of the air. I thought that facing one of my fears and writing it out might be cathartic, but it had the opposite effect and gave me nightmares for weeks.

It is very addictive reading – did you always intend it to be in a “documentary” style?

I initially planned to write it using a ‘traditional’ third-person narrative. But as I started experimenting with the main characters’ voices, I realised this approach just wasn’t working, and needed to find a different way into the story. Plus, I really admire the oral history route Max Brooks took in World War Z, and love the concept of unreliable narrators. I hoped that this would add another element to the novel. Of course, the danger is that an unconventional approach can be alienating to some readers, which I absolutely understand, but I couldn’t have written it any other way.

Did you have a favourite character to write?

Yes, Paul Craddock, who becomes the guardian of his niece Jessica, one of the three crash survivors. On the surface, he’s cynical and snarky, embittered from years of failing at his chosen career. Underneath, he’s deeply vulnerable – more so than the majority of the other characters, I think. I identified with him quite a lot, so he was great fun to write.

The way the world reacts to the events feels very authentic – Is there a general fascination with the unexplained ingrained in us do you think?

I think it’s human nature to want to make sense of seemingly mysterious events, which is why there are so many disparate theories out there attempting to explain or debunk everything from 9/11 to the Bermuda Triangle. And it goes without saying that the quest to understand the most fundamental mystery of all – why we’re here – is the basis for many religions and philosophies. What really interests me is why so many people choose to believe in theories that are more left-field, rather than accepting alternative and scientifically proven explanations for various phenomena.

Is there more to come set in this world?

Not in this specific world, but I can’t say more without spoilers!

A book you’ve read recently that captured your imagination.

Erk. Can I pick several? Lauren Beukes’s Broken Monsters, which will be out in May, is beyond chilling and superb. M R Carey’s The Girl With All the Gifts injects new life into the walking dead genre. And as I know you’re a fellow Sarah Pinborough junkie, I’m going to pick The Language of Dying, which is extraordinary and made me weep.

Cooking. I’m terrible at it, but I’m very greedy and love food.

Precision/stunt driver. I love cars and driving (I basically have the soul of an eleven-year-old boy).

Four disasters. Three Survivors. A message to change the world…

Yes well. For those of you who were hanging out on Twitter a few days ago if I say “What Sarah Pinborough said” you know you have to immediately add this to your reading list right? If you missed that absolute little gem, sorry, you’ll have to make do with my random rambling. I will attempt to write a more articulate review nearer publication…or I may just leave it at this…

So you know when you finish a book and then sob quietly into your pillow thinking “WHY did I read it, now I can NEVER read it again for the first time?”. There is that. And you know when you are reading a book and you have to keep going back and reading sections again because they are so delicious? Yep there is that as well. And very occasionally a book captures your imagination SO much that you look up half expecting to see Kay Burley on Sky News trying desperately to interview random passers by about an event from the book? Yep got that a lot as well…

Here we go then. One dark day, four planes crash for different reasons on different continents…from the wreckage of those planes emerge three survivors. All children. One woman who briefly survived leaves a message…and what follows is a series of events that really will change the world. Told as a “book within a book” in an expose style we get an absolutely addictive narrative mixing up interviews, articles and letters from various people involved in the aftermath of that day…and watch open mouthed as the world goes mad. Conspiracy theories are rampant and its all so terribly realistically scary, hence my many “Kay Burley” moments…

And creepy children. My achilles heel. See I do NOT get scared by books, movies, random noises in the night but show me a child who is creepy and I’m behind the sofa immediately. But ARE they “creepy”? Or is it just me? It MIGHT be just me. Its probably just me…right? Read the book. Its probably just you….

Imaginative, intelligent, brilliantly written, giving any mind an intense work out of the kind that extends into your dreams (or nightmares) and takes over your life for a while, this is absolutely one NOT to be missed. When you can, grab a copy, find a day that is YOURS, find yourself a corner and enter the world of “The Three”…it may be closer than you think…

Find out more here if you dare http://www.sarahlotz.com/home/