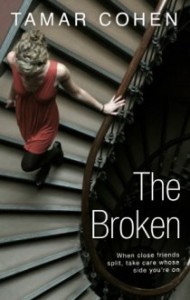 My book of the year so far has been “The Broken” by Tamar Cohen, totally addictive reading, one of those you just cannot bear to put down. As part of her blog tour I was very lucky to get to ask her a few questions and here is what she had to tell me.

Tell us a little about how the story started for you?

How do these things ever start – with me cynically plundering my friends’ lives for inspiration! Seriously though, the germ of the idea came from a time when my kids were young and we were firm friends with a few couples all with young kids, and then one of those couples split up, and it caused massive ructions within the group. It’s amazing how something like that makes you question your own relationship and can de-stabilise an entire social network. Obviously we all swore blind we’d stay neutral and remain friendly with both partners, but as their split became more and more bitter, it was increasingly hard not to take sides. I really wanted to explore that idea of being drawn against your will into someone else’s unraveling relationship – and being me it also had to have a suitably dark twist on it, obviously!

Were your sympathies with any one character in particular?

I think my sympathies shifted as the book went on. It was interesting, after writing three first person books, to do a third person one, from the alternating perspectives of Josh and Hannah. When I was writing from Hannah’s point of view, I really felt for her, but the next chapter I’d be writing from Josh’s and my sympathies would be with him. But I also felt at various times for Dan and Sasha. Divorce is a horrible business, and nobody comes out unscathed.

How difficult was it to write a break up so realistically and yet give it a hidden element?

Sadly, I’ve witnessed enough break ups that writing about divorce came quite naturally. So that wasn’t the hard part, but trying to weave the emotional realism into the structure of a psychological thriller, ratcheting up the tension at the same time as building up the emotional quotient was much trickier than I’d anticipated.

Do you believe in Happy Ever After?

Wow, Liz, that’s a bit of a sucker punch question you’ve sneaked in there! I guess the answer is I believe we make our own happiness. I don’t believe someone else can make our happiness for us, and it’s too much of a responsibility to expect them to. So, in Dan’s case, he’s moving from one woman to another with this romantic notion that everything will be perfect, whereas I think we always take ourselves with us from one relationship to the next, so if we don’t work on ourselves we’re just going to end up repeating the same patterns. If you always do what you’ve always done, you’ll always get what you’ve always got – it’s a cliché but it’s true.

Nothing beats a physical book with a cover you can stroke, and pages you can turn down. But I’m not so much of a purist that I won’t stock up my Kindle before going on holiday.

One Book you recommend to everyone

This last year it’s definitely been Apple Tree Yard by Louise Doughty. I absolutely loved that book. To me it’s got everything – fabulous writing, complex characters and a tight plot with tension that builds and builds until you can’t sleep until you’ve found out why she’s in the dock and what’s going to happen to her.

Now the weather’s finally showing signs of picking up, I’m going to vote for a long, drawn-out barbecue with friends. Sunshine, tasty food, good company and a chilled bottle of wine close to hand. Perfect.

Crikey, where do I start? I suppose recently I’ve been wishing I was good at running. Now I’ve hit a certain age, all my friends who were previously couch potatoes like me have started joining running clubs and signing up for marathons and fun runs and 5Ks and 10Ks and I’m feeling very inadequate. But every time I try to run anywhere I end up slumped against a tree or a lamppost gasping for breath. I just don’t think I have the Running Gene. Or at least that’s what I tell myself!

Its very hard to put into words how TOTALLY addictive this read was…every time I put it down it called to me to come back, to the point that I actually got quite grumpy when I had to do mundane things like making sure I fed the children….Grumpy. Thats how good it was.

Take two married couples – best friends – spend the majority of their time together, help out with each others kids, close as any friends ever were. Then split two of them up and set them at each others throats – what would you do? Could you choose one over the other? This is what the author explores here and it is absolutely fascinating, brilliant and evocative reading. As one couple struggle to hold their own marriage together in the aftermath of an untenable situation, you will not be able to look away. And not everyone is telling the whole truth..

Cleverly constructed to give you hints and nuances of each individual’s situation and thoughts, you will find your sympathies wavering between one person and the next, often feel like you would like to lock them all in a room somewhere and throw away the key, but mostly just be desperate to know what the heck is going on. The characters are amazingly real, popping off the page and into your head at random moments, telling you their side of the story, inducing either sympathy or outright rage and generally messing with your social life. Be prepared to put that on hold for the duration…

Dare I say this is the best book I’ve read so far this year? I think I do dare, although its up against some stiff competition. 2014 is looking to be one heck of a reading year…