Aye Write -Getting to Know the Authors. With Daniel Cole.

Ragdoll is out this week – more on that tomorrow – YAY but the lovely author Daniel Cole is also appearing at Aye Write – ticket info and book info to follow. Gordon of Grab This Book and I are getting to know a few of the appearing authors  so keep an eye out on his site too. Today it’s Daniel’s turn. Having received his answers I kind of love him. So if you can, get along to Aye Write in Glasgow and see his event. By the way the book is blinking brilliant!

It’s called Ragdoll and in the category of books about serial killers and dismembered body parts stitched together, I’d say it definitely falls into the more light-hearted and entertaining end of the spectrum. It certainly isn’t a straight police procedural. It’s larger than life escapism, it’s got a whole cast of great characters, a very cinematic feel, and lots and lots of dark humour.

I grew up in Bournemouth and it was fine – thank you for asking.

Definitely not academic, so I’ll say creative… although I’m not entirely sure that fits either. I did manage to get through A-Level Music Technology without being able to read a note of music though, which is quite impressive in an incompetent sort of way, I suppose.

I remember being so happy when I got accepted onto the Paramedic training course. I’d been working on and off in an investment bank (it took several attempts to escape). The whole shirt and tie office thing just wasn’t right for me so getting onto that course was my way out.

I started off writing screenplays. I think that was due to becoming a little frustrated with my favourite television shows and believing that I could do a better job. The US series especially, tended to have a lot of ‘filler’ episodes when there are 22 or more in a season. …Still do.

The first screenplay I ever wrote faded in to reveal the imposing hallway of an investment bank. The main character watched his boss enter through the unnecessarily Hagrid-sized doors below before throwing himself down the main staircase – a painful and bloody; albeit well worth doing way of getting a day off (an only slightly embellished version of real life).

My heroes are the frontmen of my two favourite bands: Max Bemis of Say Anything and Ace Enders of The Early November. I’d also add to the list a few of my very favourite screenwriter/directors such as Joss Whedon, Shane Black, Alex Garland and Martin McDonagh.

So many… Too many. Stand next to me for five minutes – ten at a push – and I guarantee I’ll say or do something stupid.

I’m not sure my friends are any less useless than I am so… phone a stepdad.

Both. And I live in Bournemouth next to the beach to make the most of the sun when/if it ever comes out.

I am far too tough and manly (some would say intimidatingly so) to cry at a book. If you were really determined – you could put one of the old episodes of Scrubs on where Dr Cox has a proper meltdown and smashes up a hospital room – that should do it.

Both of the Alan Partridge books made me laugh a lot.

Don’t listen to me.

Ok. I won’t. Thanks Daniel!

Come back tomorrow when I’m one of the victims on the Ragdoll Blog Tour and you can read my review. 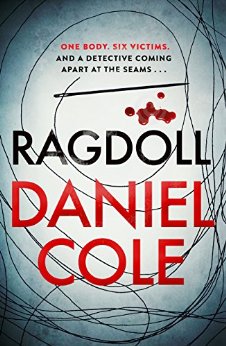