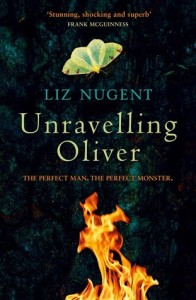 I was lucky enough to read this brilliant debut novel early, and also lucky enough to persuade Liz Nugent to answer some questions for me about the book – here is what she had to tell me.

Tell us a little about how idea for the story started coming together.

I initially wrote the first chapter as a short story and I was delighted when it got shortlisted in a competition. I had raised a lot of questions within those 1800 words and afterwards, I wanted to find out the answers, so that’s how I went on to develop it. I picked a few characters mentioned in the short story and began to tell it from their perspective. I had the first three chapters done and then put them aside for a few years while I was busy with other things but the plot was percolating in my head. Eventually, I just dropped everything for a week and went away to a writers retreat and plotted the entire novel, and after that, it was just a matter of finding the time to write it up.
Oliver is an enigma and a fascinating character – how much did he change over the course of the writing?

I deliberately wrote an utter monster when I started out, but as I was writing from his point of view, I realised he doesn’t think he’s a monster. He will defend and justify everything and that led me back to finding his humanity and exploring what could have shaped his personality. By the time I was finished writing him, I could not condone his actions, but I could understand them. He is as much a victim as everyone he hurts along the way. His arrogance is a smoke-screen for his overwhelming insecurity.

The characters surrounding Oliver all view him very differently – did you have a favourite?

I loved Barney. He’s not intellectually bright like most of the other characters but he probably has more emotional intelligence than anyone else. He really knew how to love, and unfortunately gave up that love because he thought Alice deserved better than him. His fondness and patience with her learning-disabled brother Eugene speaks volumes about his character.

Eugene also is close to my heart. Because of his intellectual disability, nobody would take Eugene seriously, but Eugene is the only one who instinctively knows that Oliver is bad. Eugene is the prophet of the story.
We only really hear about Alice via others – would you have liked to give her more of her own voice?

I had at one stage written a chapter from Alice’s point of view, in the form of a letter to Barney towards the end of the book, but really, her story was already told and it did not add any new information. I had wanted her to say to Barney ‘I’m sorry, I was wrong’, but it didn’t make sense as a chapter in itself. I think Alice fell in love with Oliver because of his stories and the effect they had on Eugene. She was shocked and flattered that someone as handsome as successful as Oliver should take an interest in her. Throughout their marriage, she always felt that he was more important. Her needs were secondary.

I don’t really want to say anything yet because I’m not even at the plotting stage yet and it could all change. I’m currently reworking the first three chapters for the seventh time. They have to be right.

In bed before sleep. I just started The Luminaries last night. 800+ pages! It’s so big that I’m thinking of getting a bigger bed.

I find that I have to write first-person narrative. I have to live in the character’s head to know what they sound like.

Ulysses. To my shame, I’ve never read it but if I was on a desert island, I’d be forced to!

Oliver Ryan is a handsome and charismatic success story. He lives in the leafy suburbs with his wife, Alice, who illustrates his award-winning children’s books and gives him her unstinting devotion. Their life together is one of enviable privilege and ease – enviable until, one evening after supper, Oliver attacks Alice and puts her into a coma.
In the aftermath, as everyone tries to make sense of his astonishing act of savagery, Oliver tells his story. So do those whose paths he has crossed over five decades. What unfolds is a story of shame, envy, breath-taking deception and masterful manipulation.

To say this book was gripping would be to put it mildly. And I don’t think I have seen a book so aptly titled in a long time. Unravelling Oliver is exactly right. Oliver and Alice seem to have the perfect marriage – he writes childrens books, she illustrates them, and a fair few people are envious of what they have together. Then one night for no apparent reason, Oliver beats Alice, severely and without mercy. But why? What exactly made him crack?

What follows is a compelling and comprehensive “unravelling” of the man behind the mask – told from various points of view, including Oliver’s, we begin to build a picture of the true nature of both the marriage and the people. As those that crossed Oliver’s path over the years tell their story you will be  fascinated, sometimes horrified but always urged onwards, unable to look away.

This is terrific writing because there are many strands to this one – Oliver’s childhood, his formative relationships, background filled in by those who knew him. The juxtapositions between how they view Oliver and how he views himself are completely and utterly engrossing…as an  intriguing look at one man’s psyche this works perfectly. I was completely and utterly unravelled myself.

I won’t say too much about the other characters you will meet along the way – they are all extraordinarily well drawn and as much as you learn about Oliver you will learn about them – and possibly fall in love with one or two. I know I did. And this has a great “finish” to it as well. Clever. Loved it.

As an intelligent psychological suspense novel, this is top notch. If you enjoy a book that gets to the heart of people then this one is for you. Highly Recommended.