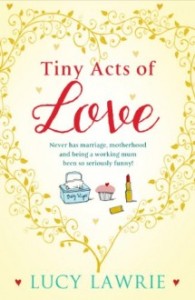 I recently read Lucy Lawrie’s debut novel “Tiny Acts of Love” and it headed straight into my “will read over and over again” chart, a wonderfully witty and insightful novel about new Parenthood which will capture your heart whether or not you have ever been a first time Mum or Dad. I caught up with Lucy and asked her a few questions and here is what she had to tell me.

Tiny Acts of Love captures new parenthood SO well. Is it based on any of your own experiences?

The events in the book aren’t based on my own life, but I did draw on my own experience to capture Cassie’s state of mind as a new mum. I remember how, in those first few days and weeks after the birth, I saw everything in terms of survival – whether that be making it through another sleepless night, getting Emily to take a feed, or even pushing her pram through the park, which had suddenly become a terrifying place, full of unpredictable dogs and sinister-looking pigeons! I was on high alert all the time and it was exhausting. But, as well as that, I wanted to capture the funny side of parenting, and those moments of sheer joy that come out of nowhere, when it feels impossible that you could love anybody so much.

Are any of the characters based on real people?

There’s a lot of me in Cassie, but she’s still her own, quite distinct, person. Often, while writing the book, I used to ask her out loud what she thought about things – once I even wrote her a letter to ask why she didn’t get on with her mother, when I felt she wasn’t telling me the whole story! As for other characters, I suppose you inevitably borrow bits and pieces from people you know – a mannerism here, a particular speech pattern there, or perhaps a certain sort of mindset. But I wouldn’t base a character squarely on someone I knew. I don’t think you could successfully do that anyway – characters always change as you progress with the writing. They become their own people, in all sorts of ways you never predicted. That’s the most magical part of writing.

Do you have a personal favourite character from the book?

Jonathan was lovely to write. He kept saying things that made me laugh. Out of everyone, he surprised me most with how much he grew and evolved. In the first draft of the novel it was all about Cassie. By the final version, it was as much about him, too, and his journey as a new dad, a husband and a son.

I’m going to miss Cassie – can you imagine a sequel in the future ?

I’d like to write a sequel at some point, yes. I’d need to throw some more problems at the characters, though, which feels like a bit of a shame! I can just imagine Cassie rolling her eyes at me, asking me to give her a break! I think I’ll let them live happily ever after for a bit first, before I start bothering them again.

I love Alexander McCall Smith’s books. My ultimate comfort reads are the 44 Scotland Street books, which are set in Edinburgh, my home town.

Tea, coffee or other?

I like herbal tea – peppermint, and also some strange lime and ginger concoction I’ve recently grown fond of. My vice is Diet Coke – I always have one in the afternoon, and two if I’m particularly tired. (Actually, who am I kidding – I always have two!)

3 people alive or dead you would have over for dinner.

I’d invite Emily Dickinson, if she’d leave her attic room, and also Charlotte Bronte. That might get a bit intense, though, so we’d need someone to balance that out. Can I invite a fictional character? I’d love to meet Anne of Green Gables. I think she’d have us all giggling!

Thank you SO much Lucy.

Surviving motherhood? It’s all about having the right network. Lawyer and new mum Cassie has a husband who converses mainly through jokes, a best friend on the other side of the world, and a taskforce of Babycraft mothers who make her feel she has about as much maternal aptitude as a jellyfish. Husband Jonathan dismisses Cassie’s maternal anxieties, but is he really paying attention to his struggling wife?

Gosh and Golly this was an amazing read. From the brilliantly hilarious but absolutely real opening few pages, where the immediate aftermath of Sophie making her debut into the world become clear to new Mum Cassie, throughout the heart wrenching, glorious intensity of the first year of childcare, this one will have you laughing out loud, shedding the odd tear, completely immersed into the ever changing maelstrom of life and nodding sagely along as Cassie and Husband Jonathon traverse the waters of that wonderfully ironic thing called Parenthood.

At turns both emotional and heart warming, the very real highs and lows of maintaining a relationship under the sheer pressure and joy of having a new member of the family are SO well described here, alongside an absolutely insightful and realistic look at how becoming parents can affect both men and women. One of the things I absolutely loved about this was the fact that, although it is mainly Cassie’s story, it avoided the pitfall of allowing it to be all about Mum. Jonathon is well drawn and just as realistic as Cassie – the hopes and fears and dreams and nightmares are just as real for him as for her.

Using a set of absurd yet extraordinarily believable set of events that see Cassie reconnecting with her first love, helping a client with a workplace safety Supernatural issue ( the night of the documentary had me in stitches) and desperately trying to live up to the expectations of the absolutely hilarious but lovely BabyCraft crew, Lucy Lawrie takes us on a journey of emotional depth, ingenious observations and absolute understanding of post natal perceptions and sensitivities. If you have ever been a new Parent every moment of  this novel will resonate with you. If you have not, you are still in for a fantastic and invigorating peek into one fictional family’s life.